The decline of the Indian bullfrog was reported recently in a New Scientist article. But, it may be premature to conclude that the species is doomed. 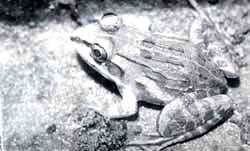 IN A RECENT article, entitled Decline and Fall of Amphibians in the New Scientist dated June 27, mention is made of the declining population of the common Indian bullfrog, Rana tigerina, attributed primarily to the harvesting of frogs to meet the Western culinary demand for frog-legs. How the New Scientist writer came by this information is not clear but, after the ban on the export of frog-legs in the mid-1980s, there has not been any large-scale exploitation of this species anywhere in India.

There have been attempts to estimate the population, rates of harvest and the decline of the Rana tigerina in India since 1979. The earliest work along these lines is that of Humayun Abdulali of the Bombay Natural History Society who pointed out that the harvest of frogs had increased from 1,500 tonnes in 1963 to more than 10,000 tonnes in 1983. This meant that at least 40 million frogs were harvested in 1983 alone, assuming an average frog weighed about 250 gm. This is certainly an underestimate as most big frogs weigh upto 300 gm and large bullfrogs weigh between 400 and 800 gm, though they are generally rare.

Forty million frogs in a year is a frighteningly large figure. However, as these include other species such as the Rana hexadactyla, Rana crassa and Rana cyanophlyctis, it is difficult to judge how much the bullfrog has been exploited, even though the reports say it is largely bullfrogs that are collected.

There is no doubt that the indiscriminate, year-round harvesting of bullfrogs has certainly affected their number, at least locally. The simplest and most convincing pointer to this is that the larger frogs (not less than 100 gm) are more likely to be caught. Frogs of this size are sexually mature and ready to breed. Mature female bullfrogs are capable of laying upto 20,000 eggs, depending on their size.

There has been little careful study done on the population structure and dynamics of the bullfrog. A recent study conducted in Andhra Pradesh suggests there are 1.5 males to every female but whether this is because of overharvesting of females or because the males are easier to locate is still not proved. There have been few attempts at estimating densities, too. Abdulali reported in the early 1980s a density of 5.2 bullfrogs per ha in and around Bombay. Later estimates from the paddy fields around Madurai set a much higher figure of 500 per ha.

Anil Gore of Pune University contends that if the Maduri figure is taken as a reliable estimate and if the bullfrog is present all over India in comparable density (except in the arid zones), then we have exploited only one-tenth of our potential frog reserves. His inference is based on a mathematical model utilising all the available data on this species.

Though 500 bullfrogs per ha may reflect only a local phenomenon, I consider Abdulali's estimate of 5.2 frogs per ha as too small. While studying amphibians in south India, I have come across the bullfrog in a number of places between Maharashtra, especially during the rains, and Kanyakumari. In coastal Karnataka, I found eight large bullfrogs trapped in a partly dug well in the middle of an open forest. Considering that bullfrogs generally do not move about very much, it is plausible they were just a small proportion of a much larger population within an area of about two ha.

The Indian bullfrog is a very generalised habitat user, although most studies on the species have been done in paddy- fields and village ponds. A substantial bullfrog population may be found within forests and along hill streams throughout the Western Ghats, for instance, and also in a variety of non-agricultural areas, but in apparently low densities. Large bullfrog gatherings in agricultural areas is primarily due to the more permanent source of water and food. Bullfrogs also tend to gather in paddy fields where smaller frogs -- its prey -- tend to abound.

Estimating the population of the bullfrog correctly to assess its status is not easy even today, as there are difficulties in the field identification of the species. The bull-frog is often confused with the very similar looking Jerdon's bullfrog, Rana crassa.

Considering all this, it would seem that making statements about the status of the Indian bullfrog is quite premature. More studies are essential and they must be non-destructive. They must be designed in such a way as to attribute changes in the local population to either direct human exploitation or other environmental influences. Until this is done, statements such as those in the New Scientist article are unacceptable.

J R Ranjit Daniels is a research scientist at the Centre for Herpetology, Madras Crocodile Bank.