Though programmes involving villagers in the regeneration of forest lands have been successful, caution should be exercised while bringing new areas under such programmes 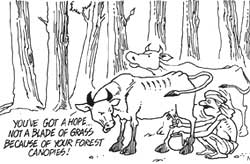 THE LIMITED success of social forestry on non-forest lands has shifted attention to forest lands that form the bulk of India's lands that are uncultivated but capable of supporting vegetation.

In 1988, the Union government revised its timber-oriented policy and asked state governments to treat subsistence requirements of forest-dwellers as first charge on forest produce. Then, in June 1990, the Centre encouraged several states to involve village communities and voluntary agencies in the regeneration of forest land. A few accepted these guidelines in principle and with donor assistance, they have initiated joint forest management (JFM) programmes.

The Centre's guidelines are based on the experience of a pilot project begun in the 1970s in Arabari, in southern West Bengal. The project involves village communities protecting degraded sal forest lands in return for the villagers being given all non-timber forest products (NTFPs) and a 25 per cent share of the timber.

This arrangement proved quite successful. First, it demonstrated that with the incentives listed, villagers would protect the forests from fuelwood-cutters and, second, with such protection, the sal would rapidly regenerate due to its ability to coppice. Besides sal, a number of productive species normally associated with sal also began to flourish, which led to a steady rise in the income of women collecting NTFPs.

Senior state foresters were so impressed that by the mid-1980s, they were advocating the extension of the project to similar ecological zones throughout southwest Bengal. By the end of 1991, community-based forest protection committees were responsible for approximately 200,000 ha of forest land.
It is too early to pass definitive judgement on JFM's applicability in other states. Critics contend community participation is only an empty slogan, or that it can work in only small areas and in exceptional circumstances, or that the rigid stratification of village society inhibits the development of institutions representing a common will. In the face of positive evidence of community participation from diverse agro-ecological zones, such views appear simplistic and overstretched. There are many instances of people who, on their own initiative, started protecting forests. Chipko and Sukhomajri are the best known of these initiatives.

In other areas, growing resource scarcity has spurred many communities to take unilateral action to protect their disturbed environments so as to allow natural regeneration. Moreover, if the most effective local institutions are assumed to develop in small communities where people know each other, it should be remembered that most forests in India are located in the hills, uplands and tribal regions, all of which have ethnically homogeneous communities living in small villages.

While the regeneration of 12 million ha (those with good root stock) of the estimated 30 million ha of degraded forest lands appears possible, making it a reality depends on a number of considerations.
It should be noted, for instance, that a share in the final produce itself, which would involve several years of waiting, may not be enough to motivate a community to protection, as people need seasonal incomes. In the long run, it is not management that attracts people to forests or forest rights, but the lure of obtaining produce for their livelihood.

In order to seek people's cooperation, it would be better to guarantee they could gather more from forest lands. To achieve this, social forestry would have to be extended to reserved and protected forest lands by switching from species such as teak, eucalyptus and pine to usufruct-based trees such as neem, mahua, karanj, sal and palmyra. These should be supplemented with grasses, shrubs and bushes, to yield fuelwood and fodder in the shortest possible time. Trees, shrubs and grasses must be developed on degraded forest lands to meet the people's livelihood needs. Where a large number have claims to forest produce, solutions involving low-management and low-value output -- but high biomass -- are more likely to succeed. Pragmatism suggests technology is easier to change than institutions.

One problem with over-promoting JFM is that it may lead to massive donor interest and funding support beyond the capacity of forest bureaucracy to absorb and implement. The technical skills necessary to develop different silvicultural systems are also insufficient. For instance, research on the economic and ecological impact of protection shows that although people's main concern is with fodder, protection for more than six years tends to close the tree canopy and reduce production of grass, which is one of the major incentives for community management.

Care will be needed to ensure that JFM does not just become another development bandwagon. Because JFM is process-oriented, it should not become a product-oriented programme. As such, there may be a need to consolidate the experience to date with JFM. Besides expanding JFM, the capacity of the institutions to support it also should be evaluated and improved where necessary.

N C Saxena is an academician and an expert on forests.