BBC does a Columbus

On September 20, BBC published a report in the Earth News section of its web edition that has had the global wildlife and conservation community abuzz.

In the article, ‘Lost tiger population discovered in Bhutan mountains’, editor of Earth News Matt Walker described the expedition where the BBC team “left (camera) traps at an altitude of between 3,000m and 4,100m” in the Bhutan mountains for many months and returned eventually with footage of two adults—one male and one female. “The discovery,” the report said, “has stunned experts, as the tigers are living at a higher altitude than any others known and appear to be successfully breeding.” Veteran cameraperson Gordon Buchanan, who was on the expedition, was reportedly moved to tears when he saw the footage.

In a world starved of good news about wildlife, the global media lapped up this discovery. The BBC claim was relayed and published widely with no questions asked at all. It didn’t occur to anyone to ask what a “lost tiger population” meant? When was it lost for it to have been discovered now? The BBC team had got the footage for sure, but how did they know where to put up the cameras in the first place? 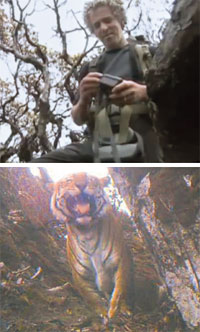 The report does acknowledge the Bhutan Ministry of Agriculture and Forests and forest guard Phup Tshering, but the heroes of the episode are, of course, the BBC crew and conservationist Alan Rabinowitz, president of conservation organisation, Panthera, and leader of the expedition. Walker credits Rabinowitz with having “suspected that tigers may also be living at higher altitude, following anecdotal reports by villagers suggesting that some were roaming as high as 4000m.”

The matter begs serious questioning: if people in the area already knew about the tigers, how can anyone claim their discovery? Why does local knowledge continue to be secondary to television crews and scientists?

BBC’s claim is also questionable because there is considerable evidence of the presence of tigers at high altitudes. For instance, a 2001 report of WWF-Bhutan says that in “September 1999, a camera trap set up by a wildlife survey team captured a tiger at 3,400m, the highest altitude ever recorded for a tiger. In its note on the ThrumshingLa National Park, the Bhutanese Tourism Ministry notes, “The park made news in the year 2000 when a WWF-supported survey team captured a camera-trap image of a tiger at 3,000m—the first photographic evidence that the magnificent creatures exist at such high altitudes.”

More recent documents like The Tiger Action Plan for the Kingdom of Bhutan 2006-2015, published by the Nature Conservation Division of Bhutan’s Ministry of Agriculture along with the WWF-Bhutan, and the May 2010 National Tiger Recovery Programme Summary of Global Tiger Initiative also note that the tiger in Bhutan inhabits an altitude of 100m to 4,100m. Another camera trapping study conducted in 2008 in the Jigme Dorji National Park found both pugmarks and pictures of tigers at an altitude between 3,700m and 4,300m. The web page of IUCN’s Red List of threatened species observes that tigers have been recorded in Bhutan up to 4,500m.

All of this has been ignored in BBC’s claim and the plethora of media reports. News website www.kuenselonline.com published a report that noted Bhutanese wildlife conservationists were not calling it a discovery but only more evidence to prove that tigers do roam the jungles of Bhutan at an altitude as high as 4,100m. Sonam Wangchuk, head of the Bhutanese Wildlife Conservation Division noted about a year ago, “We’ve found pug marks and droppings (of tigers) at the Jigme Dorji Wangchuck National Park.”

There are no lost tigers in Bhutan.