Bed and breakfast available, only for a year

Researchers probing parasitism among birds say the hosts are cleverer than those living at their expense. The great reed warbler, for example, accepts cuckoo eggs only to avoid mistakenly throwing out its own eggs. 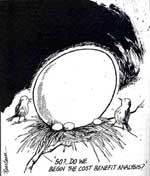 BIRDS are among the most fascinating of creatures. They tirelessly build exquisite nests and care for their eggs and nestlings. But even birds have their parasites, the most famous being the cuckoo, which never builds its own nest and spends no effort in incubating its eggs or caring for its chicks.

The cuckoo sneaks its eggs into the nests of other species of birds. Further, when the cuckoo eggs hatch, the nestlings often damage the eggs and hurt the hatchlings of their foster parents. Thus, quite often the foster parents end up bringing up only the cuckoo's chicks.

Such brood parasitism is quite common among birds and as many as 80 species -- about 1 per cent of all the bird species -- practice brood parasitism. These include the cuckoo, two types of finches, honeyguides, cowbirds and the black-headed duck.
The apparent stupidity of the host birds seems to help the parasites. The only explanation that researchers have been able to offer so far is that we are in the midst of an evolutionary arms race between hosts and parasites and an equilibrium has not yet been reached. Though such an explanation may well represent the truth in many cases, this hypothesis -- called the "evolutionary snapshot" hypothesis -- is in some ways an expression of helplessness. Mathematical models are somewhat useful in simulating an evolutionary arms race but, by themselves, cannot tell us if this hypothesis is correct.

Another problem with accepting the evolutionary snapshot hypothesis is that, in some ways, it amounts to admitting the hosts are not smart enough, at least at this stage of evolution.

The absence of evidence in favour of the snapshot hypothesis itself might be sufficient reason to follow the "equilibrium" hypothesis, which says that today's situation represents an evolutionary equilibrium, but hosts are prevented from perfecting their defences due to other forces. The advantage of such a hypothesis is that it compels us to discover these forces.

Israelis Amotz Zahavi and Arnon Lotem from the Tel Aviv University and Hiroshi Nakamure of the Shinshu University in Japan, argued there must be some good reason why the hosts do not successfully recognise and eject the parasite's eggs. They studied the cuckoo (Cuculus canorus) and one of its hosts, the great reed warbler (Acrocephalus arundinacecus), and found it was the young, inexperienced birds that got taken in, while most of the older, experienced birds managed to successfully reject them (Behavioral Ecology, 3:128-132, 1992).

So, if the cuckoos are smart, their hosts are definitely smarter.

---Raghavendra Gadagkar is chairperson of the Centre for Ecological Studies, Indian Institute of Science, Bangalore.