Before the last trumpet 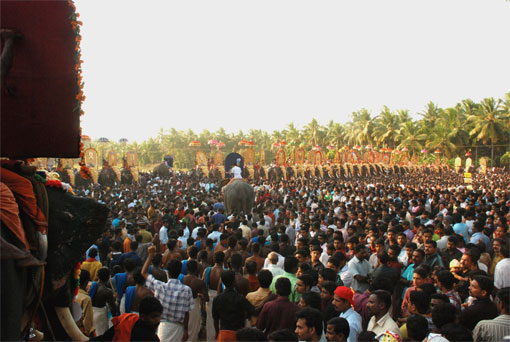 It is that time of the year again when the streets of Kerala echo with clinking of chains. Massive caparisoned tuskers, some carrying idols, rush from one festival to the other.

The association of these "gentle giants", as they are known to writers and poets, with humans has been there for centuries. The earliest possible evidence of taming elephants in India goes back to the Indus valley civilization. Most of our ancient texts, from Ramayana to Arthashastra, talk about elephants being part of wars and arenas. There are also texts like Matangalila detailing the qualities an elephant should possess to be part of the royal stable.

They used to be a symbol of pomp and pride in the past. Today they are seen as a source of revenue. About 70 per cent elephants in the state are owned by individuals who rent out the animal for festivals and processions for huge sums of money. Temple committees and fans of “celebrity” elephants compete to line up the best elephants, and in their passionate involvement, welfare of the animal takes a backseat. They are so extravagant that they are even ready to pay six digit figures to get their favourite elephant for a day, making captive elephant management a multi-million rupee business. Except for a few temples, most prefer male elephants, specifically tuskers, for ceremonies, which may be attributed to their aesthetic value. Ironically, it is the male elephant that most often goes out on a rampage and creates havoc.

Every year, between December and May, which is the festive season in Kerala, an elephant takes part in 100 to 120 festivals extending over 150-200 days. Assuming that the average distance between each festival is 50 km, an elephant travels more than 5,000 km during the period. Worse, most elephants are transported by trucks, which adds to their psychological trauma. In the last three to four years, at least half a dozen elephants were injured or killed in truck accidents. Besides, this is the time when bull elephants enter a state of increased testosterone known as musth and show highly aggressive behaviour. Out of the 100-odd elephant attacks reported during the last festive season of 2011-2012, at least a dozen were the result of the animal being in the state of musth. Photographs of these elephants that featured in major dailies clearly showed temporal gland secretion, a clear indication of musth. Despite such conspicuous evidence, the law and its guardians remain blindfolded. At least 100 people were injured in these attacks; the maximum number of injuries were reported at the much renowned Thrissur Pooram temple festival. Enquiries and public questionnaires were conducted, but to no avail.

This year also similar mishaps have been reported. On January 27, three innocent women were killed by a much celebrated tusker of Kerala, Thechikottukavu Ramachandran. It is also the tallest captive elephant in the country. The incident happened about 10 days after his becoming musth. It was a good move by the forest department to “arrest” the elephant and keep it under custody till further notification. The latest fatal attack happened on February 7, when Vaazhakkalayil Mothi Prasad killed a girl at Alappuzha. Between January 1 and the first week of February, there have been 26 incidents of elephants running amok all over Kerala.

Elephant attacks are not inevitable and can be prevented with conscious involvement and sensibility.

To bring atrocities towards captive elephants to an end, the Kerala Captive Elephant Management rules were framed in 2003. Though first of its kind in India and perhaps the world, the Act like most other government policies is gathering dust. Insertion of microchips for monitoring movement and health conditions of elephants, and ensuring vehicular transportation are probably the only rules that have been implemented so far. However, it seems as if these rules were implemented to minimise the time taken from one location to another, and thereby moving the pachyderm to more workplaces.

The rules state that no elephant in musth shall be put to work and has to be secured properly. This is hardly followed. The number of elephants in musth state that wreak havoc during festivals is evidence enough. Although revised in December 2012, the new rules seem to be much relaxed. For example, clause (16) states sedatives may be administered to elephants if they are nervous. This allows owners to administer sedatives to musth elephants and put them to work.

Although the raison d’être of the rules was betterment of pachyderm management in captivity, lack of its proper enforcement is still a matter of concern. Unless that is ensured, the elephantine problem will only exasperate.

Though there are a very few traditional mahouts left in Kerala, they do not see a ray of hope anymore in captive elephant management. Their revelations of the clandestine operations happening in the field are appalling. Death toll due to intestinal obstruction and other digestive problems has increased from one or two in a year to a whopping 10. This certainly must be a result of potential increase in physiological and psychological stress. Most mahouts admit working continuously for 35-40 days during peak festive season, without a break, which means sleepless nights for the animal. Some mahouts also disclose the administration of anti-androgen tablets to elephants to arrest musth. This seems to have now led to drastic changes in the musth patterns or even absence of musth in several bulls. Absence of musth causes an imbalance in the physiological cycle of the animal, thereby leading to more distress.

Current state minister of forests, K B Ganesh Kumar, has been part of captive elephant management sector for a long time in various capacities. He must implement the management rules aptly to address the problem. Keeping a check on the number of festivals that an elephant is taken for and the distance it travels will also contribute to mitigating conflict. This can be ensured with appropriate decisions from the Forests and Wildlife Department.

Interestingly in October 2010, the Union Ministry of Environment and Forests declared the Asian elephant as National Heritage Animal. While the wild counterparts are dwindling in numbers due to habitat fragmentation and poaching, the captive ones are vanishing too. Let’s keep our fingers crossed that a day does not come when the national heritage animal is confined to postal stamps, wall papers and posts on social networking sites.