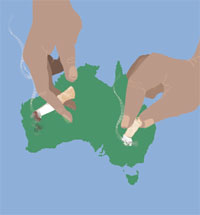 THE World Trade Organization (WTO) appears to be the last refuge of Big Tobacco. Losing their case filed in the Australian High Court against the country’s order that all cigarettes should be sold in plain packaging, that is, devoid of distinctive and colourful branding from December, the industry seems to have shifted its arena to the WTO.

The tobacco is going up in smoke over Australia’s stringent packaging laws which are aimed at discouraging people from smoking. So, instead of bright logos and brand names, cigarette manufacturers now have to settle for uniformly drab packaging under rules which even specify how large a font can be used in printing brand names. Companies also have to display gory images of the diseases that can be caused by cancer. Australia is not the first country to resort to such measures as a public health measure; Uruguay has even tougher rules.

But the tobacco industry, threatened by falling revenues and shrinking markets, has been quick to take these countries to arbitration under bilateral investment treaties or BITs (see "Going up in smoke in Uruguay, Australia"). Their case is that such rules violate their intellectual property rights by infringing trademarks. Philip Morris has been in the forefront of this war, followed by British American Tobacco and Imperial Tobacco.

Some of the tobacco companies have done some clever forum-shopping using a variety of stratagems to defeat such packaging laws. While mounting a legal challenge in the home country (as in Australia), Philip Morris, the makers of the well-known Marlboro brand, has also scouted around for the best BIT to sue Uruguay and Australia for compensation. BITs are such that private companies can sue sovereign government for putative lost profits unlike at WTO where only countries can challenge another. Even better, they can choose from a range of BITs signed by the offending country with other nations so that they can seek the one that least protects a nation’s regulatory space.

While Philip Morris picked a 1991 BIT signed between Uruguay and Switzerland—where its subsidiary Philip Morris International (PMI) is based—rather than the Uruguay-US BIT of 2005, in the case of Australia, it plumped for the Australia- Hong Kong BIT ratified in 1993 instead of the 2005 Australia- US Free Trade Agreement.

But if only countries can mount challenges at WTO how does Big Tobacco come into the picture in the case of the tobacco packaging disputes referred to the apex trade body? Three countries, citing violation of the WTO Agreement on Trade-Related Aspects of Intellectual Property Rights, or TRIPs, on trademarks and geographical indications have taken Australia to WTO, the latest being the Honduras which on October 15 asked for the formation of a dispute settlement panel on Australia’s plain-packaging law. This request signals the end of informal consultations that the Central American country has been having with Australia since April this year.

Trade disputes start with a request for consultations and failing that are moved to the dispute settlement body. The other two countries which have challenged the Australian regulation are Ukraine and the Dominican Republic, neither of which has any significant trade with Australia, much less on cigarettes. Ukraine, reportedly, does not sell any of its tobacco products to Australia but to Europe. All of this has strengthened suspicion that the tobacco industry, which is fighting Australia’s packaging laws on several fronts is behind the moves at the WTO.

It was immediately after the Australian High Court dismissed the tobacco giants’ challenge on August 15 that momentum picked up at WTO.

It is certainly curious. An Australian news report had at the time quoted Trade Minister Craig Emerson as saying that it was “a remarkable coincidence”. According to Emerson, “Ukraine was engaged in informal talks with us up until the High Court win, and then went formal.”

But given that the WTO has exemptions under TRIPs for public health safeguards, Big Tobacco stands a better chance of winning its case under BITs. Investor-state disputes under such treaties make no such allowances and claims of expropriation are viewed more favourably by tribunals which interpret the term very broadly under commercial arbitration. Analysts point out that under international investment law, investors can claim compensation for lost profits even if there is no direct acquisition of property. Any government policy or rule that has a significant impact on an investment could prompt a tribunal to decide in favour of the investor.

In which case, WTO appears to be the choice of last resort. Like a well-armed warrior, the tobacco industry could be merely ensuring that it has a second string to its bow.