Recent research reveals that subjecting night shift workers to eight hours of bright light could bring about a 12-hour shift in their daily rhythms. 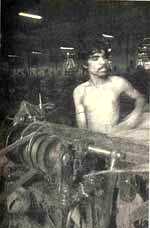 MOST OF us at some point of time have stayed up all night. The next day finds us slightly under the weather. Why does this happen? Why do some people cope better with night shifts, while other find it easier to work early in the morning?

The world we live in is full of rhythms, both geophysical and biological. These rhythms are so pervasive that we take them for granted or overlook them. All living organisms express rhythm in their behaviour, physiology and biochemistry. The rhythms vary in periodicity -- circadian (daily), circannual (yearly) and so on. Together, these are known as biological rhythms (which is quite different from biorhythms). These rhythms are generated and regulated by internal oscillators. However, under natural conditions, these rhythms are synchronised with environmental changes.

Circadian rhythms play an important role in maintaining the health and well-being of any organism, including human beings. Circadian rhythms have been observed in almost all the variables measured, the most well-known perhaps being the sleep-wakefulness cycle. Circadian rhythms include also body temperature and hormone levels. In most organisms, circadian rhythms generate broad patterns of activity and rest.

Changes in behaviour have significant implications -- a kestrel hunts during the day when its prey, the vole, is easily available, but will eat it only just before nightfall. By thus delaying digestion to the coldest part of the 24 hours, the energy cost of both hunting and thermoregulation is reduced. It may seem that this energy saved is a small one, but viewed over a long period, it is huge -- if it were not there, the bird's reproductive output would have been halved. Disruption of circadian rhythms impair the rat's sexual performance and shorten the life expectancy of fruit flies, cockroaches and certain other insects.

However, our "modern" society often tends to ignore the clock within us, as is evident in working shifts and in jet lag. The result includes insomnia, day-time sleepiness, gastrointestinal problems and depression.

Jet lag abates slowly are the body's internal oscillators synchronise themselves with the local time. However, shift-workers are not as fortunate as the time cues maintain their original position and the disturbance is more or less permanent in nature. This poses a hazard both to the long list of night-shift catastophes, including the bhopal gas leak and the nuclear disasters at Three-Mile Island and Chernobyl.

Although night-shift-induced disorders affect numerous people, the problem has received little attention as compared to the efforts that have gone into solving jet-lag problems through chemical intervention -- lithium salts are given to alter the phases of the circadian rhythms.

Chemical intervention, however, is not suitable to alleviate the night-shift-worker's problems, the solution to which must necessarily be cheap, easily applicable and not have any toxic effects. One solution would be to get the workers to sleep in a dark room during the day and arrange for very bright lights in their work-place.

Recent research revealed eight to nine hours of bright light could easily shift the circadian rhythms by 12 hours. Two bright-light periods of five to six hours on successive circadian cycles could also work equally well. So, the solution may be to abruptly shift a shift-worker's sleep time by about 12 hours after the first night of work. This may be felt to be a drastic step that would accumulate sleep-deprivation and result in extreme tiredness. But the circadian oscillators are extremely powerful. Students studying through the night often fall asleep at around 4 am, when the body temperature reaches its minimum level. Later in the morning, the student will feel more alert despite having slept for a shorter-than-usual period.

Another method could be to shift the rhythms daily by smaller durations of bright light in a particular routine.

Both these methods are as yet at a conceptual stage and different ground-level realities have to be considered before they are sought to be implemented. Factors such as fatigue, mood disturbances, performance levels and general health have to be assessed. More work is needed also to determine the optimal parameters for both light and darkness.

Given the initial encouraging results, research in this field should perhaps be taken up more vigorously. Unfortunately, despite the millions of shift-workers in the country, not much work is being done in the field in India.