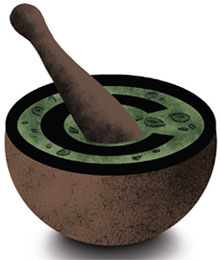 What's good for biodiversity is not always good for business—or so it appears. The long overdue guidelines on access and benefit sharing (ABS) of biological resources notified by the Union Ministry of Environment, Forest and Climate Change (MoEF&CC) in November 2014 is proving to be bitter physic for the makers of AYUSH or traditional medicines who fear their healthy profits will decline. AYUSH is an acronym for traditional Indian medical systems of ayurveda, yoga, unani and siddha apart from homeopathy.

In just two months after the guidelines were issued, states have issued notices to hundreds of units that use herbs and plant resources to make traditional medicines to pay the ABS royalty. The rules, intended to promote sustainable use of bio resources, give state biodiversity boards (SBBs) the power to determine the amount of royalty or benefit sharing to be paid by makers of AYUSH products that are enjoying a boom. But if the cries of protest are anything to go by, industry is unlikely to accept the new dispensation meekly after the free run it has enjoyed for the past decade through successful lobbying.

Although India passed the Biological Diversity Act (BDA) in 2002, the mandated ABS guidelines were held back by the government because of pressure from the AYUSH industry. With traditional systems of medicine increasingly finding favour with patients who suffer from a host of ailments and diseases that the allopathic system is unable to treat, the market has been growing at a fast clip both here and abroad. The reluctance of MoEF&CC to notify the rules for so long is said to have helped AYUSH makers to avoid paying any royalty to SBBs, a sum that is said to run into several thousand crore rupees. An unnamed official of the Kerala SBB was recently quoted as saying the states lose as much as Rs 10,000 crore annually while the apex National Biodiversity Authority (NBA) is deprived of another Rs 5,000 crore.

Under the new rules, domestic and foreign companies will have to pay 0.1 to 1 per cent royalty on their gross sales of products using biological resources and traditional knowledge. Those who fail to do so face jail terms of three to five years with fines. ABS has to be paid by any AYUSH unit that extracts plant based materials for commercial purposes. Domestic manufacturers cannot use these bio resources without getting the permission of their respective SBBs, while foreign companies must approach NBA.

SBBs, fund-starved and champing at the bit all these years, have been enthusiastic in issuing notices to AYUSH units in recent weeks. News reports say that the Kerala SSB, the most exemplary in protecting its bio resources, has issued notices to 800 ayurvedic manufacturers while a newly galvanised Maharashtra SBB has asked 1,500 AYUSH units in the state to comply with the latest BDA guidelines.

But these guidelines are vague and confusing, claims industry which is palpably worried by the hit it will take on profits. For the industry’s lobby group, the Ayurvedic Drugs Manufacturers Association (ADMA), the key issue revolves around what is known as the “normally traded as commodities” or NTAC list. Those plant varieties listed as NTAC are exempt from the purview of BDA.

The NTAC list has been highly controversial. In 2009, the environment ministry had put 190 bio resources on this list, prompting an outcry from conservationists who alleged this had been done at the behest of industry and trade which had brought in the powerful Ministry of Commerce to weigh in on their side. ADMA, which is confronting the newly empowered SBBs, now says the NTAC is being “wrongly interpreted”.

Hopefully, however, the fight between profits and conservation may be more evenly matched this time.