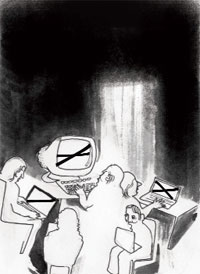 Suddenly, the cyber world knows SOPA, or at least something about it. SOPA stands for Stop Online Piracy Act, the latest initiative by the US to stop theft of intellectual property rights (IPRs), primarily the illegal downloading of music, films and games. SOPA is in the House of Representatives, and it has an equally evil twin in the Senate, PIPA or Protection of IP Act. Both laws have the potential to bring about sweeping censorship of websites that will jeopardise freedom on the Internet.

Thanks to the well-publicised blackout of its website on January 18 by Wikipedia and hundreds of other websites to protest against SOPA, the implications of how the US government can curb Net freedom has hit Internet users across the world. Twitter and Google did not join the blackout. The former said it was foolish and silly, while Google put a black censorship block on its image and provided a link to a page declaring “End Piracy Not Liberty”. But the strike by the other Internet biggies has had an immediate impact with several Congressmen backing off from the proposed pieces of legislation. As a result, PIPA has been shelved until “serious issues” are resolved, while the House of Representatives Judiciary Committee Chairman Lamar Smith also announced postponement of SOPA, saying he took the concerns of critics seriously.

“It is clear that we need to revisit the approach on how best to address the problem of foreign thieves that steal and sell American inventions and products.”

All this may just be a breather because there will be new legislation, altered, of course, but laws that will in any case impinge upon Net freedom. Congressmen have been peddling these laws on an industry-promoted crusade, saying that counterfeiting and piracy costs America billions of dollars and huge numbers of jobs each year. The recording industry is in the forefront of this campaign and so is Hollywood which says it supports over 2.2 million jobs that could be lost on account of piracy.

Those who have been following the crackdown of the US on Net freedom will recall that it has already taken such measures since 2010. When WikiLeaks began releasing embarrassing diplomatic cables about various countries, PayPal was forced to shut down its account because the State Department wrote it a letter saying that WikiLeaks activities were deemed illegal in the US.

And so too, the Department of Justice (DoJ) which, along with Immigration and Customs Enforcement (ICE) agency of Homeland Security, has been merrily seizing domain names for well over a year in order to protect IPRs. In the process, it has blocked perfectly legal sites, some of which have sued the government. But in mid-January as the anti-SOPA/PIPA protests got underway, DoJ got a taste of its own medicine when its website was made inoperable. Hacking collective Anonymous shut down the DoJ website on January 19 in retaliation for its closure of file-sharing website Megaupload—did we hear cheers from some film production companies in India?—and the indictment of four people linked to the popular file sharing website NinjaVideo.net.

While laws are necessary to tackle IPR infringement, SOPA and PIPA show no balance. Payment processors or ad networks have to block the accounts within five days of getting a letter from copyright owners unless their accused customer promises to attend US court hearings, a provision that could be exploited by overzealous IPR holders. And these laws would affect even legitimate organisations which are protected under copyright law. Analysts point out that all this imposes a huge burden on startups that host user content.

Indian ISPs are facing similar problems on account of rules notified under the Information Act 2000. The most lethal are those affecting intermediaries. Although Section 79 of the Act provides a safe harbour for intermediaries, the 2011 rules have too wide a definition on what constitutes unlawful content and makes it incumbent upon intermediaries remove such content in 36 hours. Even Down To Earth is at risk.