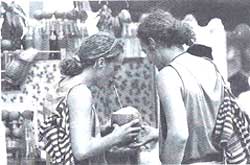 WHEN AIDS first came to Africa, the continent's leaders accused the rich whites of the world of foisting the disease on poor blacks to develop a market for western pharmaceuticals. The Indian government hasn't shown this degree of paranoia, but its requirement that long-staying foreigners be HIV-negative reveals its suspicion that infected foreigners spread HIV and AIDS in India.

The suspicion is unfounded. Of the 242 known cases of full-blown AIDS in India till December 31 last year, only 14 were foreigners. They were deported in accordance with Indian government policy, the logic being that once an infected foreigner is sent away, he or she cannot pass on the virus.

This is true. But, if getting rid of HIV-infected people is the answer to controlling AIDS, then infected Indians should also be shut away (like Dominic D'Souza was in Goa three years ago). But they aren't. So, why throw out a minuscule number of infected foreigners and perpetuate the myth that foreigners are spreading the AIDS virus in India?

The truth is Indians are infecting other Indians through unprotected sexual intercourse, sharing of contaminated needles to inject drugs, use of unsterilised instruments in hospitals and by running blood banks that don't screen out infected blood. Yet, the bogey of foreigners spreading AIDS has gained such acceptability that A S Paintal, then director general of the Indian Council of Medical Research, proposed three years ago that a law be passed to prohibit sex between Indians and foreigners.

The Centre's policy of screening foreigners for HIV is absurd for two reasons. One, it applies only to those foreigners intending to stay in India for more than a year, not short-term, holidaying foreigners with money who are far more likely to spread HIV by seeking casual sex, as Thailand's booming sex tourism shows. The second absurdity is that blood tests aren't foolproof. A test can fail to detect seropositivity in an individual because AIDS virus antibodies need not appear in the blood for many weeks after infection. So, testing a foreigner in this "window period" will show him to be negative even though he's infected. Moreover, establishing the sero-negative status of long-staying foreigners induces a false sense of complacency in them and in the government. An HIV-free certificate doesn't guarantee permanent immunity. Only avoiding high-risk behaviour does.

To be fair, India isn't the only country that tests foreigners and deports them if they are infected. China, Iraq, Libya, Thailand, Cost Rica and Bolivia do the same, and Cuba also quarantines its infected citizens. In contrast, most European nations don't question long-staying foreigners about their HIV status. India should do the same because screening foreigners for HIV shows it is looking for a scapegoat for a national health problem.

It's time we realised the three factors that are responsible for spreading HIV and AIDS in India: spiralling HIV infections among the country's estimated one million prostitutes; infected blood from India's 1,018 blood banks, and sharing of needles by drug addicts in the northeast, upto 50 per cent of whom in some states are HIV-positive.

But heterosexual transmission accounts for roughly 80 per cent of India's estimated one million HIV victims. The challenge is to teach safe sex to India's sexually-active population of 363 million men and women, half of whom are illiterate. This is a stupendous task. Meanwhile, let's stop blaming foreigners for spreading the HIV epidemic.

Arvind Kala is a freelance journalist.