Blood on the Internet

Governments are censoring digital content on the ground that it infringes intellectual ­property rights or offends people. Can they be stopped? 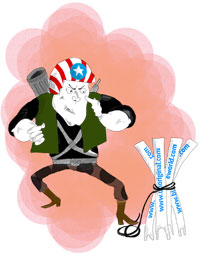 It’s a bit of Iraq and Afghanistan out there on the Internet. Just like the invasion of Iraq was lies, deceit and regime change as George W Bush chased illusory weapons of mass destruction in that hapless country, on the Internet, too, there is an element of fabrication and duplicity as the US Immigrations and Customs Enforcement (ICE) unit of the Department of Homeland Security goes about seizing domain names and shutting them down en masse claiming they are all violating intellectual property rights (IPRS).

And there is something of the style of General David H Petraeus, the commander of the US forces in Afghanistan, in Erik Barnett, assistant deputy director of ice. Last August Petraeus claimed spectacular success by the Special Operations Forces: a total of 4,100 Taliban rank and file captured in the previous six months and 2,000 killed. It turns out now that most (90 per cent) of the captured Taliban had been released within days of being picked up because they were ordinary folks, innocent civilians as official US military data itself reveals. Just as these claims were essential for creating a narrative of victory over evil forces in the Afghan war, Barnett, too, has been trumpeting the success of his domain seizures.

“People told us that we will fail if we seize these domain names, and that we’ll look foolish. People said [the infringers] would come back. But the reality is they didn’t—that was surprising.”

He also explained in an interview that ice only went after websites that were commercial in nature: “We only go after websites that run advertisements, or sell subscriptions or merchandise. We are not looking at community forums or chat rooms. Rather, we are looking for websites that are making a substantial amount of money from these websites.”

Most of this is tosh. Many of the seized domains were chat rooms, plain community forums. Not many of the sites were illegal in any sense. The fact is that ice goes after domain names after a complaint is made by a rights holder but with little idea of how the Internet works. A vast number of sites are back, many of them having reappeared within hours of their shutdown. The collateral damage, however, as in the savage war in Iraq and Afghanistan where civilians bear the brunt of the US and nato offensives, has been pretty high: over 84,000 sub-domains were mistakenly “filtered” or shut down, and many have lost legitimate business.

Now the war has been joined and rightly, too. About half a dozen of the websites have sued the US government, challenging the legality of its domain seizures. One of these, the popular Spanish sports streaming website Rojadirecta had been pretty forbearing with the US government. It had written to ice seeking the return of its domain names pointing out that it was in no way infringing iprs but to no profit. Following an infructuous exchange of mails, Rojadirecta’s parent company, Puerto 80, filed a complaint in a New York court, claiming that the government was not only acting in a mala fide manner but also violating the First Amendment. Interestingly, the Rojadirecta website is still available online with a new url, but Peurto 80 says that losing its original domains has sliced away 30 per cent of its traffic.

The case raises several pertinent issues. Can the government shut down a website simply on the probability that some material that it was linked to, not hosted mind you, might be infringing copyright? Can it seize domain names without advance warning which would have allowed the owners to contest the seizure? Does merely linking to copyrighted material constitute copyright infringement?

It is important to watch how the US government handles this legal challenge because of repercussions across the web worldwide. Here, in India we are headed for volatile times with the passing of the Intermediaries Guidelines Rules, 2011, in April this year by the Department of Information Technology (DIT). “Intermediaries” in this context means any website that carries content and under Section 79 of the Information Technology Act, 2000, dit decrees “due diligence need to be observed by the Intermediaries to enjoy exemption from liability for hosting any third party information”.

That’s a pretty kettle of fish. If any citizen can sue the website host or isps or Internet Service Providers for any “objectionable” content, how on earth are the websites to keep tabs on user generated content? There is also the ipr issue. “Due diligence should be defined and limited to specific obligations,” says Mishi Choudhary of the Software Freedom Law Center who has been campaigning for long for some sanity in the rules. But we will come back to this later. Blood is bound to flow.