Booms are not forever

The recession is a solution, not a problem

There is no mess, no crisis, no meltdown. The world's gdp will rise 3 per cent even after the latest events, estimates the imf (I think it might be 2 per cent). We have got so used to fast growth that the slightest slowdown elicits wails, as though the business cycle has been abolished. We have busts after every boom, and they are exactly what are needed to clear our excesses and imprudence. Recession is a way of cleansing deadwood. It causes pain, just as booms cause euphoria.

We need not believe that an apocalypse is upon because journalists--and ngos--say so. There is no crisis of consumption. There never has been and never will be. The law of conservation of matter says nothing is ever destroyed (or consumed); it only changes form (like carbon to carbon dioxide).The law of conservation of energy says that energy is not destroyed or consumed; it simply changes form (like calorific energy in petrol getting converted to mechanical energy in a car). The law of entropy does lay down some limits. But as long the earth receives energy from an outside source--the sun--there will always be enough energy. It will always be possible to reconstitute carbon and hydrogen from various sources to form fresh fuel. The cost may go up, but we will never run out.

As nations grow richer, fuel costs will rise in absolute terms, but will probably fall in real terms. That, believe it or not, is actually a brief summation of world history. A bump in oil price to US $140/barrel may look huge, yet energy per unit energy of light generated by a wasteful incandescent electric bulb from oil-fired electricity today is actually far cheaper in real terms than light energy from candles in the 19th century.

The great tragedy of Africa and Latin America in the 1980s and 1990s was that western consumption rose fast, but consumption of raw materials did not rise fast, so the export prices of African and Latino producers slumped. The problem was under consumption.

The more general wailing about overconsumption and scarcity of resources is like the playing of an old cracked record over the decades. Few readers are old enough--though I am--to remember the bogus scare in the 1960s on how the world was running out of food. India had two major droughts in 1965 and 1966, so bad that it began consuming two-thirds of the world's entire food aid. Two eminent American academics, Paddock and Paddock, wrote a book, "proving" that India was unviable fundamentally and so should be left to starve, while the world conserved food aid for other countries capable of being saved. Environmentalist Paul Ehrlich wrote reams of rubbish about how high population--India's population at the time was just 450 million--had destroyed all hopes of the country's viability. These chaps would have laughed at any suggestion of "unviable" India becoming a food exporter. Yet that is the case. Then we had the Club of Rome in the 1970s declaring, after the oil shock of 1973 and the overall commodity boom/scarcity that the world was going to run out of all materials because of overconsumption. This too was soon proved to be rubbish, as the commodity price boom of the 1970s was followed by the bust of the 1980s.

Anybody who has seen the travails of the last 50 years should be astounded by the rapid growth of prosperity in the last five years. gdp growth averaged 7 per cent in developing countries as a whole, a rate unrivalled in my lifetime. Even Africa has grown at 6 per cent for five years--fantastic. Will the boom of the mid-2000s end in a bust? Of course--anybody with a basic knowledge of history and economics knows that! But are we worse off than after the last bust? No, we are much better off. 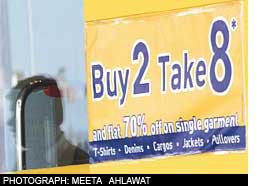 Let me be blunt. Recessions and financial crises are the mechanisms by which the market system punishes the inefficient and rewards the efficient, punishes the imprudent and rewards the prudent, punishes innovations that are unsustainable and rewards those that are. True, recessions also punish bystanders, who gain undeservedly in booms and suffer undeservedly in busts. For them government should provide safety nets. Fiscal and monetary policies should be tweaked to reduce the pain of a downturn and facilitate recoveries. But that does not mean booms should go on forever, and that recessions should be viewed as crises. On the contrary, recessions are solutions, they are correctives. They may be painful, but so are many medical procedures, and the pain is both unavoidable and actually beneficial (to instill a warning against perverse behavior in the future).

The writer is a columnist