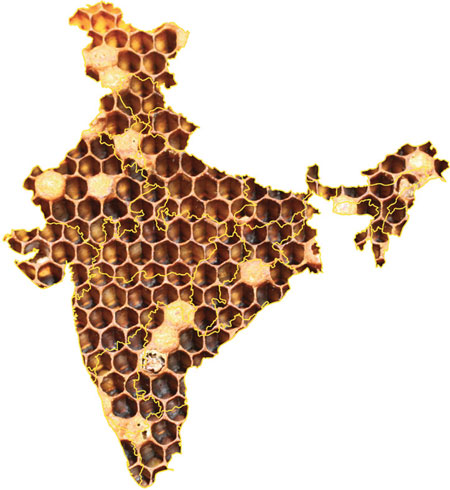 Congress vice-president Rahul Gandhi’s speech in a business association general meeting had an out-of-place contour: local empowerment leading to inclusive growth and that, in turn, helping business to grow. Being a potential prime ministerial candidate and speaking to the CEOs, he advocated power to the pradhans (panchayat heads) to exploit the potential of a country buzzing with the energy of a billion-plus people—beehive is the metaphor he used to describe it.

Coincidentally, he spoke about local governance just a fortnight before the 20th anniversary of the panchayatiraj. On April 23, 1993, the 73rd and 74th amendments to the Constitution became operational, thus, creating the panchayatiraj system for both rural and urban self-governance. It brought to mind his father the late Rajiv Gandhi’s obsessive pitch for local governance. Rajiv Gandhi first introduced the constitutional amendments to make panchayats a legitimate and directly elected third tier of government in the country.

Rahul’s idea of an inclusive and participatory governance process is not new. But when viewed in the context of him being pitched against the growth-obsessive Gujarat Chief Minister Narendra Modi (BJP’s unofficial prime ministerial candidate) and making way to national politics, Rahul’s pitch for local democracy is a subversive advocacy for his political constituency. He eyes the rural voters who are often blinded by the “shining India”, crafted decibel by decibel in television studios. Fearing loss of that “shine”, business leaders are going out of their way to endorse anybody who promises a bit addition to the growth and consequently their business. The middle class—a sizable vote bank dependent on growth—never misses creating a buzz around a political leader who chatters on about deepening the growth model however exclusive it may be. Thus, Rahul’s pitch for local governance is refreshing.

But the new boss of panchayatiraj should go beyond selling it as a mere idea. Particularly, when the country has celebrated panchayatiraj for 20 years, of which 13 years were under the Congress-led regimes at the Centre. Panchayats have moved from being a cultural reality to a constitutional one and now should have been in a consolidation phase to deepen participatory governance. But it has not happened.

There are 0.24 million panchayats in the country with 2.8 million elected representatives. It makes them the beehive of direct democracy. In a village you may not find a tube well but it will have a panchayat member. Arguably, this is the only government among the three—local, state and Central—where elected members implement development programmes. A prime minister does not have the power to sign cheques for programmes but the sarpanch has. Just to get a sense of their power and authority, consider this: panchayats implement close to Rs 70,000 crore of Central government development programmes. On the accountability front, a panchayat member is technically more accountable than other elected members. In a few states voters can recall them; in most of the states government can throw them out. Not to forget that voters throw out more panchayat members than MLAs or MPs and more often.

It is also not that panchayats have not made a dent on the highly centralised and exclusive form of governance India wanted to dilute 20 years ago. The first sign that direct democracy is taking roots is the unusually high voter turnout in panchayat elections. Modi, who has been championing consensus-based election to panchayats in Gujarat against election through voting, has been facing opposition. Many business deals are stuck because of opposition from panchayats. And for local leaders it is no more easy to get elected by bypassing local issues like land acquisition and diversion of water for industrial use. Just five years ago it was hard to imagine that the 13th Central Finance Commission would award panchayats a share in the divisible tax pools like it does to state and Central governments.

It is time to come out of the celebratory mood; panchayats desperately need a new focus and re-energising. They are not inclusive because political and bureaucratic leaderships have treated them with half cheer. While giving them responsibilities signifies great progress, we have not empowered them with the matching autonomy to function. They implement a large number of development programmes but all of them have been designed either in Delhi or in state capitals. While legislators like Rahul and Modi clamour for less government and more governance, they have not shown any interest in transferring their extreme loads of power to local governments. At the state level, members of legislative assemblies have been campaigning against power to panchayats, citing their own declining political clout. It will be desirable if both of them go back to their colleagues in power to pursue devolution of power instead of speaking to business heads.