Brace for another round of widespread rainfall

Is it a ‘western disturbance’?

Is it a ‘western disturbance’?

After the unseasonal heavy downpour in February-end, caused by an upper-air trough that damaged ready-to-harvest crops in many states, another such event is in the horizon. Weather models, such as the Global Forecast System (GFS), are consistently showing the approach of a new upper air trough (the more the consistency in a weather model, the more is the probability of the event happening). This upcoming weather event wouldn’t be as intense as the previous system; hence, rainfall impacts would be comparatively less. Nevertheless, wet days for some places in India are expected and this may not be good news for the wheat growing regions of north India. The crops which survived the heavy downpour of February end will likely be damaged by this upcoming event.

The expected event again raises the question: is it just a “western disturbance” or something more than that?

India Meteorological Department (IMD), in its update  issued Thursday morning, says: "The western disturbance as a trough in mid-tropospheric westerlies, roughly along longitude 60.0°E and north of latitude 20.0°N, persists. It would interact with easterly wave from evening of 13th onwards”. But IMD’s glossary  defines a western disturbance as "weather disturbances noticed as cyclonic circulation/trough in the mid and lower tropospheric levels or as a low pressure area on the surface, which occur in middle latitude westerlies and originate over the Mediterranean Sea, Caspian Sea and Black Sea and move eastwards across north India”. 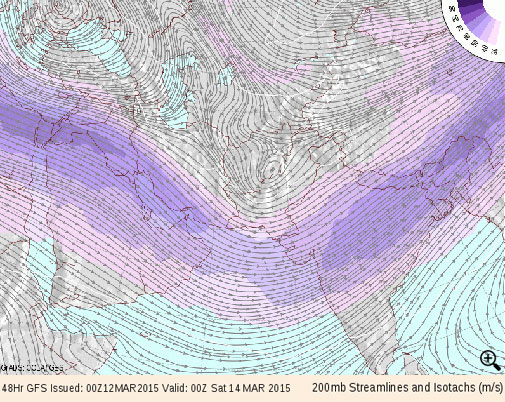 Like in the previous rainfall event, in the upcoming event, the upper air (or upper part of troposphere, say at a height of about over 10,000 metre above ground) shows a trough (the elongated “U” shape of winds over Pakistan and north-west India). One can also see the anti-clockwise spin of winds, which is low pressure centre near Pakistan. This image confirms that the trough is in the upper air as well. So how correct is IMD in calling this feature a “western disturbance”? If one adheres to the IMD terminology, the approaching rainfall would be due to an upper air trough and not just due to the western disturbance.

In the wake of the approaching trough, some rainfall is expected in southern half of Gujarat and parts of Madhya Pradesh today. Satellite images show some cloud cover in Rajasthan due to the approach of the trough.

Some rainfall expected again in southern Gujarat. Severe thunderstorms capable of producing hails and strong lightning are expected in Western Maharashtra, Marathwada, Vidarbha, Eastern Rajasthan and Madhya Pradesh. There is a possibility of strong thundershowers in Delhi- NCR and possibility of hailstorms in Punjab and Haryana.

Heavy rains expected in north India, particularly in Punjab, Haryana. Delhi-NCR and most of Uttar Pradesh will get good amount of rainfall. As a result, maximum temperatures will be less, leading to a cold day.
Some water logging can be expected in these regions due to rains. Fresh round of snowfall expected in higher reaches of western J&K and Himachal Pradesh.

Decrease in the rainfall in Maharashtra and most of Madhya Pradesh. However, rains will move towards eastern states like Bihar, Jharkhand.

Decrease in rainfall in northern India. However, some rainfall will continue on this day, leading to another cool day.

Weather will normalise from Tuesday

Mangoes and wheat in Maharashtra, wheat in Punjab and Haryana were severely damaged in the last episode of heavy rains. Farmers in Maharashtra continue to face back to back weather events because of the ongoing phase of thunderstorms and hailstorms in the state. Multiple places in Marathwada, western Maharashtra and Vidarbha have reported rains, hailstorms this present week. The ongoing event has damaged the crops which had survived in the previous severe weather events such as hailstorm in Nashik region in December 2014, hailstorm in west Maharashtra, Marathwada during February 10-11 and the February 28- March 2/3 rainfall event.