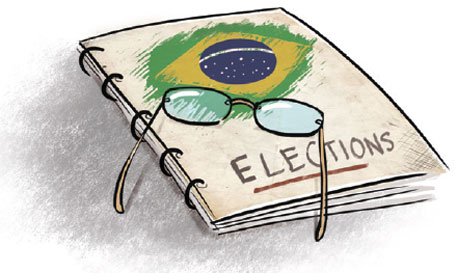 The recent elections in Brazil have several similarities with India’s last general elections in April-May. Like in India, Brazil’s ruling government faced the challenge of a sliding economy, often cited as the fallout of a large number of welfare programmes. Like the then Indian prime minister Manmohan Singh and his United Progressive Alliance (UPA), Brazilian president Dilma Rousseff faced charges of corruption and of leading an inefficient delivery mechanism of welfare programmes. Both the regimes were facing anti-incumbency. So, Rousseff’s victory, however providential it may be, holds lessons for Indian politicians, particularly for the ruling National Democratic Alliance led by Prime Minister Narendra Modi.

Let’s look at how Rousseff won the elections. She won by three percentage points—the narrowest margin in the country’s modern history. She defeated Aecio Neves, a centre-rightist, just like Modi. In 2013, she faced protests of mostly middle-class voters against corruption and inefficient service delivery. One can draw parallels with public protests in India on similar issues two years before Singh was to face elections. Small wonder that Neves got the decisive number of votes in the country’s economically better off south-east and southern areas. But like in India, the Brazilian elections turned into a referendum between social spending and economic growth. Social spending was termed as doles and economic growth as development. Rousseff scraped through by getting a bit more votes in the poor areas. And this is where the lesson lies.

Rousseff’s Workers’ Party and her predecessor Luiz Inacio “Lula” da Silva scripted the world’s most lauded welfare programmes. The UPA had shaped most of its welfare programmes by taking cues from these Brazilian experiences. Its direct cash transfer programme is a clone of one such highly successful Brazilian programme, which helped one-fifth of Brazil’s population, or 40 million, escape the poverty trap in just 12 years. The measure of income inequality—the Gini coefficient—improved from 0.56 at the beginning of Lula’s victory to 0.49. This shows equality in income. The economy also grew fast during Lula’s regime. During Rousseff’s time it slowed down; the fiscal deficit widened; corruption increased; and service delivery became inefficient. The Western media predicted an imminent defeat for her party.

Modi’s dilemma will be similar to Rousseff’s even though he will face elections in 2019. His government has begun diluting or dismantling many of UPA’s flagship programmes, such as the rural wage programme and food security law. The same can be said about long cherished laws like the Forest Rights Act and the Land Acquisition Act. All this to get the economy back on the growth trajectory, which Singh enjoyed during his first tenure. Looking at the Brazilian experience, it is clear that the poor, middle-class and rich vote on the same broad issue: efficient service delivery. It is just that the definition of “service” is different for different groups. For the rich, the service is facilitation of business while for the poor, it is access to basic services like wage and food. Modi may bring back economic growth and thus retain his middle class voters. But these votes alone cannot ensure his re-election.

In the last elections, rural and poor voters might have voted Modi because of anti-incumbency factor and poor service delivery of the UPA. But it is surely not a mandate to do away with rural programmes. As the new government starts shaping up its rural policy, it must keep in mind that the programmes implemented by the last government have not necessarily been rejected by people. The rural job guarantee programme, for instance, has been projected as the mother of all bad schemes. But the fact is it is the programme where Indian rural population participated the most in the past six decades. Any changes in this to fix the economic downslide will have an electoral side effect.