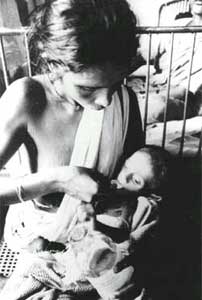 " every man, woman and child has the inalienable right to be free from hunger and malnutrition in order to develop their physical and mental faculties" -- a lofty ideal proclaimed at the 1974 World Food Conference when governments examined the global problem of food production and consumption. However, more than 20 years later the goal of eradicating hunger, food insecurity and malnutrition "within a decade" as expressed during the conference, has not been reached.

Nearly one quarter of the world's population (1,319.8 million) lives in the south Asian region -- Bangladesh, Bhutan, India, Maldives, Nepal, Pakistan and Sri Lanka -- and are dependent on agriculture, fisheries and forestry for their livelihood. The issue of food security is not only a question of access to food but also a question of personal and collective values of the communities. We believe that food security has different meanings in the North and South.

In the South, it essentially means availability of food under adverse conditions and physical access to alternative 'natural' sources of food. These naturally available foods can be harvested as common property resources and often remain available to the community as last crops under stress conditions. On the other hand, in the North the question of food security is essentially tied up with the concept of exercising command and control over other nations and communities. It is, therefore, linked to the domination of the world production of food through global food market. It is time that on behalf of south Asian communities, we squarely challenge the politics of food security and turn it to express what it should indeed mean now -- freedom of communities from the global domination of food production and food marketing by few nations through a handful of transnational agro-business companies.
During the South Asian Workshop on Food Security, held at Tangail, Bangladesh (August 18-20, 1996), we read and discussed the document, Towards Universal Food Security: Draft of a Policy Statement and Plan of Action and seven technical papers released by the Food and Agricultural Organization ( fao ) in preparation for the World Food Summit ( wfs ) (November 13-17, Rome). We welcome the fact that the world leaders are discussing the vital issue of our time: food security. However, there were certain gray areas of concern and dissatisfaction.

It is claimed that wfs will try to develop a "global perspective" in dealing with all aspects of food security and will address the "root causes of hunger and malnutrition". But in fao documents, the poor are blamed, explicitly or implicitly, for their poverty. The fundamental question of existing economic system and its connection to poverty has been suppressed and evaded.

It is important to us that the question of access and availability of food is seen primarily as a question of production of food -- its relations and structures under which food is produced and distributed. The fao document totally ignores or denies that there is a connection between who is producing and controlling the world food production and how it is produced and marketed. We strongly feel that by evading the question, fao is indeed hiding the real root cause of hunger and is playing into the hands of transnational agro-business companies.

What the wfs can, however, seek to achieve is to sustain the North-South dialogue for resolving the food crisis and double efforts to promote intra-regional trade for greater food security. Common property regimes that contribute to food security should be maintained and protected. Further, those communities that have been deprived of their common property resources should regain the access to and control over these resources. Also, agrarian and aquarian reforms are needed to ensure that farmers, fisherfolk and other rural communities gain access, control, ownership and management of productive resources. Science and technology research must be reoriented to promote sustainable agriculture practices.