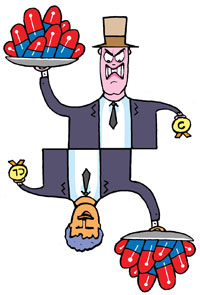 India’s pharmaceuticals industry tends to be in the eye of the storm for one reason or the other. If it is not about its aggressive generics thrust globally, it is about high-profile patent infringement cases at home and abroad.

The gamut of laws governing the sector, therefore, are keenly watched and contested for their impact on foreign companies operating here, most of whom view this country as a market with immense potential. It is not surprising, therefore, that a discussion paper put out by the government on measures to combat the high prices of life-saving drugs in India has provoked an outcry from drug multinationals and the American administration which guards the interests of this lobby zealously.

The latest salvo was fired on September 1 by trade officials and lawyers representing the US pharmaceutical and biotechnology industries. But India was in good company. Brazil, Russia and China were also targets as the meeting was devoted to the troublesome intellectual property rights (IPR) regime of these four countries, which form the BRIC group. The countries in the group have attracted the special attention of the rich nations because their economies are viewed as the most dynamic among the emerging ones, and because they challenge the global patent regime.


The September 1 conference was the third of the “BRIC effect” meetings organised by the Washington-based US Chamber of Commerce and its Global Intellectual Property Center, this one devoted to “IPR and future paths for US policy.” While little has emerged from the meeting of what their future course of action will be, the Americans made clear their displeasure over several policy prescriptions made by Brazil, India and China to safeguard the health of their people.

While Section 3(d) of the Indian Patent Act, aimed at preventing the evergreening of patents by innovator companies, was one of the usual suspects, newer concerns were listed by speakers at the meeting. Chief among these was compulsory licences. A compulsory licence or CL is issued by the government, or its arms, such as the Competition Commission, to third parties to produce and market a patented product or process without the consent of the patent owner. This is intended primarily to ensure access to life-saving drugs to people and is a provision recognised by the WTO’s Agreement on Trade Related IPRs or TRIPs.

On August 24, the Department of Industrial Policy and Promotion (DIPP), the nodal agency for patent policy and laws in India, had put out a discussion paper to “develop a predictable environment” for the use of CLs in view of the increasing concern over takeovers of Indian generic manufacturers by multinationals. As the paper pointed out, three of the top 10 pharma companies in the country are now multinationals. “There are increasing concerns that if such a takeover trend continues, an oligopolistic market may develop which may result in a few companies dictating prices of drugs critical for addressing public health concerns.” The concerns relate to frontline diseases like HIV/AIDS, Hepatitis C and cancer.

The problem for the government is: if large Indian generic companies which have the capability to execute CLs are themselves taken over, then the regime of cheap and effective drugs would be jeopardised. As the government wakes up to the new threats, (the nature of such threats is pointed out in ‘Choking access to drugs,’ Down To Earth, August 15, 2010) it worries that foreign companies may use the marketing channels of the Indian companies they have taken over to sell higher cost patented drugs or branded generics rather than the cheaper ones sold earlier.

The short-term options before the government is to invoke the Competition Act to look for anti-competitive agreements or abuse of dominant position and initiate suitable action; review the policy on foreign investment for pharma companies (100 per cent investment is now allowed automatically); or expand the price control to a larger number of drugs. It is fixed on CLs for the moment.

Within a week, the DIPP paper was causing ripples in the US. The irony is that the developed countries themselves which have made profligate use of CLs while none has been issued so far by India.

The US has resorted to CLs under various provisions and, interestingly, some have been issued in cases involving merger reviews and anti-competitive practices. Canada, which had a special CL regime for food and medicines, issued an astounding 662 CLs between 1923 and 1993, points out DIPP. But given the uneven nature of global trade power, India is certain to have a fight on its hands over the use of CLs, however, legitimate these may be.