Are humans willing to accept they could?

Sometimes the days are gorgeous, balmy and calm with the sky a cloudless soft baby-blue. On such days, I am often stuck in a dark windowless auditorium, lecturing about 100 university students in my animal behaviour class. The pull of the day affects us all. I am somewhat less enthusiastic in talking about the computer-generated slides that I am showing, and the class is restless, anxious to get outside to enjoy what is left of the day.

At such times, I switch to discussion mode. I start asking the class questions that can stimulate a conversation and bring out some opinions. The students usually perk up, particularly if the subject is one that really interests them.

One of my favourite topics is do animals think? I start off by asking, how many people believe that humans think? Usually all the hands go up, except for a few contrarians who are not convinced that anyone is capable of thought.

Then I ask, how many people believe that their dog thinks? About half the hands go up. How about cats? Perhaps a third of the hands go up. Somehow, dogs seem to have more followers than cats in the thinking category.

Next I ask how many believe that an ant can think? Almost no hands go up. Virtually everyone seems convinced ants cannot have thoughts. 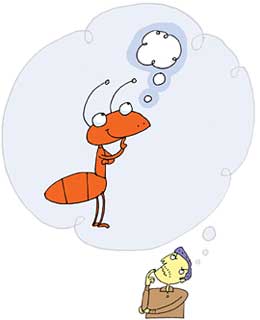 And finally, I ask how do you know? This generates a lot of discussion that usually revolves around the difficulty of proving that anyone, human or animal, can think. The argument usually follows along these lines I know that I can think, so by extension, I am willing to concede that perhaps other humans can think. Can I prove it? No, not really. I can provide a battery of problems to solve that seem to require thought, but I cannot conclusively rule out a stimulus-response explanation that would not require thinking. But, because I am human, I am willing to give the benefit of the doubt to my fellow humans.

So why are many people not willing to give the benefit of the doubt to their fellow animals? The students in my class who have dogs usually tell stories of their dogs doing things that seem to require thought. Can they prove that their dogs think? No, not really. But they can identify with the world that dogs live in and the problems that dogs face, and are willing to give them the benefit of the doubt.

But almost no one is willing to give the benefit of the doubt to ants. My students cannot imagine the world of an ant or the problems that ants might face, and are willing to accept that ants do not think. Can they prove it? No, not really.

But the bottom line is, how do we know that an ant does not think? The answer is, we don't. Unless we are willing to argue from definition. We can define thinking as only a human property, and then we can sit back in great satisfaction that we have solved the problem of animal thinking once and for all.

Con Slobodchikoff, biologist and animal behaviourist, is professor at the North Arizona University. This is extracted from www.reconnectwithnatureblog.com