Can we live forever?

Though all living beings have a finite life span, beyond a certain age, the probability of survival becomes unpredictable. 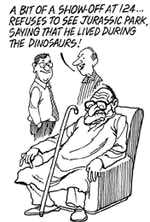 IF ONE thing is certain in life, it is death. In thinking of death, two things come to mind. First, there is a certain moment at which life ceases. Second, even with the most health-conscious lifestyle, luck in avoiding accidents and freedom from illness, the likelihood of dying increases as we grow old.

The fact that death is an inevitable consequence of aging is tied up with the belief that every living creature has a finite span of existence. The maximum life span of our species -- Homo sapiens -- is reckoned to be about 120 years (notwithstanding mythology and reports to the contrary in the popular press).


Clearly, the existence of a maximum life span in relation to the natural course of aging must mean that the longer you live, the less likely you are to continue living. Indeed, a British researcher, B Gompertz, claimed to have discovered a law to this effect, which stated that according to human mortality tables, the likelihood of death doubled every eight years after the age of 35. Gompertz's "law" is fairly widely accepted by demographers.

Unfortunately, the validity of Gompertz's law is difficult to test and the difficulty is most acute in the case of old people. The problem lies in the fact that if we want to estimate likelihoods or probabilities, we have to make a large number of independent measurements, a requirement that is easy to fulfil at the lower end of the age scale.

For example, some 15 million babies are born every year in our country. By knowing how many are still alive on their first birthday, second birthday, and so on, we can easily work out the probability that a new-born child will live for a year, or a one-year-old child till it is two. But it is impossible to translate observations into probabilities if there are say two persons aged 117 and one of them dies within a year: One cannot make a generalisation from just two cases. It is difficult to compute the probability of death per year for the very old precisely because there are so few of them.

Scientists in USA, Mexico and Denmark have cited this stumbling block to justify their research on mortality rates in old-aged flies. Under controlled conditions, insects can be raised in such huge numbers that even with large-scale deaths, many survive until their "maximum" life span is over. Also, unlike humans, insect life is measured in weeks, which means a one-year-old fly is the equivalent of a 400-year-old human. Thus, monitoring the mortality rates of well-fed, well-housed, stress-free flies as they age over a reasonable span of human time is a straightforward matter.

The two groups of scientists worked with different species of flies -- the Mediterranean fruit fly or "medfly" and the standard laboratory "fruitfly". This was just as well, because their findings were similar and astonishing. Both groups showed a marked increase in mortality rates from birth until about 30 days, but after that the rates levelled off. It's almost similar to the decay of a radioactive atom. As we know, there is a certain probability that such an atom will decay within a second; if it does not, there is exactly the same probability that it will decay within the following second, and so on until it does decay. In short, the atom can, in principle, "live" forever without decaying. The fly experiment seems to suggest that -- again in principle -- a fly can live forever!

However to avoid any misunderstanding, I should mention two things. All flies in the experiment did die eventually. The point is that the rate of dying had levelled off, and this was reflected in a few ancients surviving for astonishing lengths of time.

But if you live beyond a certain age, death truly becomes unpredictable. However long the period, there is a finite probability of staying alive until then, albeit in an increasingly enfeebled state. Thus, at present, the answer to the question whether we can live forever would seem to be: Yes, we may be able to live for ever, but would we want to?