Caught by the horns

The closure of the Idgah abattoir gets under the skins of meat eaters in the Capital, who have turned into unwilling vegetarians 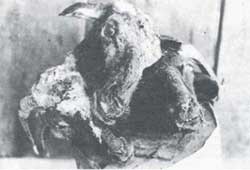 CAN India suddenly go vegetarian? Several animal rights activists have come forward with offers of alternative employment for the butchers who have lost their jobs as a result of the High Court order passing the closure of Delhi's Idgah slaughterhouse.

But will this sardonic professional rehabilitation solve anything? As long as there is a market for meat, there will be people to supply it. And this has been amply illustrated during the recent meat shortage that has resulted in illegal, putrid slaughterhouses cropping up in Delhi's backyards and across the state border. So, providing the butchers with other jobs will only make sense after people convert to pacifist vegetarianism en masse.
Such quaint and unrealistic views on the slaughterhouse issue only serve to divert our attention from the real concerns: which is to provide clean meat to citizens without causing needless suffering to the animals. Meat eaters have so far been exposed to as many as 213 animal diseases listed by the World Health Organization as dangerous to human health. This, of course, is discounting various other forms of stomach infections inevitable from eating meat from slaughterhouses infested by rats, cockroaches and maggots.

Delhi's Idgah slaughterhouse, for instance, has exceeded its daily capacity of slaughtering 560 animals by nearly 27 times; as much as 10,000 animals were being put to the cleaver every day till the Delhi High Court put an end to it on March 18 this year by restricting the killing to 2,500.

The filthy and agonising conditions under which the animals were being killed had repeatedly pointed out by the Central Pollution Control Board, the ministry of environment and forests and several social organisations. That the Municipal Corporation of Delhi (MCD) chose to totally ignore the warnings and allowed the slaughterhouse to deteriorate to its present condition is in itself appalling.

It has taken 2 High Court orders for MCD, entrusted with the health care of the citizens of Delhi, to try to rectify the situation. The first order, issued in October 1992 in response to a petition filed by Mohammed Iqbal Quereshi, ordered the closure of the Idgah abattoir by December 31, 1993. MCD blithely ignored the order, not even bothering to file a special leave petition. The second order in March, however, led to a shutdown, triggering an acute meat shortage in the Capital.

The 1990 Master Plan for Delhi had clearly stated that the slaughterhouse should be shifted out of the Capital by August 1993, which -- needless to say -- MCD ignored. The High Court order, one would have supposed, would bring the MCD to book. On the contrary, the order was challenged by no less than the Lt Governor of Delhi, leading to an ugly confrontation between him and the Delhi state government. While Lt Governor P K Dave argued that the butchers be allowed to slaughter 8,000 animals every day, Delhi chief minister Madan Lal Khurana insisted that MCD should stick to the 2,500 ceiling implemented by the High Court.
The issue is therefore no longer Idgah vs public health or Idgah vs animal rights. It has become Dave vs Khurana. Matters got worse when an obscure organization called the All India Babri Masjid Rebuilding Committee saw shades of communalism in the High Court order, claiming that it was a move against Muslims by the Delhi government led by the Bharatiya Janata Party. But the fact remains that the petition against the slaughterhouse was filed by Maneka Gandhi and not by the state government.

As the powers that be slug it out and the issue moves further and further away from a reasonable solution, Delhi's non-vegetarians have little choice but to patiently bear with the shortage and hope for clean meat in the future. The court order, however, has had some unlikely repercussions -- like carrion birds collecting around illegal slaughterhouses across the state border and disrupting aeroflights, and the Delhi government requesting the Haryana government to take measures to curb these illegal slaughters.

The one logical solution to the problem comes from N S Ramaswamy, former chairperson of the Animal Welfare Board. He suggests that urban abattoirs be shifted to wastelands in rural areas. This concept was, in fact, recommended by a 5-year-old report on the meat industry that proposed a phased programme of relocating abattoirs situated in cities over a 10-year period. Considering that meat forms only 15 to 20 per cent of the body weight of the animal, it is logical to transport only the meat to the city. Ramaswamy points out that the proposed abattoirs will eliminate cruelty to animals in transit, eliminate middlemen and ensure jobs to people where they need them. Carcass wastes and dung will also enrich the soil in wastelands.

It would a wasted sacrifice on part of Delhi's meat-eaters if the final outcome of the present controversy is based on extraneous considerations rather than the real issue of providing clean meat to citizens. Ideally, the present issue should be dealt with so as to serve as an example to the other abattoirs in the country operating under similar conditions.