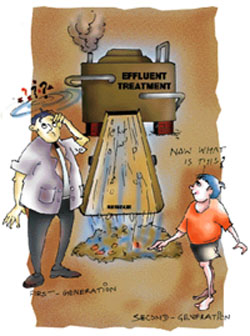 nobody can deny that damage caused by pollution is greater than the investment needed for setting up adequate pollution control measures. The data on pollution being generated is alarming. In Delhi, the industrial effluent load is 320 million litres per day (mld). Over 16 drains discharge about 1,900 mld of sewage water into the Yamuna. Of the total air pollution, over 25 per cent is generated by industries, and the other cities are no better. Both industrialised and developing countries spend a considerable percentage of their gross national product ( gnp ) on pollution control but the problem does not seem to be nearing a solution. So what can be done?

Pollution is an indicator of an inefficient process. It represents a wastage of world resources, an economic drain on a nation and a financial loss to an enterprise. If inefficiencies could be reduced, then pollution, too, could be controlled. The overall efficiency of energy use in most industrialised countries is 40 per cent. Over half the energy used is wasted and appears in one form or another as waste-heat that has an impact on the climate. As a result, industries are facing increasing opposition from the civil society.

A great deal of time and money is wasted in building effluent-treatment systems. In many cases, a change of process or raw materials would ensure the problem is overcome with minimum costs and without affecting the quality of the product. The traditional pollution control system solves no problem, it only complicates it. Take for example purifying wastewater. The process creates sludge, while burning chemical wastes creates particulate matter.

Thus, what emerges is an environmental paradox. It takes resources to remove pollution; pollution removal generates residues; it takes more resources to dispose of this residue and disposal of residue also produces pollution. The conventional controls methods are the so-called 'First-generation Pollution Problem'. They are enforced in the manufacturing process and regulated by legislation. The Air and Water (Prevention and Control of Pollution) Act in India and other such laws are an example. Lately, attention has been focused on so-called 'Second-generation Pollution' control methods that relate to product-use problems. The two types of pollution problems are interrelated, because, 'Second-generation pollution' potential in a product can become 'First generation' waste when the product is used.

Industries must look at expenditure in pollution control methods as any other investment. It takes 2-3 years for the plant to come on stream and start making returns. Any enterprise that implements pollution control technology will be in a position to sell this know-how as a specific commercial venture.

The cost of environmental conflict is difficult to quantify but for an enterprise, it carries a high price -- the risk of not only being banned from proceeding with new projects but of losing millions in legal costs. The structural dimensions of non-waste technology needs to be improved and should consist of a linking up of several different industrial, agricultural and urban activities in such a way that the waste of one becomes the input to another. Such a technology will rely on multiple use of resources and internal transfer of wastes from one sector to become the raw materials for another.

The objective should be set; first for the prevention of waste, then minimising that which cannot be prevented, and finally rendering harmless the waste ultimately released to the environment. It is true that end-of-pipe control options prevent pollution reaching the environment, but they are reactive and selective. Pollution prevention through cleaner production techniques is inherently safer, since polluting waste is eliminated at source.

The benefit of such a policy of pollution prevention is likely to be even greater in the Third World -- because the cost of pollution abatement will be cheaper as most of the industry is new and labour is cheap.

Prevention is cheaper as well as better than cure! n