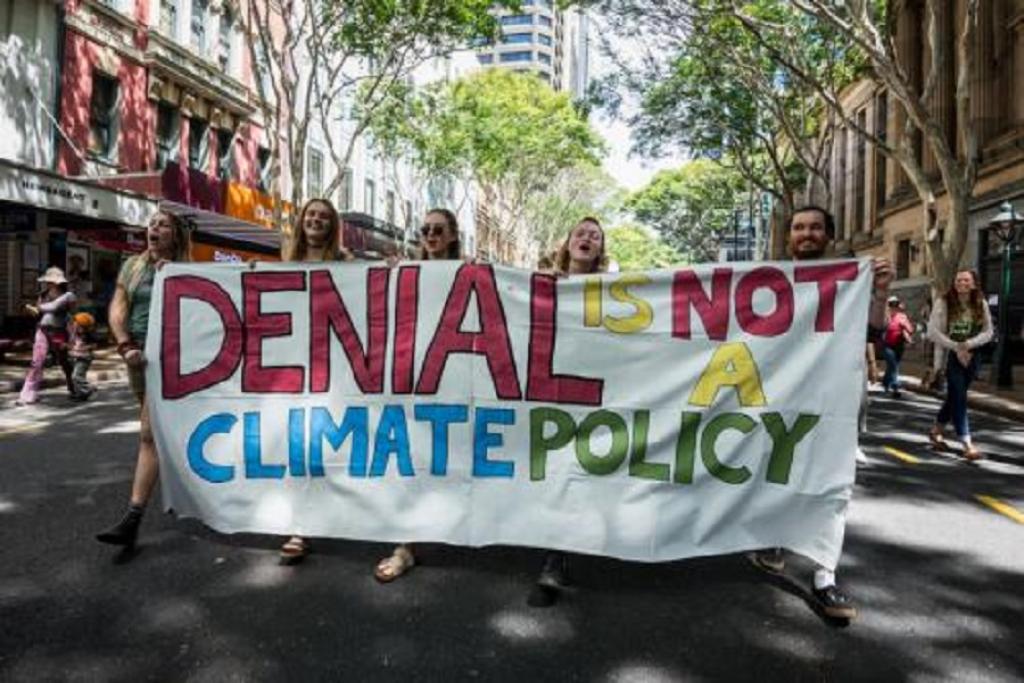 In a secret video recording made public in late June, a top ExxonMobil lobbyist — Keith McCoy, who was fired soon afterward — not only conceded that the oil giant’s support for a carbon tax is a sham, but he also admitted that the company quietly financed climate science denier groups to stave off government action and maximise its profits — a fact that my organisation, the Union of Concerned Scientists and others revealed more than a decade ago.

For all his candour, McCoy got at least one thing wrong. ExxonMobil did “join” — in other words, pay — denier groups to spread disinformation to blunt initial government attempts to curb carbon emissions. But McCoy inaccurately used the past tense. In fact, the company continues to fund them.

That videotaped interview caused some major heartburn for McCoy’s boss, ExxonMobil CEO Darren Woods, especially since the House Committee on Oversight and Reform has invited Woods — as well as top executives from the American Petroleum Institute, BP America, Chevron, Shell Oil and the US Chamber of Commerce — to testify at a hearing on October 28 on the “long-running, industry-wide campaign to spread disinformation about the role of fossil fuels in causing global warming.”

ExxonMobil has been at the heart of that campaign. Since 1998, the company has paid a network of seemingly independent think tanks and advocacy groups more than $39 million to manufacture doubt about climate science and stymie government action. Only Charles Koch and his late brother David, owners of the coal, oil and gas conglomerate Koch Industries, are known to have spent more.

That amount is down from the $790,000 the company reported it spent on nine climate science denier groups in 2019 and a fraction of what it spent in the past, but there’s a catch.

True, the company lost more than $22 billion in 2020 and cut back its grants across the board. But another factor for this decline is that ExxonMobil changed how it reports grants.

As first reported by Salon, the company only listed grants of $100,000 or more in its 2020 annual giving report. In previous years, it included grants of $5,000 or more. The change reduces transparency and ultimately means there is no way to tell how much the company spent in smaller donations to support climate disinformation in 2020 or compare the grants it made in 2020 with previous years.

Still, it’s worth taking a closer look at where the bulk of ExxonMobil’s self-reported climate disinformation budget did go in 2020.

The US Chamber of Commerce

Since 2014, ExxonMobil has given more than $5 million on top of its annual dues to the US Chamber of Commerce — a major player in blocking action on climate change for decades.

A few years after becoming an ExxonMobil grantee, the Chamber gained some unwanted notoriety by financing a widely debunked report that then-President Trump cited as a primary rationale for pulling the United States out of the Paris climate agreement.

In 2019, however, the Chamber appeared to flip 180 degrees, declaring on its website, “Our climate is changing and humans are contributing to these changes. Inaction is simply not an option.”

The assertion that human activity is merely contributing to climate change is inaccurate, given that burning fossil fuels is the primary cause, but the statement did represent a quantum leap from when the association spuriously maintained in comments submitted to the Environmental Protection Agency in 2009 that “a warming of even 3 [degrees Celsius] in the next 100 years would, on balance, be beneficial to humans.”

That said, the Chamber vowed in an August 24 press release to “do everything [it] can to prevent” the proposed $3.5 trillion reconciliation bill — which would slash carbon emissions from the electric power and transportation sectors — “from becoming law.”

And in a section on its website addressing climate change, the Chamber calls for “the increased use of natural gas” to make “further progress.”

Increase the use of natural gas?! That runs counter to what climate science says about the need to swiftly decarbonise the energy sector, essentially trading one major carbon pollution source — coal — for another — methane, which is 86 times more potent than carbon dioxide in warming the planet.

Moreover, according to a December 2019 study in the scientific journal Environmental Research Letters, the carbon dioxide emissions attributable to the boom in natural gas use over the last decade alone have now surpassed the emissions avoided by closing coal-fired power plants.

Economist Benjamin Zycher might be considered the climate science denier in residence at the American Enterprise Institute (AEI), which has received $4.86 million from ExxonMobil since 1998.

Zycher insists that a carbon tax would be “ineffective,” has called the Paris climate agreement an “absurdity,” and rejects the scientific consensus about the causes and seriousness of global warming.

Zycher published his most recent broadside against climate science in the Summer 2021 issue of National Affairs, a formerly independent conservative policy quarterly that AEI brought in-house in 2019.

In his essay, “The Case for Climate-Change Realism,” he falsely argued that the “available science” does not support the notion that human activity is “the single most significant cause of climate change” and the “available data” undercut the assessment that extreme weather events are “evidence of an ongoing climate crisis.”

As he has in previous articles, Zycher cited roundly debunked hypotheses for the primary causes of climate change, including a shift in northern Pacific Ocean circulation patterns called the Pacific Decadal Oscillation, which scientists have determined is incapable of causing a long-term warming trend, and “changes in solar activity,” when, in fact, the sun’s energy has declined since the 1980s while average global temperatures have continued to climb.

This summer was not a fortuitous time to be peddling discredited theories. On August 9, less than two months after Zycher posted his essay, the UN Intergovernmental Panel on Climate Change (IPCC) released a landmark, nearly 4,000-page “code red for humanity” report warning that the climate crisis is close to spiraling out of control and human activity is “unequivocally” to blame.

Zycher’s main objective? To make a case, no matter how specious, for continued reliance on fossil fuels, which he falsely claimed are less expensive than renewables. Proposals to cut carbon emissions, including the Paris agreement, would have little real impact, he argued, and could “be accomplished only by substituting expensive energy for cheaper energy.”

In fact, according to a recent analysis by Bloomberg, it is “now cheaper to build and operate new large-scale wind or solar plants in nearly half the world than it would be to run an existing coal or [natural] gas-fired power plant.”

To be sure, no one would confuse Zycher for a scientist or National Affairs for a peer-reviewed journal. But he serves ExxonMobil’s interests as a seemingly independent expert who continues to express doubt about climate science and the viability of renewable energy, thereby providing cover for climate science deniers in Congress.

The relatively unknown Regulatory Studies Center at George Washington (GW) University received $140,000 from ExxonMobil in 2020 and $1.2 million from the company since 2013.

Director Susan Dudley founded the centre in 2009 after serving as President George W. Bush’s “regulatory czar” at the Office of Management and Budget and, before that, running the Regulatory Studies Program at Koch-financed Mercatus Center at George Mason University.

She currently serves in various capacities for other longtime climate science disinformation groups, including the Koch-founded Cato Institute, the Federalist Society, and the US Chamber of Commerce.

The Regulatory Studies Center portrays itself as an “objective, unbiased” policy shop, but — like the Mercatus Center — its primary raison d’être is to weaken and quash government regulations, according to a 2019 analysis by the consumer advocacy organisation Public Citizen.

The GW center’s main tools are reports and public comments it submits to Congress, and although it does not get much mainstream news media attention, it has found a receptive audience on Capitol Hill — and in the previous administration.

Much of the Trump administration’s deregulatory agenda, Public Citizen found, echoed the center’s recommendations, including “dramatically reducing the cost that the government attributes to carbon emissions.”

But should the Regulatory Studies Center be lumped in with climate science disinformation groups? In response to the Public Citizen report, as well as criticism from UnKoch My Campus and GW student groups, the centre issued a statement in February disputing the charge that it rejects climate science.

“Contrary to unsubstantiated claims, no one in the Regulatory Studies Center questions climate science,” it said. “In fact, most of the Center’s scholars do not focus on environmental or energy issues at all. Those who have written on climate issues address economic and legal questions, not the science.”

Whether or not the centre directly disputes climate science is beside the point. In the face of incontrovertible scientific evidence, most ExxonMobil-funded disinformation groups have revised their position on the reality of climate change.

Instead of challenging the science, their efforts now tend to focus on denigrating renewable energy, overstating the costs of transitioning to a clean energy economy while ignoring the benefits, and preventing government action.

That is exactly what the Regulatory Studies Center does. In recent years, for example, it has published papers and filed public comments opposing stronger efficiency standards for home appliances and vehicles that would dramatically reduce carbon emissions.

The center also has enlisted the help of unabashed climate science deniers. In the fall of 2018, for example, it tapped Julian Morris to file a public comment supporting the Trump administration’s proposed rollback of Obama-era standards for cars and light trucks designed to increase fuel economy and, for the first time, substantially reduce tailpipe carbon emissions.

Morris, president and founder of the International Policy Network and vice president of research at the Reason Foundation — two libertarian, climate science denier organisations — falsely declared in a paper published in March 2018 that the “effects of climate change are unknown — but the benefits may well be greater than the costs for the foreseeable future.”

The money ExxonMobil donated in 2020 to AEI, the GW Regulatory Studies Center and the US Chamber of Commerce represents only a small percentage of the company’s recent outlays to sway public opinion and blunt government climate action. It is difficult to document all of the company’s related expenditures, but they include:

So while ExxonMobil CEO Darren Woods and his colleagues proclaim that they fully understand the threat posed by climate change and are “committed to being part of the solution,” the evidence shows they continue to spend tens of millions of dollars every year to promote gridlock in Congress on the issue.

The future of the planet as we know it hangs in the balance, but as McCoy acknowledged in his interview, ExxonMobil was — and still is — looking out for its investments and its shareholders’ short-term interests, regardless of the long-term consequences.

This article was produced by Earth | Food | Life, a project of the Independent Media Institute

Elliott Negin is a senior writer at the Union of Concerned Scientists in Washington, DC