The draft of a new European Union (EU) climate law  set the unambitious target of the EU attaining net-zero greenhouse gas emissions by 2050. The draft was published by the European Commission (EC) on March 4, 2020.

The draft law’s explanatory memorandum said the targets were consistent with “scientific findings reported by the Intergovernmental Panel on Climate Change (IPCC)”.

While the IPCC had set global goals of attaining net-zero emissions by 2050 to limit the mean temperature rise to 1.5°C, country-wise targets were outside its remit. These are subject to principles of equity and Common But Differentiated Responsibilities and Respective Capabilities (CBDR-RC), which are enshrined in the 1992 United Nations Framework Convention on Climate Change and the 2015 Paris Agreement.

While visions of what constitutes CBDR-RC are necessarily subjective, the highest level of ambition in target setting is necessary, given that a 2050 global net zero only ensures a 66 per cent chance of limiting warming to 1.5°C.

Unpredictable regional and global climatic “tipping points”; so called points of no return, could be reached at much lower levels of emission.

A range visions of what constituted a country’s fair share — based on 40 studies referred to by the IPCC — was presented by the Climate Action Tracker (CAT).

According to the science, deep cuts are required within the next decade. However, the draft proposes to increase the EU’s current Paris Agreement target (40 per cent cut in emissions over 1990 levels by 2030) to a mere 50 per cent.

Even this would only be adopted after discussions on an EC report which is due to be published in September 2020.

As for the 55 per cent target, the September 2020 report will merely go into the question of whether the same is possible “in a responsible way”.

It may be recalled that the European Parliament had proposed the 55 per cent target while declaring a ‘climate emergency’ during the United Nations Climate Change Conference in December 2019.

Even a 55 per cent emissions cut by 2030 would not be enough to bring the EU to a Paris Agreement compatible pathway, according to the CAT.

The new law is not so much about climate targets, especially not about the 2030 targets which the science said were absolutely crucial.

Indeed, as German politician and EC President Ursula von der Leyen said, the law was intended to provide the tools to “draw the path” from “2030 to 2050” after finishing a “very detailed impact assessment”.

The specific time-frame assumes significance, considering the EU is widely off-track to meet the current Paris target of 40 per cent emissions cut by 2030.

It is only on track to a 30 per cent emissions reduction, according to a major report from the European Environment Agency.

The brouhaha over the 2050 target thus merely kicks the can down the road.

Much of the European public would support a higher level of ambition. The new law proposes public participation, to be carried out largely through the working of the European Climate Pact.

But on the lines of the UK Citizen’s Assembly opened by David Attenborough in January, the mandate of such consultation is merely a discussion on how to achieve the 2050 net-zero target, rather than what that target should be.

The law would empower the EC to set out a trajectory to 2050, with a stipulation that the same be reviewed within six months of each global stock-take under the Paris Agreement. The next stock-take would be due in 2023.

While setting out the trajectory, the commission said it would consider cost effectiveness, economic competiveness of the trade bloc, energy affordability, security of energy supply and investment needs.

To these mundane considerations — central to a trade bloc’s work — but not at all befitting declarations of climate emergency, the draft law admirably added “the need to ensure a just and socially fair transition” as well as “fairness and solidarity between and within member states”.

This emphasis on solidarity and just transition does not extend to outside Europe’s borders, as attested by the unambitious 2050 net-zero target.

As the explanatory memorandum noted, the EU cannot tackle climate change without action by others.

But having been responsible for over 22 per cent of global emissions since the dawn of the industrial civilisation — with just 6.8 per cent of the population — the continent’s solidarity must begin with the EU doing its fair share. 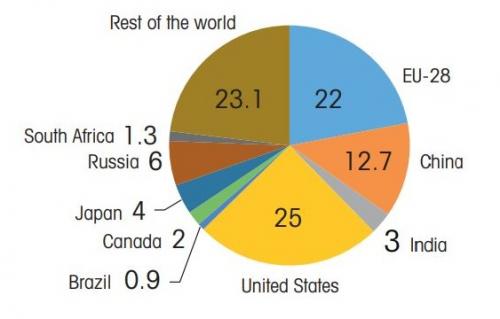 Source: Our World in Data

Nevertheless, the merits of the law beyond the laughably unambitious 2050 net-zero target require examination.

This is the first in a two-part series. Watch this space for the second part of this story which will explore whether the new EU climate law provides a framework adequate to ensure climate targets are met.