Climate emergency: A question of semantics?

The letter reveals that Down To Earth (DTE)’s “single blog post” was the only material evidence in the dossier used to justify her sacking. More importantly, the letter also contains the UK’s seven-point CoP 26 Glasgow Action Plan, about which DTE produced an 1,866 word-analysis (excluding block-quoted texts) of which, 1,503 words directly addressed each point. Sorry editors!

The Guardian, on the other hand, produced an 841-word piece, with 255 words directly addressing the seven points. The remaining 586 were devoted to crucial policy detail such as a female politician’s “previous married name” as well as her past references to certain intimate acts.

Such is the reality of a leading media house in a developed economy. Much of its £224 million revenue is invested in what it calls ‘climate emergency’; with The Guardian making much of calling it a climate emergency rather than refer to climate change as most scientists prefer.

But the goal of engendering panic, which is central to framing the issue as an emergency, prevents deeper analysis of complex issues. Such analysis is necessary to combat just the kind climate misinformation which The Guardian claims is rife, in its donation pleas.

Last year, a Guardian infographic screamed “Is your country’s climate pledge consistent with keeping global heating under 1.5°C?” Bizarrely, given its investment in the climate emergency, the answer it gave to its readership (whether they defined themselves as British or European) was surprisingly not an action-engendering “No” but a complacency-inducing “Yes”. 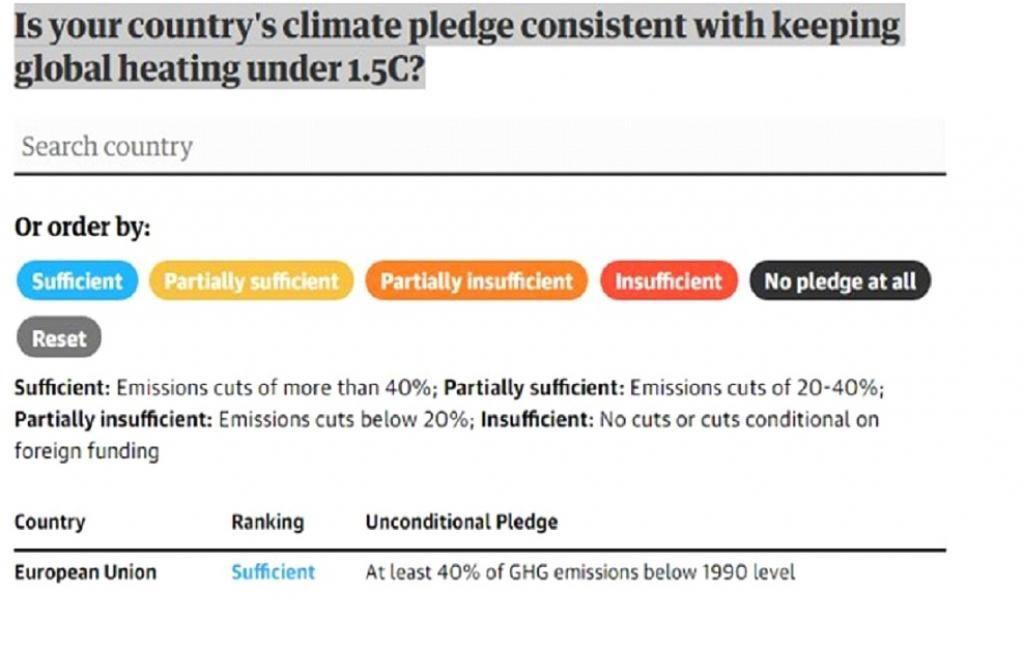 A screen grab of The Guardian piece

This was because it was based on The Truth Behind the Climate Pledges, an obscure report which argued that the European Union (EU) and six other European countries were the only ones in the whole world whose climate pledges were adequate. This startling conclusion was borne of its abandonment of the principle of Common But Differentiated Responsibilities and Respective Capabilities (CBDR-RC), enshrined in every single climate agreement.

The report’s admission of this fact enabled DTE to produce a critique on the very day it was published. The Guardian merely reported the study’s conclusions.

Let us overlook the key questions of capability and historical responsibility, which we analysed in our critique of the report as well as of the The Guardian infographic. If all countries were to take on a one-size-fits-all 40 per cent emissions cut over 1990 levels by 2030 as the report requires, what would per capita emissions in 2030 look like?

Thus, India will have no carbon space to meet the subsistence needs of its teeming poor, while Europe will continue to maintain first world levels of carbon-intensive consumption.

This is the dystopia inherent in the report. The infographic was shared on Facebook by no less the than the world-leading Tyndall Centre for Climate Change Research at the University of East Anglia, which houses Intergovernmental Panel for Climate Change (IPCC) luminaries.

One is thankful that setting country-wise targets is explicitly beyond the IPCC’s remit, because that question is clearly beyond the ken of science alone.

The Guardian, which has actively shaped its coverage of climate change to achieve policy change by adopting an official policy on semantics, would do well to adopt a world-leading policy on sensitivity to equity. 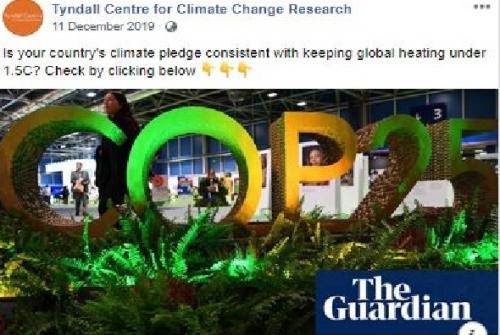 There are many analyses for equity, such as the Climate Action Tracker (CAT), whose work is regularly cited by the BBC, which is hardly known for being an anti-establishment climate justice warrior.

A collaborative effort between the New Climate Institute and Climate Analytics, both based in Germany, CAT not only provides quick-and-dirty ratings but also in-depth analysis of data and policy, sometimes updated within minutes of policy announcements. 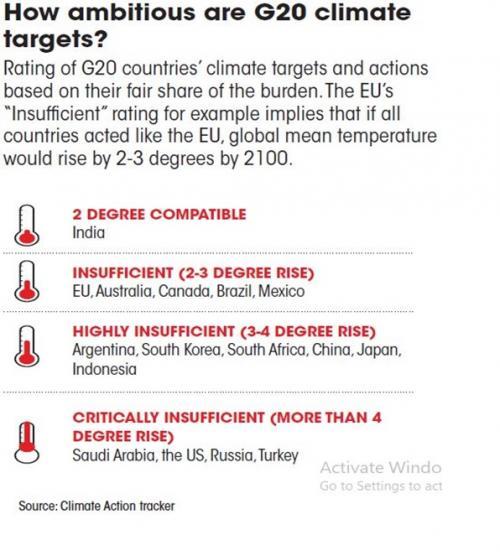 The draconian world of the infographic fits into a pattern of insensitivity to equity. The Guardian regularly presents infographics exclusively for gross national emissions, pushing the narrative that an Indian’s contribution to climate change is comparable to an American’s though the latter’s annual emissions are eight times as high.

This is despite most serious reports also presenting not only per capita data, but also consumption-based data. This includes emissions from imports, which are particularly significant for the UK, the most de-industrialised large Organisation for Economic Cooperation and Development economy.

Imports add 40 per cent to the UK’s domestic carbon footprint; indeed the British Office of National Statistics has argued that if imports are accounted for, the UK’s decarbonisation challenges the infamous Kuznets curve. Not for nothing did Greta Thunberg accuse rich countries of “creative carbon accounting”.

This insensitivity also strongly influenced coverage of CoP diplomacy during Madrid in 2019. Thus, one piece mentioned something called a “High Ambition Coalition” which included the EU. India (described as a “richer nation”) was cast as the villain of the piece. Irony just died a thousand deaths.

Moreover, The Guardian has failed to emphasise that developed countries were not even close to meeting their targets for climate finance to developing countries. When forced to address the issue by the Financial Times letter, the paper merely noted that there are “conflicting views on how to count the cash”.

But there is not a single report which says this target is close to being met. Given that mitigation alone costs the developing world $600 billion annually and we are talking of $100 billion in finance in the rare event the target is met, The Guardian’s failure is stark. Finance targets are also key Paris targets and this is forgotten too often.

Despite reporting many climate change stories from Denmark over the years, the newspaper failed to cover its recent potentially world-leading climate law which commits the country to fulfilling its international obligations including in relation to finance for developing countries.

Emergency is an unhelpful way of framing the climate crisis

To Indians, the word ‘emergency’ suggests a time when draconian things, including mass imprisonment and mass sterilisation were justified in the name of the greater common good, with little deliberation or debate. Framing something as an emergency leads to the politician’s syllogism: “We must do something. This is something. Lets do it”.

The climate emergency is a useful shift in semantics for defeating organised climate skeptics. But given that the most conservative British government in a generation passed a net-zero law last year, however inadeuqate, climate skepticism may not be the country’s most pressing problem.

Indeed, over a quarter century has passed since every country in the world formalised its intent on climate change by giving assent to the UNFCCC at Rio de Janeiro in 1992. Climate skepticism no longer assumes the gargantuan proportions it did, though its existence in places like the White House must be extinguished.

But there is disagreement as to the extent to which efforts must be made to combat climate change, as well as the best strategy to do so. Even the IPCC’s gold-standard reports study multiple sociotechnical-economic pathways for the world as a whole which can lead to the end goal of limiting warming to 1.5°C or 2°C.

The division of that global mitigation burden between countries is the subject of climate negotiations, which are to be ostensibly guided by CBDR-RC. Strategies to achieve the resulting national target is the subject of multiple studies with often radically different solutions.

Thus, whatever the certainties of the science of climate change, the practice of climate change mitigation is contested and uncertain; lying as it does on the interface of science, technology, economics, sociology, political science, diplomacy and public policy.

The media needs to play a key role in facilitating this debate and discussion between a wide range of experts as well as common citizens drawn from across the world. For an optimal solution, it is crucial that voices from every corner of the world be heard on hegemonic global platforms.

This year, the first rate British media must play a leading role. Given the present turmoil in British politics that has directly shattered the global climate order, it is essential that political journalists get involved. Given Britain’s role in guiding negotiations, it is also crucial that diplomatic journalists be involved. But given Brexit, both these are in short supply.

The environmental desk must go beyond the emergency syndrome to produce a richer and more nuanced picture of the devastating impact that climate change is set to have. Consider a rich and exciting paper about the complexities of regional and global tipping points.

Reporting of the same must use the phrase “tipping points” more than once, rather than focusing entirely on some playful analysis at the very end of the paper; analysis which is standard in risk-management techniques. But that may not make for an exciting headline involving climate, the Titanic and a “mathematical iceberg”.

DTE understands the temptations of click-bait. But the planet demands better of all of us.