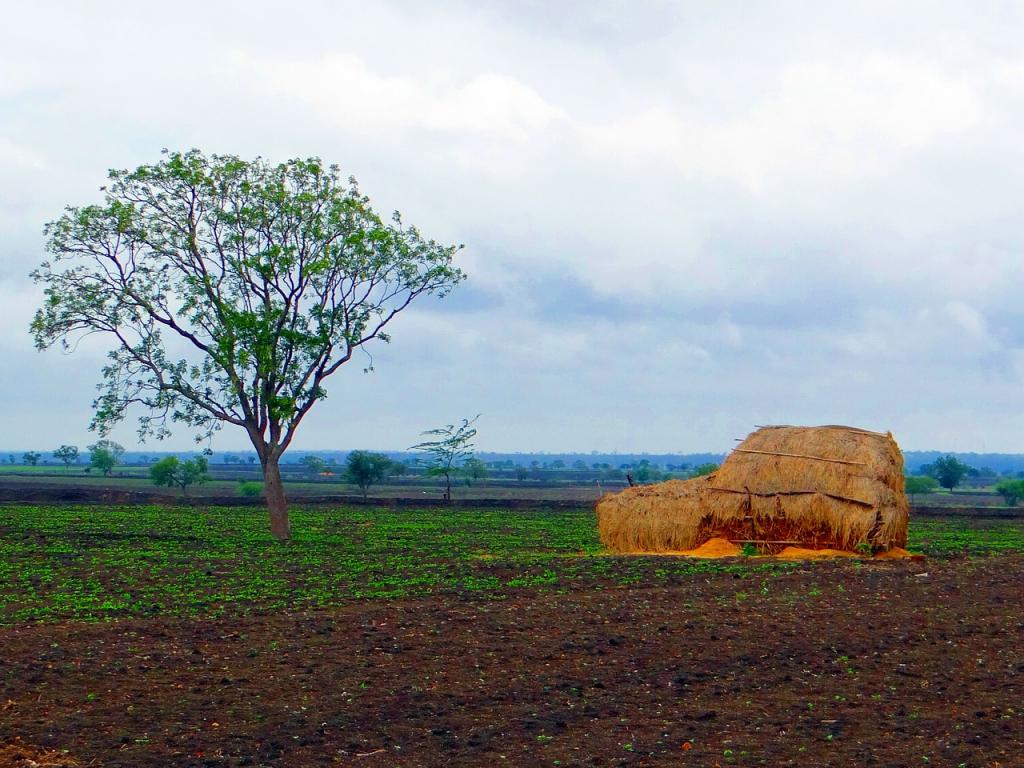 “Food insecurity has led to immeasurable suffering during the course of human history and, even in recent years, has been at the root of political revolutions and social upheavals,” stated the report Common Ground: Restoring Land Health for Sustainable Agriculture released recently by the International Union for the Conservation of Nature (IUCN).

Achieving food security is a major priority of every responsible government and most have attained it in recent decades. The agricultural sector has significantly increased productivity and reduced the number of food insecure people — but with high costs to nature.

The runaway intensification of monoculture-based agriculture has led to the transgression of ecological boundaries.

The lead actors in the Anthropocene have manipulated the world at a planetary scale; agriculture is one of the major threats to planetary boundaries. It a source of risk to biosphere integrity, biogeochemical flows, land-system change and freshwater use. It is also a major contributor to climate change.

Additionally, degraded soils and ecosystems, depleted water sources and reduced biodiversity as well as 23 per cent of anthropogenic greenhouse gas (GHG) emissions are a result of agriculture, forestry and other land use.

Land is a finite resource. What does it take to feed nearly eight billion people and mitigate climate change by reducing GHG emissions at the same time? What is the common ground to manage nature, increase agricultural yield, while meeting the Sustainable Development Goal (SDG) 2 of ‘Zero Hunger’?

The answer is a mix of partnerships. A common ground lies in building consensus on environmental stewardship in the agriculture sector across two scales:

Soil needs to be considered as an ecological system and a finite resource. Conservation of soil biodiversity and soil organic carbon (SOC) through sustainable farming practices should be deemed essential to improve upon agricultural land health and productivity.

Improved soil biodiversity is closely correlated with an increase in carbon stored in soil, for it sequesters organic carbon and is a natural carbon sink. It is, therefore, imperative in reducing GHG emissions.

The global carbon (C) cycle includes a significant C stock in terrestrial soils, including agricultural soils. Global land and soil degradation is strongly linked to the depletion of this stock.

The global production of three of the most important food crops — maize, wheat and rice — could increase by up to 23.4 per cent, 22.9 per cent and 41.9 per cent respectively between 2020 and 2050, if organic carbon in all the world’s agricultural soils were to increase by 0.4 per cent annually.

Additionally, hydrological cycles also benefit from increased soil carbon. The capacity of soils to store water could increase by up to 37 billion cubic metre. The increase in soil moisture from 4‰ (parts per thousand) has the potential to reduce reliance on irrigation, with estimated global savings of $44 billion per year.

The benefits of 0.4 per cent could result in increased resilience for vulnerable farming communities, and reduced exposure to projected risks associated with climate change such as floods, droughts and storms. This is due to enhanced soil biodiversity. 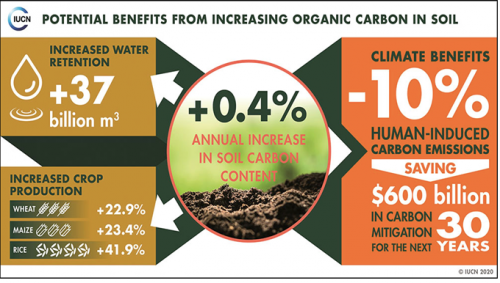 The C sequestration potential in cropland is about two times higher than in managed pastureland, even though the global surface is less than half. Achieving the goals of 0.4 per cent on improved SOC could capture approximately 1 gigatonne of carbon per year over the next 30 years — equivalent to 10 per cent of global anthropogenic emissions.

It would also help avoid social costs equivalent to $600 billion per year through climate change mitigation during 2020-2050. All natural disasters in 2017 globally cost $340 billion. The 0.4 per cent increase in soil productivity has an estimated value of $135.2 billion per year, the IUCN report stated.

The potential productivity increases differ by region, but could be the highest in developing countries, help increase food security, reduce the need for inorganic fertilisers and offset the demand for further conversion of natural habitats for agriculture.

A developing country such as India that produces almost 16 per cent of its GDP from agriculture (in 2019) would greatly benefit. Achieving the goal of 0.4 per cent soil productivity would increase the resilience of farming communities in the face of climate change, reduce reliance on inorganic fertilisers and offset the demand for further land conversion and combat climate change.

The IUCN report summed it up:

When farmers work the land sustainably, they do not just feed us; they transform agriculture into a genuine nature-based solution to our most pressing societal challenges, contributing to regulating the climate, enhancing water security and providing habitats to countless species.

It is hoped that future policy will support the farming and conservation community to work together in feeding the world whilst at the same time promoting sustainable, viable and applicable agroecological practices towards sequestering carbon and conserving the rich diversity of life on the planet.