A draft of the European Union (EU)’s Biodiversity Strategy for 2030 compounds the mistakes of its framework policy — the EU Green Deal — as well as the global push for ‘nature-based solutions’ to climate change.

The Green Deal needed to lay out an ambitious Green House Gas (GHG) emissions reductions target, but failed to do so. The Biodiversity Strategy is now being used to make up for the shortfall, by playing up the potential for land, vegetation and forests to sequester or capture carbon from the atmosphere. 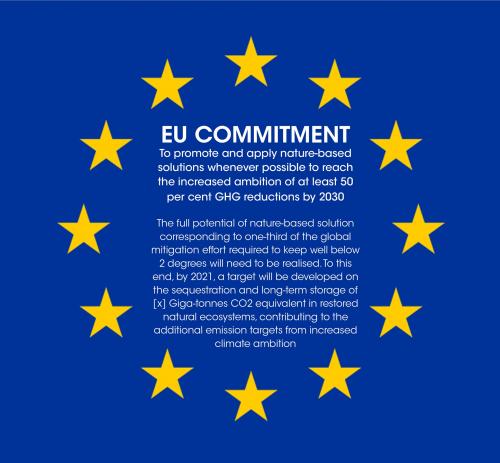 The Intergovernmental Panel on Climate Change (IPCC)’s Special Report on 1.5 degrees Celsius made clear that the world must reach net zero emissions by 2050. This means that historically large climate polluters, such as the EU, must aim for net zero much earlier, ideally by 2030. So, the basis on which this biodiversity strategy is built — a 50 per cent reduction by 2030 — is flawed.

Nobody denies that enhancing soil carbon, and vegetation and tree cover will be part of a responsible climate policy. But those huge ranges of mitigation / sequestration potential underscore the problem with relying heavily on nature-based solutions.

The statement that the “full potential of nature-based solution” corresponds to one third of the global mitigation effort is not serious. The danger is that over-estimating the potential of such solutions allows governments to get away with less ambitious emissions reduction. The undefined “[x]” in the above extract will tell us how sincere the EU is about mitigation.

Since the policy is broadly one to enhance biodiversity, the expectation is that it will balance climate considerations with that broader aim. The ‘nature-based solutions’ emphasis, however, risks upsetting this balance. Encouraging such solutions with policy and finance can lead to monocultures, which are bad for biological diversity, and long-term carbon sequestration. It can also lead to trampling on local community rights.

None of these are insoluble problems. However, policy documents such as this latest draft from the EU create a momentum behind certain kinds of solutions at the cost of others. They are also open to interpretation by bureaucrats and the private sector, who may or may not keep the broader purpose of the policy in mind.

The EU can address this by making the need for limits and safeguards clear, even in this framework document. The alternative is a legitimisation of green-washing, with no structural change.