How to beat Trump on climate change?

It looks like the US will not withdraw from the UN Climate Convention or the Paris Agreement. It would keep the seat and undermine the progress made so far. We have to counter this 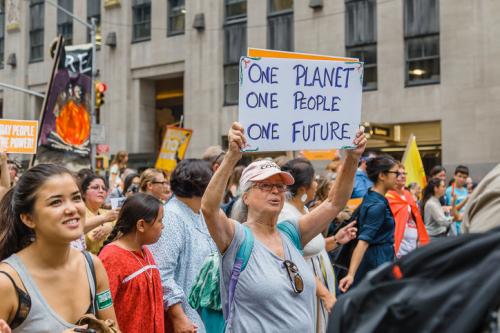 UPDATE: Trump's recent executive order reversed the progress the US made on climate under Obama by lifting the ban on federal leasing for coal production and restrictions on production of oil, natural gas, clean coal and shale energy. How can we counter Trump? In this article published on February 4, 2017, Chandra Bhushan, an expert on climate politics, suggested an out-of-the-box approach: move emissions cut negotiations out of the UNFCCC to smaller negotiating tables.

One of the good things about the American democracy is that public can witness and participate in the senate hearings that confirm appointments of key functionaries in a new administration. Anyone can watch these hearings live or stream them online.

I know fully well that US President Donald Trump is an avowed climate change denier. Still, I am inquisitive about the people he is hiring in positions where they will call the shots on climate change. I, therefore, watched the hearing of Rex Tillerson, the Secretary of State who will be the boss of the climate change negotiation team. I also saw the hearing of Scott Pruitt, the nominee to head the Environment Protection Agency (USEPA). If confirmed, he will decide the fate of Obama’s Clean Power Plan and other regulations to cut the emissions of greenhouse gases. I listened to what Rick Perry, nominee to head the Department of Energy, had to say about energy choices for Americans and climate change.

Tillerson: as slick as oil

Let me start with Tillerson. He is as slick as oil on climate issues. He believes climate is changing, that it is a risk and action should be taken. But he says it is difficult to predict its impacts, that further research is required to assess risks and there is a wide disagreement on the action to be taken. By accepting climate change is real, yet being indecisive on how to act on it, he has shelved climate action in one stroke.

My conclusion is that we are dealing with a person who would say right (and convoluted) words on climate change, but would not do anything to advance climate actions in the US. Under him the US is likely to renege on all its (modest) pledges on climate change. As CEO of Exxon Mobile this is exactly what he had done. Exxon accepts that climate change is a risk but dismisses the need to reduce the use of oil, gas and coal.

A gang of deniers

Scott Pruitt believes that the climate is changing and human activities contribute to it in “some manner”. He, however, thinks the ability to measure this impact with precision is debatable, and so is the action to be taken. He refused to comment on shifting the energy pattern in the US away from fossil fuels. Pruitt comes across as a classic climate change denier, and we should not expect the US Environment Protection Agency (EPA) to do much on controlling CO2 emissions. In fact, he is a right candidate to repeal the Clean Power Plan.

Rick Perry said the same things as Pruitt but in a different manner. He said that the climate is changing, partly because of natural factors and partly because of humans. Instead of addressing whether the US should move away from fossil fuels, he went into the issue of economic growth and energy affordability. Perry has, in the past, called climate change a hoax and I think he still believes the same.

So how do we deal with such a regressive US administration? Let’s start with what I think would be the modus operandi of Trump to disengage the US from the Paris climate agreement.

The first thing that Trump would do is to cut international funding on climate change. There is already a bill in the US Congress titled “No Tax Dollars for the United Nations' Climate Agenda Act”. Sponsored by Republican congressmen, this bill “prohibits United States contributions to the Intergovernmental Panel on Climate Change (IPCC), the United Nations Framework Convention on Climate Change (UNFCCC), and the Green Climate Fund (GCF)”.

The second thing that Trump would do is to undermine Obama’s Clean Power Plan. This plan is the key for meeting the modest emissions cut target US has pledged under the Paris Agreement. Weakening of the plan, along with encouragement to coal, oil and shale gas, would translate into US not reducing emissions.  Inaction in the US—the largest emitter of greenhouse gases historically—would undermine UNFCCC’s effort to enhance emission cut pledges of other countries when they submit final Nationally Determined Contributions by 2020.

The final thing that this administration would do is to keep the seat at the table and obstruct negotiations. From 2018 to 2020, UNFCCC’s focus will be to raise countries’ ambition to cut emissions and put more money on the table. As Trump is not going to pay a single dollar to international climate finance and is also not going to cut emissions, there is nothing that his negotiators can do other than undermine the UN climate agreement process and its outcomes.

So, let me stick my neck out and say that the US will not withdraw from the UN Climate Convention or the Paris Agreement. It would keep the seat and undermine the progress made so far. Then how does one counter this modus operandi?

The art of war

Firstly, US academia and non-profits will have to change their rules of engagement at the UNFCCC. Till date, most of them have supported their governments—Republican or Democrat—with a hope that they would be able to nudge Washington to do more. But that’s not going to happen with this administration. US academia and non-profits must work in coordination with its media to continually expose Trump’s regressive domestic and international climate policy. They must act as a watchdog and keep Trump administration under pressure at all times. If they do this, I am sure they would get the support from the civil society across the world.

Secondly, countries must adopt a policy of “isolating and shaming” the US. If the US refuses to contribute to international climate finance, other countries, including developing countries like India, should come forward and contribute. If the US refuses to adhere to its commitments, then countries should not give it any position on the high table. For instance, they should not ask Trump’s nominee to chair any committee, meeting or institution. They must make the US a pariah state at the international climate negotiations.

Lastly but most importantly, countries should start moving substantive emissions cut negotiations out of the UNFCCC to smaller negotiating tables. Let me explain: we all know that the Paris Agreement is not sufficient to keep the world safe. Far higher emission cuts would be required so that the global temperature does not rise by more than two degree Celsius. But as I explained above, the belligerent Trump will not allow more emission cuts. He would dampen the ambition of other countries as well. Considering this new reality as well as the protractive nature of negotiations at UNFCCC, we should try and move towards “sectoral” negotiations. The successful negotiations at Kigali last year to amendment Montreal Protocol to phasedownsuper greenhouse gases called HFCs shows the advantages of smaller sectoral negotiations in achieving ambitious outcomes.

Already, negotiations are taking place under the International Civil Aviation Organisation and the International Maritime Organisation to cut emissions from aviation and ships, respectively. We need to put more emphasis on these sectoral negotiations and create more such forums for industry, forestry, energy and other sectors. Multilateral institutions like FAO, UNIDO,UNEP can be suitably strengthened to convene these negotiations. UNFCCC could still remain the primary body to discuss the “big picture”, but decisions to cut emissions and discuss technology and finance should move to specialised sectoral negotiations. I believe this is the only way to solve climate change and counter Trump and Trumpism.

In warfare, there is a principle called “division”. It is used when you are confronting a stronger force. Large, coordinated forces are difficult to defeat. But when you divide the enemy into small units you can defeat each one with relative ease. If we want to defeat Trump, we will have to fight him at multiple platforms, and deny him one large, coordinated platform like UNFCCC. As Sun Tzu, the great Chinese general andauthor of The Art of War, said, “If you know the enemy and know yourself, you need not fear the result of a hundred battles”. We need not fear multiple negotiating platforms because we all know that it is our only chance to save the planet.