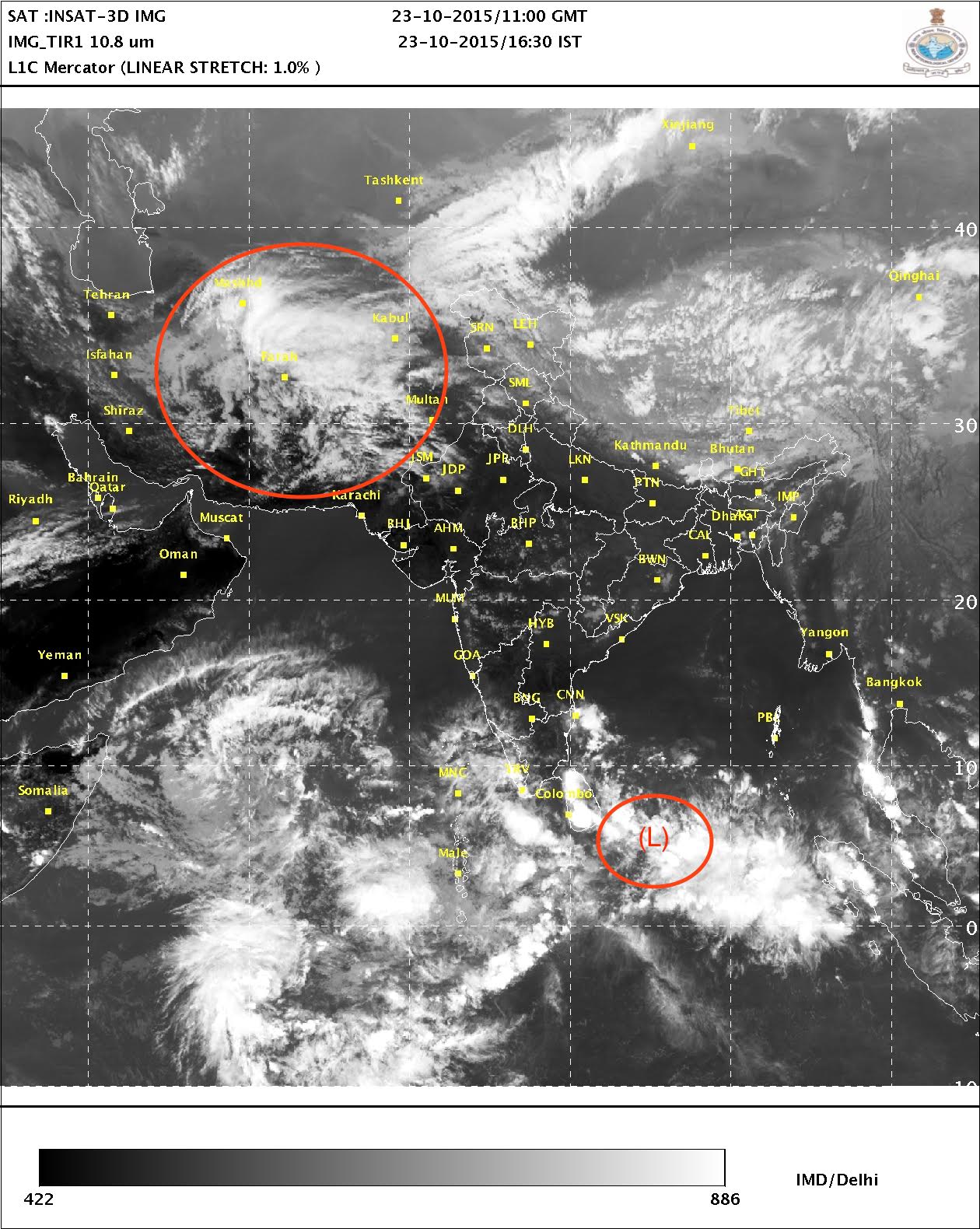 A powerful upper air trough (popularly called western disturbance by the India Meteorological Department) is all set to hit northern India by this weekend.

As a result of it, the hilly areas of Jammu and Kashmir, Himachal Pradesh and Uttarakhand will receive snowfall from Saturday (October 24) till Wednesday (October 28).

The maximum amount of rainfall (to be witnessed in the low-altitude areas of these three states) and snowfall will be witnessed from Saturday to Monday. During this period, landslides will be witnessed on the Jammu-Srinagar highway, which will likely to remain shut for a few days.

Temperatures in much of the Kashmir Valley (including Srinagar) are already above the freezing point. Hence, the expected rainfall may create water logging and flooding. Travellers should remain cautious.

Along with rainfall and snowfall, thundershowers are also expected in Punjab, Chandigarh, parts of Haryana, Delhi and the National Capital Region from Sunday to Tuesday.

Winter has gradually started arriving in the hilly areas of north India. From Saturday onwards, maximum temperatures will decrease by an average 2-3° Celsius in Jammu and Kashmir, Himachal Pradesh, Punjab, Haryana and Chandigarh due to rainfall.

Other places such as Gulmarg (J&K) recorded a minimum temperature of -1.4°Celsius (3° Celsius below normal), Srinagar recorded 5.5° Celsius, Pahalgam and Keylong (Himachal Pradesh) recorded 0.6° Celsius and Manali stood at 4.6° Celsius.

However, south tells a different story. If one travels a bit southwards, a contrast in the weather will be observed.

The maximum temperatures in the past 15 days have been consistently in the range of 35-40°Celsius in states such as Maharashtra, parts of Karnataka, Telangana and Andhra Pradesh.

In western India, a few places in the Kutch area of Gujarat recorded maximum temperatures above 40°Celsius.

Mumbai is also “boiling” as was expected (read https://www.downtoearth.org.in/blog/tropical-depression-forms-in-the-arabian-sea-51447).

On October 16, a 43-year-old record was broken in Mumbai. The day was the hottest in October in Santa Cruz area. On this day, the maximum temperature stood at 38.6°Celsius, which was 5.2°C above normal. Earlier, 37.9°Celsius was recorded on October 23, 1972.

Such high temperatures are affecting Maharashtra’s agriculture. The state’s water stock is at its lowest in the past five years due to poor monsoon this year.

The temperature contrast between north and south India is a typical feature the country witnesses every year in October after the south-west monsoon withdraws.

This year, the south-west monsoon withdrew from entire India on October 19, as per the IMD. Dry, northerly winds in north India are keeping the skies clear. This, in turn, is causing radiative cooling (a process in which heat from the Earth’s surface is radiated back to the space). Central and western India witness high temperatures in October due to the prevalence of dry winds. The lack of any rain-bearing system during this period is also responsible for this situation. But, this time the duration of such high temperatures is more than normal.

Strong low-pressure system possible in the Bay of Bengal

Weather models suggest intensification of this system in the Bay of Bengal early next week. If we believe in the present forecast, the system will reach near the Tamil Nadu coast by Wednesday. It may bring heavy rainfall in the coastal areas of Tamil Nadu and Andhra Pradesh. With this, the much awaited north-east monsoon is anticipated to commence in southern India.

Also, we cannot rule out the possibility of the low pressure intensifying into a tropical depression or even a tropical storm. Hence, it will be monitored closely and an update will be given, if at all, it poses any significant risk for the south-east coastal areas of India.