The central government informed Parliament in December 2018 that sea levels along the Indian coast are projected to rise from 3.5 inches to as much as 34 inches by the end of the century due to global warming 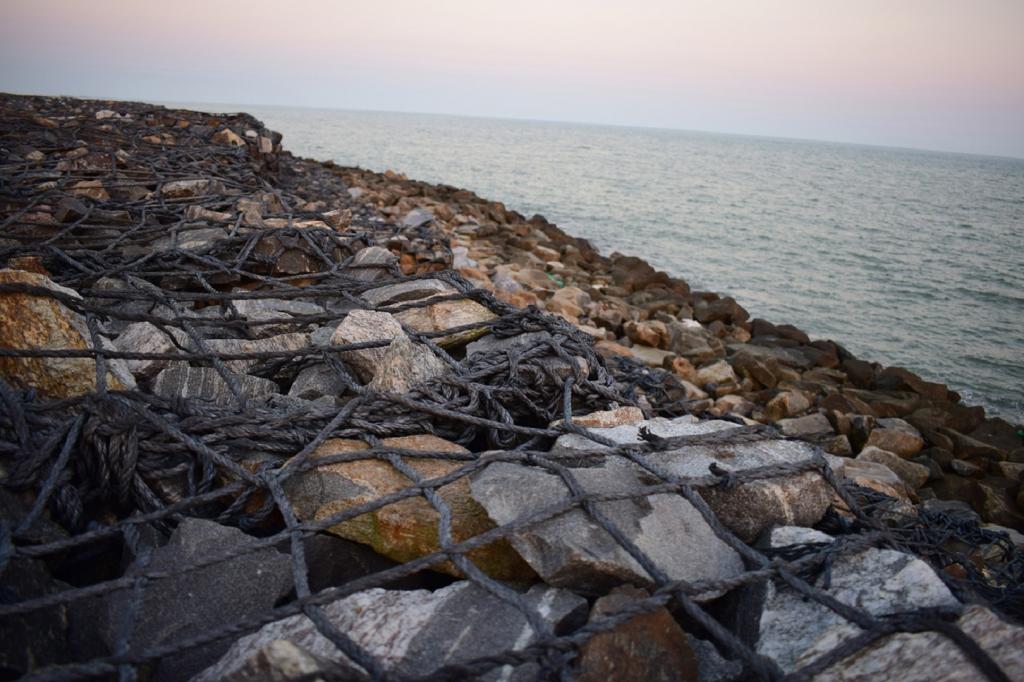 From a distance, Udayakani village in eastern India’s Puri district looks picture perfect, full of shade trees, tidy homes, and, for now, a vast beach. But this coastal village is bearing the brunt of sea-level rise and residents are demanding that something be done.

“We have moved inwards thrice because the sea is moving forward taking away our land. It has heaped insurmountable sorrow on us,” Gobinda Pradhan, the 75-year-old ward member of the village, said.

According to a 2014 study on regional coastal processes by the Integrated Coastal Zone Management Project (ICZMP), a World Bank-supported initiative, around 10 per cent of Odisha’s coastline — mainly stretches in Puri, Kendrapara and Ganjam districts — is highly vulnerable to sea erosion.

The frequency and magnitude of erosion in these areas has also increased in recent years, the study shows. That is due in part to cyclones and flooding occurring more often and with greater force in coastal areas, as well as infrastructure development, which has happened more quickly in coastal Odisha than other, less populated parts of the state.

“Construction and embankment activities at Paradip Port and other places in Jagatsinghpur district have an impact on Satabhaya and Pentha in Kendrapara district,” Ranjan Panda, convener of water rights non-profit Water Initiatives Odisha, said referring to two villages that have been inundated with sea water.

Odisha lost 153.8 kilometres, or 28 per cent, of its 485-km-long coastline between 1999 and 2016 to sea water ingression, according to a July 2018 study by the National Centre for Coastal Research in Chennai. The study also found that rising sea levels coupled with changing wind patterns are causing high tidal waves and inundating habitable areas.

The central government, which aims to protect the coasts from erosion as part of its climate change action plan, informed Parliament in December 2018 that sea levels along the Indian coast are projected to rise from 3.5 inches to as much as 34 inches by the end of the century due to global warming.

Such projections should be taken very seriously in Odisha, said Panda. “Sea rise and related deprivation of coastal communities is a major concern now, and our adaptation efforts are not tuned in a way they should be,” he added.

Villagers in Udayakani claim they have seen the sea advance faster since 1999, when the Super Cyclone destroyed much of the coastline, forcing residents to resettle on paddy fields further inland.

As erosion and sea-level rise have reduced the amount of available farm land, more people have become landless labourers or have migrated to other cities in search of work.

The number of households in Udayakani has gone from 56 to 44 over two decades, said NA Shah Ansari, a journalist running a community radio network in Puri.

Meanwhile, sea water incursion has contaminated wells and increased salinity in the soil, making it less fertile. Coconut trees now yield only a handful of fruit each harvest, instead of dozens, says Arjun Pradhan, a resident of Udayakani.

People who rely on the water from wells for drinking and bathing have also reported health problems, such as jaundice, stomach, joint and digestive issues and skin diseases. “People are reluctant to marry their daughters off to boys in our village because there is no fresh water here,” Pradhan says.

Satabhaya, which lies on the coastal side of Kendrapara district, has lost almost all of its six villages to sea erosion. The situation became so severe that the Odisha state government in 2016 established a resettlement colony 12 km away.

In 2008, erosion ate away 800 metres of beach in Pentha village, around 15 km from Satabhaya, prompting state officials to support the construction of a kilometre-long geo-synthetic sea wall.

The geo-synthetic tubes that support the wall are made with packed layers of stones in plastic nets and used to stabilise the ground and prevent erosion. The World Bank provided 75 per cent of the funding for the Rs 32.92 crore-project, the first-of-its-kind in the state, with the central and state governments contributing 15 per cent and 10 per cent respectively.

Since the project was completed in 2016, villagers say they have not witnessed sea erosion along the beach at Pentha. But there are concerns about whether the costs outweigh the benefits and what impact the wall has on the surrounding landscape.

“Preventing coastal erosion and/or protecting the coastal ecosystem and communities have become a major task of various coastal nations, consuming almost 4.3 per cent of the world’s GDP,” said Kakani Nageswara Rao, professor emeritus at the Department of Geo-Engineering in Andhra University.

“Experience shows that cost-intensive seawalls do not protect the coast. Seawalls in general are aimed at protecting the property. But the beaches are permanently lost.”

To adequately address the crisis, policies and programmes need to be more integrated, Panda said. He believes the state climate change action plan remains more like a wish list and the programmes by various departments don’t add up to achieving its goals.

Rather than finance the high-cost infrastructure solutions, Panda said adaptation efforts need to take local communities into consideration and ensure their participation in decision making.

He also emphasised the need for nature-based solutions, such as regeneration of mangrove forests, which serve as natural barriers to waves, and land-management practices like farming and other vegetative interventions that are more adaptive to soil with high concentrations of salt.

Susanta Nanda, project director of ICZMP, said since the project’s start in 2010, it has endeavoured to improve the livelihoods of coastal communities in the state. “ICZMP assisted around 650 self-help groups in alternative livelihoods in integrated pisciculture [fish farming], dairying, coir making activities,” Nanda said. Coirmaking has proven to be a successful enterprise among women self-help groups, which can earn between Rs 10,000 and Rs 20,000 ($145-290) a month, he added.

In the village of Gundalba, to the north of Udayakani, villagers are fighting the changes to the coast without government assistance using the type of land-management techniques Panda suggested.

In the year 2000, women in the village formed a committee to protect the Casuarina forest along the coast. Their efforts have increased the forest cover by 65 acres over a decade and brought back wildlife, said Charulata Biswal, the president of the committee.

“When we started our activities, there was not a single deer, now there are so many,” she said. The increasing forest cover has helped prevent salt water from inundating the soil, and salty moisture triggered by waves from damaging crops, Biswal added.

And since the crop land nearer to the forest has less salinity, the villagers have again started growing groundnut. Biswal and other women say this method could serve as a model for other villages struggling with the same challenges.

“Our efforts to protect the forest have helped save the cropland in our village, though it is for the researchers to find the real benefits. If the government backs such efforts by communities in a bigger and planned way in all villages facing sea erosion, [the] situation will improve drastically and we will feel that we have achieved something,” she said.