The dictum on desertification: UNCCD CoP14 presents an opportunity 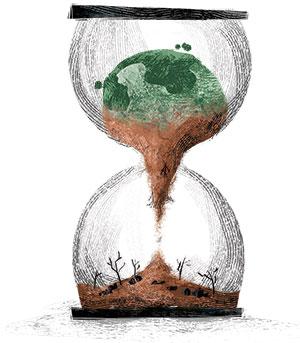 The United Nations Convention to Combat Desertification (CCD) is Rio’s Stepchild, we said. Why? Because it was a neglected and frankly unwanted agreement, signed by the world at the Rio Conference in 1992.

It was agreed because African and other developing countries wanted it. It was a sop — give them the crumbs of an agreement, which the rich world did not understand or believe in. In Rio, climate change was the top agenda.

Next came the issue of biodiversity conservation — a resource largely surviving in the countries of the South, which need to be conserved and access secured. Then there was the issue of forests — a convention was proposed and staunchly opposed by the developing countries who said that it would infringe on their national resources. In all this acrimony, the desertification convention was born.

Today, close to 30 years later; now when the world is beginning to see the deadly impacts of climate change; now when it is still losing the war against the extinction of species and is faced with the dire prospects of catastrophic changes, this forgotten, this neglected convention, must shed its stepchild image.

It is the global agreement that will make or break our present and future. The fact is that management of our natural resources, particularly land and water — what this convention is concerned about — is at huge risk today; our own mismanagement is being exacerbated by weird weather events, which is making millions more vulnerable and more marginalised.

But there is another side as well. If we can improve our management of land and water, we can shave off the worst impacts of climate change. We can build wealth for the poorest and improve livelihoods.

And, by doing this, we mitigate greenhouse gases (GHG) — growing trees that can sequester carbon dioxide; improving soil health that captures carbon dioxide, and most importantly, changing practices of agriculture and diets is reducing emissions of GHG. So, this convention, needs to be moved from the stepchild to the parent.

Why do I say this? Sample what is happening in terms of extreme rain events in vast parts of the world — developing and developed; rich and poor; urban and rural.

In India, this monsoon, rain has been a curse, not the boon it always is. It has come down in torrents — regions have received 1,000-3,000 per cent excess rain; that is over the average of a day. It has meant that rain submerged vast lands; destroyed homes and livelihoods. '

But what is worse is that flood becomes a drought within no time. This is because the heavy rain cannot be captured; cannot be recharged; and so, there is drought at the time of flood.

Each of these now, not so natural calamities, takes away the development dividend that governments work so hard to secure. Houses and other personal belongings are washed away; roads and infrastructure destroyed and all then has to be rebuilt. It is also clear that flood or drought is not just about climate change or changing weather patterns.

The fact is drought is about the mismanagement of water resources; where not enough rain is being recharged or water is used inefficiently and inequitably. Flood is about the sheer inability to plan for drainage; for our lack of concern to protect the forests on watersheds or the near criminal act of building and destroying the flood plains.

Then there is also the fact that global temperatures are increasing; intense heat events are being seen in many parts of the world. There is more heat and dust everywhere. In the South Asian subcontinent, temperatures have spiked to unimaginable levels. High temperature means less moisture on ground; more dust and more desertification. It creates the conditions for a dust bowl — which then the winds of over 130 kilometre per hour — over what is called storm winds of 90-100 km/hour sweep away and make a destructive force.

In 2018, over 500 people died in northern Indian states from dust storms. Again, this is the double whammy. High temperatures are only adding to the already heat and water stressed lands. Lack of green cover, increases desertification conditions; over-withdrawal of groundwater; and, poor irrigation practices degrades land over time.

Then there is the over-intensification of land, largely because of the way we are doing agriculture. A report of the Intergovernmental Panel on Climate Change (IPCC) in 2019 rightly indicted the modern agricultural practices for being over-chemicalised and over-industrialised and so adding to GHG emissions. The report has also called for changes in diets, which will make us tread lightly on earth. Our food and our climate change footprint is now connected.

Therefore, this desertification convention, signed so unwillingly in 1992 at the Earth Summit in Rio, is now relevant more than ever. There is also another critical change. At the Rio Summit, northern countries asked what this issue had to do with them. Desertification was not a global issue and so, why should there be an international agreement at all.

In Rio, African nations, who argued for this convention, had drawn important linkages to how price of their commodity was dropping, forcing them to discount their land and this, in turn, was adding to desertification and land degradation.

Today, there should be no doubt that desertification is a global issue—it requires cooperation between nations. The fact is that we are only just beginning to see the impacts of climate change. These will become more deadly as temperatures continue to spiral and this spiral gets out of hand. It is also clear that today the poor in the world are the victims of this “human-made” disaster — local or global. The rich do not die in sandstorms. The rich do not lose their livelihoods when the next cyclonic system hits.

But the fact is that this weird weather is portend of what awaits us. The change is not linear — it is not predictable. It will come as a shock and we will not be prepared for it — the rich in developing world or the developed world. Climate change at the end will be an equaliser — it will impact all.

It is also clear that one impact of this corrosive change — increasing numbers of disasters because of growing intensity and frequency of weird and abnormal weather will make poor, poorer. Their impoverishment and marginalisation will add to their desperation to move away from their lands and to seek alternative livelihoods.

Their only choice will be to migrate — move to the city; move to another country. The double jeopardy, as I have called it, will add to the already-volatile situation of boat people and walls and migrant counting, which is making our world insecure and violent. This is the cycle of destructive change that we must fight. Desertification is then about our globalised world. Inter-connected and inter-dependent.

This is where the opportunity exists. This convention is not about desertification. It is about fighting desertification. The fact is that every way — in which we choose to fight desertification or land degradation or water scarcity — we will improve livelihoods and end up mitigating climate change.

The land and water agenda is at the core of fighting climate change. It is at the core of building local economies to improve the wellbeing of people. To fight poverty. To win the war against human survival. This is what CCD is about. Now, let’s push for global leadership that can drive this change.

This was originally published in Down To Earth's print edition dated 1-15 September, 2019