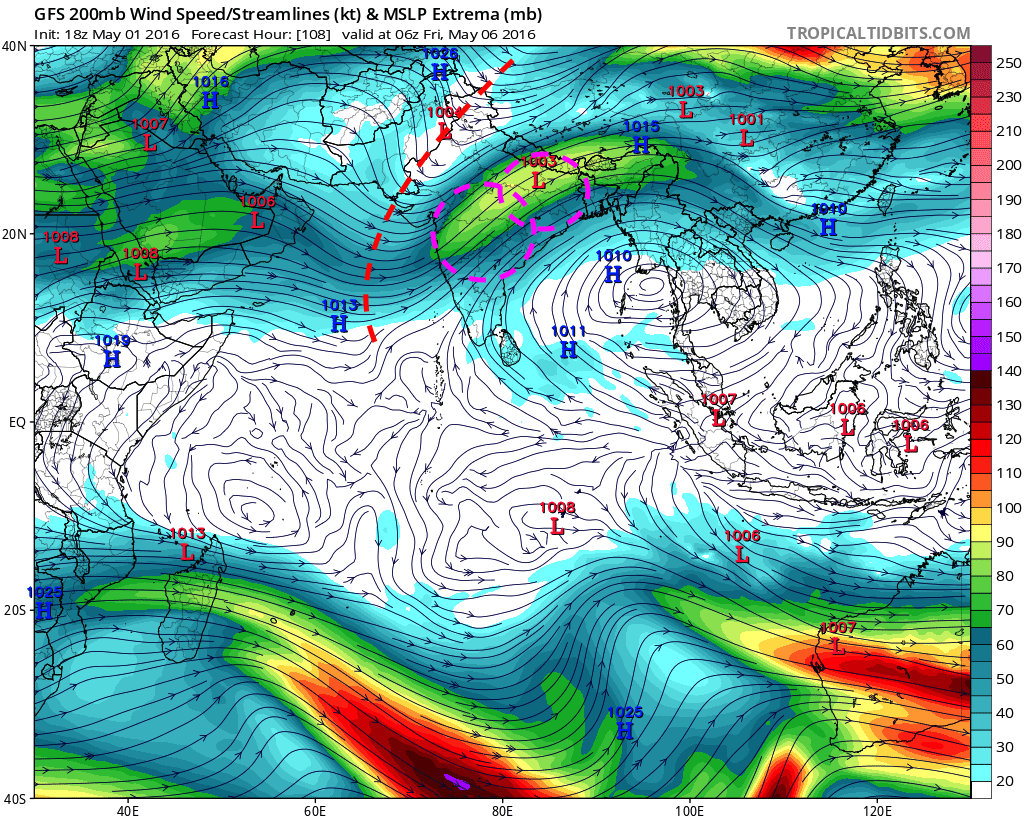 May has begun and usually, for many areas of India, this month is the hottest month of the year. On the very first day (May 1), heatwaves and severe heatwaves were observed in parts of Odisha, West Bengal, North India and Vidarbha. Sri Ganganagar of Rajasthan recorded maximum temperature of 46.3 degree Celsius, which was the highest maximum temperature in the whole of India.
Usually, there are many heatwaves and severe heatwaves in this month and maximum temperatures in Central India go above the 45 degree Celsius mark. Amidst a weakening El Niño and a baking April, a very hot beginning of this year’s May was anticipated by many. However, a very hot beginning is unlikely due to an upcoming change in the weather pattern over India.
A strong upper air trough (elongated low pressure region), popularly referred to as "Western Disturbance" by the India Meteorological Department is all set to arrive in India by the middle of the week and bring active weather in many states. May 2014 was a cooler May for most of India as a result of frequent thunderstorms and rain due to western disturbances. This approaching trough will set the stage for outbreak of thunderstorms (some severe) which will be capable of bringing rain and rain- cooled winds. Daytime heating will take place as these thunderstorms are expected to form during the post-noon hours. However, they will start impacting from the evening/night hours leading to a drop in the temperatures. As a result, there will be a slight relief from the scorching heat in states like Bihar, Odisha, Jharkhand, Uttar Pradesh, Maharashtra etc.
In addition to the approaching western disturbance, presence of local troughs (over different regions of India) will contribute to cloudy/stormy weather.
Below is a day-wise list of impacts expected from this trough.
Tuesday, May 3
As the atmosphere will be highly unstable, severe thunderstorms including hailstorms can be expected in the states of eastern India which includes parts of Bihar, West Bengal and adjoining areas of Jharkhand and Uttar Pradesh. In addition to this, thunderstorms can be expected in the Vidarbha region of Maharashtra, eastern Madhya Pradesh, southern Odisha (areas around Titlagarh) and some parts of Telangana. Scattered thunderstorms can also be expected in the plains of North India including Delhi-NCR and eastern Rajasthan. The hilly states of Jammu and Kashmir and Himachal Pradesh will get precipitation (rain in lower altitude areas and snow in high altitude areas).
Wednesday, May  4
Tuesday-like weather is expected to continue in the aforementioned areas. In addition to this, thunderstorms are expected in more parts of Madhya Pradesh and Western Maharashtra/Marathwada.
Thursday, May  5
Wednesday-like weather is expected in the aforementioned areas. More areas of Telangana, Western Andhra Pradesh, Karnataka and parts of Kerala will get rain/thundershowers.
Friday, May 6
Weather will start stabilising in eastern and northern states of India. However, rain/thunderstorms will spread in more areas of Maharashtra i.e Marathwada and western Maharashtra. Thunderstorms to continue in Karnataka and Kerala.
Saturday, May  7
Thunderstorms with rain to continue in Maharashtra. Stable weather but rise in maximum temperatures expected in Bihar, Jharkhand and Uttar Pradesh.
Uttarakhand too will receive some rainfall in this week, which could help in extinguishing the ongoing forest fires.
जलवायु परिवर्तन से जुड़ी सभी खबरें हिंदी में पढ़ें।
Western disturbance North India Climate Change India Orissa (Odisha) Bihar West Bengal Uttaranchal (Uttarakhand)
Donate Now