The world is already celebrating the US' emissions reduction framework. Our research shows the US climate change action plan is neither ambitious nor equitable. Worse, it is business-as-usual 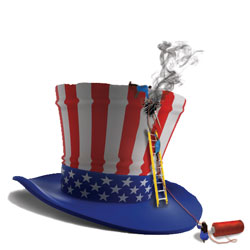 Why should we look at the US to check out its climate action plan? The fact is that the US is the world’s largest historical contributor to greenhouse gas emissions—the stock that is already in the atmosphere and already warming the earth’s surface—and the second largest contributor (after China) to annual emissions. What the US does makes a huge difference to the world’s fight against runaway climate change. It will also force others to act. It is, after all, the leader. And now, after nearly three decades of climate change denial, the US has decided enough is enough. President Barack Obama has said clearly that climate change is real, and his country must act. It has submitted its Intended Nationally Determined Contribution (INDC)—its emissions reduction framework—to the climate treaty secretariat. The world is already celebrating—the prodigal has returned.

My colleague Chandra Bhushan and I humbly disagree. Our research, which we present in our just released report, Capitan America, presents a few inconvenient truths that might throw cold water on the celebration. The US climate action plan is neither ambitious nor equitable. Worse, it is but business-as-usual. When implemented emissions reduction will be marginal. Whatever reduction is achieved, whether due to increased efficiency or a shift in fossil fuel use, will be negated by runaway gluttonous consumption. We conclude, for the sake of the world’s future: American lifestyle can no longer remain non-negotiable.

Our findings are most inconvenient, we know. Our friends in US civil society are sure to accuse us of playing into the hands of the Republican Party—that fearsome free-market gang of climate sceptics. Our position on the need to discuss consumption in climate change will fuel their worst fears: the world wants to close their free-market frontier. We would have agreed with them, except for the following issues.

One, the US is not moving towards low-carbon growth in any respect. There is, therefore, no reason to believe that even if its current plan is not ambitious, it will lead to change in the future as the effort gathers momentum with speed and scale.

Two, more seriously, the dangers of climate change are real and the need for real action urgent. We in India are beginning to see how devastating extreme weather events can be—they are death-dealers taking lives. The world’s poorest, who have not contributed to the emissions already in the atmosphere, are becoming the most affected. This is not acceptable. Climate justice requires effective and ambitious action to cut greenhouse gases.

Three, for many years now, we have been told by our same friends in the US civil society that we must always fear the return of the Republicans, for they will destroy even the visage of US climate change policy. And when a Democrat president is elected, the advice is we need to “tone down”, be pragmatic and allow that “liberal” person to steer the climate course. Actually, for many years, their game of thrones has held us to ransom. Decades have gone, and deadly greenhouse gas emissions still continue to rise.

Our concern is different. US lifestyle and consumption patterns are aspirational and addictive. Quite simply, everybody wants to be an American. Every citizen of the developing world wants to either live in America or live like an American. If it were possible to attain such a lifestyle and yet combat climate change, our concern would be unfounded. But that is not possible. If Americans continue to guzzle, it is not possible to expect that the rest will not follow in their footsteps. The world—the US and us—cannot combat climate change without changing the way people drive, build homes or consume goods. The C-word is the C-word.

Climate change demands that the world collaborates and acts collectively. The US is the world’s most powerful economy, a world leader. This leader has to point to the direction of change that must be credible and meaningful. Otherwise, the deal to save the world will not fructify.

It is also important to note that the less the US does, the more it jeopardises our future. Its lack of ambition means it appropriates more space of the Planet’s limited carbon budget, leaving little for the growth of countries like India and those in Africa. Worse, these countries will be forced to make high cost changes to reduce emissions. This cannot be acceptable. It will not just shift the burden of transition to us; it also means that the US will not make the transition to low-carbon growth. This is deadly for all.

So, it is time we stopped tiptoeing around the US. It is time to call a spade a spade: US obduracy on climate change has ensured that the world today is in the danger zone and will go critical soon. Since 1992, when the framework convention on climate change was signed, the US has played offence, finger-pointing at others and justifying its own lack of action. It is time the rest of us stopped playing defence. For the Planet’s sake.

PS: You can download the report, Capitan America, from www.cseindia.org