Wolf at our door

The US has made the world rewrite the climate agreement so that the targets are based on voluntary action, not science 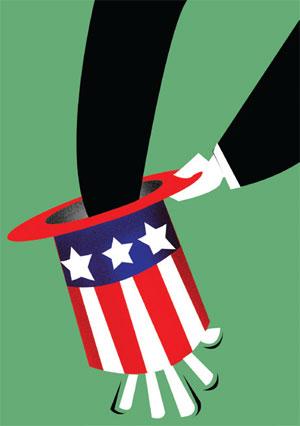 The big bad wolf will come. This is what has dictated global climate change narrative for so long. The world has tiptoed around actions that need to be taken at a certain speed and scale to curtail emissions; global agreements have been bent out of shape to appease climate deniers. And in Paris, the world literally scraped the bottom of the barrel to tie up a weak and unambitious agreement to control climate change. All this, because it believed that doing anything more would get the opposition, particularly in the US, riled up.

As a result, the US has made the multilateral world change rules; reconfigure agreements, mostly to reduce it to the lowest common denominator. Then when the world has stitched together a weak and worthless deal, the US has walked out of it. All this while, its powerful civil society and media has hammered home the point that the world needs to be accommodating and pragmatic. “Our Congress will not accept” or, worse, “Republicans will come” has been the common refrain.

This happened in 1992, when in Rio, after much “accommodation” the agreement to combat climate change was whittled down; targets were removed; there was no agreed action. All this was done to bring the US on board. But it walked out. Then came the Kyoto Protocol, the first and only framework for action to reduce emissions. Here again, in December 1997, when climate change proponents Bill Clinton and Al Gore were in office, the agreement was reduced to nothingness—the compliance clause was removed, cheap emission reduction added and loopholes included. All to bring the US on board. Once again, they rejected it.

Then came Barack Obama and his welcome commitment to climate change actions. But what did the US do? It made the world completely rewrite the climate agreement so that the targets are based on voluntary action, not science and the contribution of each country. Each country is allowed to set targets, based on what they can do and by when. It has led to weak action, which will not keep the planet temperature rise below 2°C, forget the guardrail of 1.5°C. This was done to please the Americans who said they would never sign a global agreement which binds them to actions or targets. Paris, fatally and fundamentally, erased the historical responsibility of countries and reduced equity to insignificance.

At all times we have censored the truth of the urgency of climate change; or the need for effective and drastic action by the more powerful and rich countries; or the need to curtail emissions by curtailing or changing lifestyles so that efficiency gains are not lost because of more consumption. The world has restrained its language so that it could get the participation of the most unwilling—the proverbial, and now the real, big bad wolf.

Now that the big bad wolf has come to power, what will the world do?

There is no doubt that Donald Trump is of another shade of this grey. He denies that climate change is happening. He is also certain that the US needs to dig more coal; build more power plants and do everything to ramp up production, which will increase greenhouse gas emissions.

What do we do now? This is the zillion dollar question. Climate change is happening as seen in extreme weather events. It is impacting the poorest in the world, the ones who have least contributed to the stock of emissions in the atmosphere. Will the world now call a spade a spade? Or will it engage in more meaningless censorship so that it woos the undesirable and, in my belief, unchangeable?

I cannot speak for the US civil society, which seems to relish its beltway games. But I do know that we have no option but to push for greater attention and action on climate change. Our priority in India is to reinvent growth without pollution: find ways to urbanise without first investing in private transport systems and then investing in cleaning up the air; or find ways to provide the energy-poor with clean power without first investing in electricity grids that do not reach them. These are our imperatives. Countries like India have the opportunity to do growth differently and we must.

But it is also a fact that the coming of Trump will make it harder for all environmentalists, particularly those working in the emerging countries of the South, to argue that we must stand different. The protectionist agenda will push against globalisation and encourage all to dig deeper and harder to get to the last lump of coal to burn. Forget the climate change crisis. It is tomorrow’s problem.

It is also clear that the coming of Trump will also stop us from scaring ourselves into restraint and self-censorship. The big bad wolf is not coming; it is here. The only way ahead is to confront the reality that the world is getting warmer and the future more insecure and catastrophic. Only then can we hope to change our future.