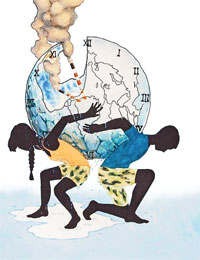 What we desperately shut our minds to is once again being pronounced ever more clearly: climate change is here; it is already bringing devastating extreme weather events; it will become worse in the years to come. In late September, part 1 of the fifth assessment report (AR5) of the Intergovernmental Panel on Climate Change (IPCC) was released in Stockholm. The panel was extra cautious and even timid in its examination of the issues, but the conclusion is dire nevertheless: the world has pumped so much carbon dioxide and other greenhouse gases into the atmosphere that we are in for some extra rude surprises.

Climate sceptics, who had torn apart IPCC’s last report, are still trying for ways to manipulate public opinion. They know that public perception is not based on hard science or its many nuances. It can be influenced by getting a single message out however distorted it may be. So even before the report was released, there was a selective leak that the report has found a “pause”—the world is not warming as fast as predicted earlier. This word was quickly circulated, media picked up the buzz and they hoped opinion would be formed.

Unfortunately for the sceptics, this tactic cannot work so easily anymore. People across the world are beginning to experience some change or the other in the weather pattern. They are seeing increased activity of tropical typhoons; unseasonal and extreme rain events leading to devastating flooding; extreme heat and cold and the melting of the Arctic. They hardly need IPCC to tell them about the inevitability of climate change.

The fact is that IPCC never said that there was a “pause”. A selective reading of a leaked draft report was used to spread the canard. The final report states that the rate of warming over the past 15 years (1998-2012) is less than the rate calculated since 1951 per decade. But the report qualifies this by saying that the base year (1998) was when El Nino was the strongest and the world had seen higher than ever temperatures.

Therefore, not only is there no evidence of a pause, but on the contrary, there is evidence that past scientific models and projections have been accurate and reliable. For instance, it is now confirmed that the atmosphere and oceans have warmed; the amount of snow and ice has diminished; and the concentrations of greenhouse gases released because of human activity have increased manifold. That is what should frighten us—not that scientific observations were wrong but that they were right. For the Indian subcontinent, there is news and it is not good. This is the first time IPCC has included special mention of the region’s true finance minister, the monsoon. Till recently, most regional models did not take into account this capricious phenomenon, which rules our lives, so there was little knowledge about how precipitation patterns would behave in an increasingly warmer world.

Now the models project the following: there is medium confidence (IPCC terminology used when models predict less than high certainty) that Indian summer monsoon circulation will weaken but will be compensated by increased moisture content in the atmosphere because of warming oceans, ultimately leading to more precipitation. More rain is predicted but worryingly in fewer days. The monsoon, says IPCC, will probably be most impacted by extremes in Indian as compared to elsewhere. IPCC report also says monsoon onset is likely to become earlier and retreat very likely delayed, leading to longer rainy seasons.

While IPCC juggles with the degree of likeliness—its definition being that very likely signifies 90-100 per cent certainty and likely 66-100 per cent certainty—science theories are being enacted in the real world. In India we are seeing right now how the monsoon has still not retreated from the subcontinent—there is devastation in Gujarat, Uttar Pradesh and eastern India because of untimely rains. When extreme rainfall happened in Uttarakhand, which took over 6,000 lives and destroyed an entire region, it was said that rains came too early.

Therefore, it is time science led to action. At the global level nations have to act to reduce emissions—drastically, urgently and keeping in mind issues of equity. At the national level, our agenda must be to cope with extreme, unseasonal and variable rainfall. This means becoming obsessive about water management. The fact is that climate change is not all bad news for us because it will rain more, not less. The key is to learn to hold the water, store it and recharge groundwater with it. It will also mean planning better to forecast extreme rain events so that we can mitigate the damage of the Uttarakhand-type calamity. It will mean doing all we know we must do: value the raindrop. Rural development minister Jairam Ramesh and Gujarat Chief Minister Narendra Modi were only half right when they said India needs toilets not temples. In an increasingly warmer world, India’s only temples can be the ditches, drains, lakes and rivers that can hold the rainwater and not let it cause floods or droughts.