Code of ethics for scientific "eco-tourists"

Most of the world's tropical forests are in the developing world. Guidelines have been suggested for researchers to regulate the flow of data to the developed world. 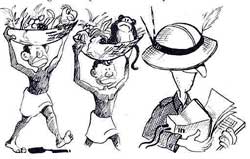 OVER THE years, the world at large has come to realise that the results of science must cease to remain the private property of a privileged few. This is all the more significant today, when the results of science have touched the very problem of existence. The need for public understanding of scientific knowledge is crucial in the context of the implications of threatened natural resources worldwide, and science plays a critical role in the development of viable alternatives for conserving natural areas.

Accurate knowledge of natural systems is essential for developing management plans and identifying sustainable economic activities. The information in this case must come from traditional, local knowledge as well as Western scientific research methods, particularly those in vogue in the Third World. Too often, projects based on Western-generated data fail because local knowledge and traditions are systematically ignored.

Developing countries need more of their own field scientists. Though most of the world's tropical forests are located in developing countries, ironically enough, only 7 per cent of the world's trained ecologists come from these areas. Furthermore, these countries generally have limited resources to support their scientists or afford the kind of communication systems that support scientific studies in the developed world. Traditionally, the scientist from abroad has filled the gap. Thus we have, in a sense, a "scientific eco-tourist". Therefore, it is imperative that just as there should be a code of ethics for tourists, so should there be one for visiting scientists.

Although the days of massive exploitation (such as the export of important archaeological collections) may have ceased to exist, the flow of data and specimens still moves predominantly to the developed world, a situation some have described as "academic imperialism". No wonder most Third World countries have instituted increasingly stringent requirements on foreign researchers. For example, many countries now require lengthy reviews, hefty research fees, copies of publications and duplicate specimens. Dissemination of the research results, however, still falls short at the national level and is usually nonexistent at the local level.

By necessity, therefore, social scientists must establish rapport with the environment in which they work. With notable exceptions, however, most biologists do not. As a result, indigenous communities feel exploited and some have imposed their own limits on researchers. For example, the Kuna Indians of Panama and the Awa of Ecuador have developed regulations for visiting researchers, and the United Nations' Food and Agricultural Organisation recently ratified a "code of conduct for international collectors and users of germplasm", developed initially by a coalition of Latin American grassroots conservation organisations.

Given the increasing demands by local communities and the growing awareness of the value of indigenous knowledge, greater exchange is essential for field researchers. This communication is as important for archaeologists working on Native American sites as it is for biologists working near indigenous communities in the Amazon.

Many scientists are discovering that their research sites are shrinking as animal and plant resources are destroyed in the face of increasing human and economic pressure. Without real community participation, understanding and support, this loss of biodiversity will continue and indigenous knowledge in traditional cultures will become more and more Westernised.

A "scientific code of ethics" is the interesting outcome of 16 years of field research experience with the University of California Research Expeditions Programme, a model public research participation programme that provides exchange opportunities between scientists, educators, the public and their counterparts in the host country. Assisting Third World countries to develop their own scientific infrastructures is a goal of the "code."

Thus, it includes suggestions for training students at all levels as well as fostering in them interest in science and environmentally sound economic activities. Although the entire "code" may not be applicable to every situation, its spirit and aims have general validity. The "Code" helps bridge the gap between scientists and the public; it fosters mutual respect and encourages sharing of knowledge and resources. This kind of interaction is critical for developing the global partnerships that are necessary "in a world where the results of science touch the very problem of existence."

This is an extract from an article by Jean G Colvin of the University Research Expeditions Programme, University of California, Berkeley. The article is in Conservation Biology.