With less than 15 days of negotiations left, parties at the Bonn climate change conference were urged to speed things up

With less than 15 days of negotiations left, parties at the Bonn climate change conference were urged to speed things up 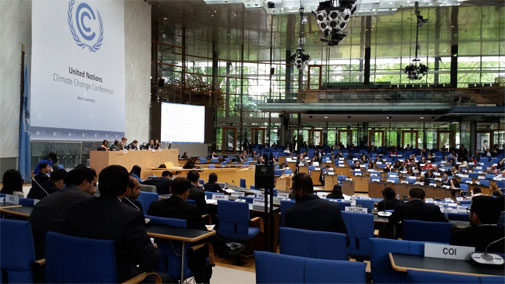 The first week of the Bonn climate conference started with great promise. Laurent Fabius, France’s foreign minister, said, “The objective of this exercise of negotiations is to have a pre-agreement in October to ensure that we have an agreement in Paris in December.” Fabius is the incoming president of the 21st meeting of the Conference of Parties (COP 21) to the United Nations Framework Convention on Climate Change (UNFCCC).

Negotiations over a 90-page document proved to be an uphill task for the delegates. The document had emerged from the eighth part of the second session of the Ad Hoc Working Group on the Durban Platform for Enhanced Action (ADP) held in February in Geneva.

The ninth session began with the co-chair of the ADP, Daniel Reifsnyder of the US, announcing that the task was to consolidate and streamline the negotiating text. “This process will not remove any views from the table,” said Reifsnyder.

The ADP sessions were divided according to sections of the Geneva text—mitigation, adaptation and loss and damage, finance, technology development and transfer, capacity-building, transparency of action and support, timeframes and compliance. Separate sessions were allocated to condensing these sections throughout the week.

This streamlining brought with it a lot of confusion. The negotiating parties or delegates from various countries failed to understand what they were doing even though the modalities of this process were discussed in the first group.

The first reading of the text intended to reduce the duplicity, overlap and repletion. The secretariat prepared the consolidated paragraphs (paragraphs with similar options) and asked for consensus on combining these options.

A myriad of issues was raised by various parties in the discussions. It was stressed that “differentiation” was a cross-cutting issue that needed to be addressed not only in the “transparency” section but across all elements.

The delegate from India said, “Although it is understood that the questions about concepts will continue, the rules of the exercise cannot be changed every day. The suggestion was to try to overcome the redundancies and duplications. At the appropriate time, parties can discuss differentiation but there is a need to have similar progress in all the sections of the elements (of the Paris agreement).”

Similarly, delegates flagged the issue that editing and consolidation would distort the context of the text and, hence, should be addressed with caution.

The G77 and China group provided the secretariat with their whole proposal for the finance section consolidation, deleting 10 options that were presented by their member countries. The Canadian proposal for this streamlining was looked at as a “cherry-picking” exercise.

Questions were raised regarding the status of brackets versus slashes in the text. It was announced that it would be addressed at a later stage.

There was a stock-taking session on June 4, which shed light on the fact that after three days of the streamlining process, the parties, together in all the sections, had managed to reduce the size by only about 5 per cent.

On June 5, the ADP co-chairs had to issue clarifications about the working of these sessions. Given the slow pace of work, they suggested the following measures to help parties accelerate the process:

As the next step, ADP Co-chair Ahmed Djoghlaf (Algeria) said that the next stock-taking session would take place on Monday, June 8.

Between now and Paris, the parties have less than 15 days of negotiations left. Hence, the slow process of text consolidation proved dismal. This week will hopefully see parties move away from the editorial exercise and get down to negotiations to finalise text for Paris agreement.