Left-of-centre agenda must not be abandoned

Over the past six years or so, the Congress seems to be undergoing change both with regard to the balance of power within the organization and its ideological orientation.

It is fashionable to take the Gandhi family to the cleaners because of its dynastic grip on power. But it must be said that much of the positive change this country has witnessed has been initiated by the two Gandhis who are in Parliament.

The Congress has had a long history of intra-party authoritarianism, which reached its apogee under Indira Gandhi but was hardly begun by her. Mohandas Gandhi was the first autocrat—there was much more than mere playfulness in Amrit Kaur’s habit of referring to him as ‘dear dictator’. Gandhi often used his moral authority over the party to take it in directions he willed over the collective will, even when he held no position.

Sonia Gandhi is by no means an undiluted democrat. But it appears she allows some amount of space to her party colleagues and to Prime Minister Manmohan Singh to a large extent. The partnership between party president and prime minister does approach equality. Sonia Gandhi does set the framework for policymaking in a general sense. And we should be thankful that she and Rahul Gandhi do. It is arguable that had Singh been left to his own devices he would have run an agenda oriented to Washington Consensusstyle liberalization policies, which in times of meltdown would have pressed harder on the poor and working people.

Whatever the impulse, it is encouraging to note that the Congress-led government is pursuing a left-of-centre agenda. Most important in this is the National Rural Employment Guarantee Scheme. It could be nobody’s case that the scheme is perfect—if for no other reason then for its uneven application countrywide. Many states have dragged their feet and as in all areas corruption has vitiated it. But its gains, though modest, are real, even if some key objectives— apart from poverty-alleviation— are not being followed. I refer to the injunction that projects under the scheme should focus on creating assets that will have a lasting environmental impact and help secure both livelihoods and food security through afforestation, watershed rejuvenation and such like.

There have been other initiatives. The forest rights act provides some kind of a basis to protect the rights of tribal and other people dependent on forest. How stringently it will be summoned to protect forest dwellers from statebacked entrepreneurs especially in the mining sector remains to be seen, but the indications are encouraging. Not long ago, environment minister Jairam Ramesh put the Odisha government on notice with regard to the Niyamgiri mining project. 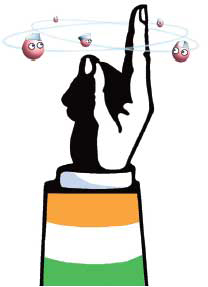 One area in which the Union government must act decisively is land reforms. A commission has been set up to look into the matter. Like most commissions this must not end up producing a report. The problem is that land is a state subject, so there is not much that New Delhi can do as things stand. The Centre must explore options. It should not be unthinkable that a law be passed to allow the Centre to initiate radical land reform—that is the ultimate solution to pave the way for a more equitable order in rural India.

Lest this look too rosy a picture, we should take note of some of the downsides. The policy on special economic zones (SEZs) is the most obvious candidate. Not only does it infringe people’s rights by forcefully acquiring swathes of land, thus redistributing from the poor to the fabulously wealthy, it also alienates revenue from the state. This is certainly not an ideal strategy when most states are cash-strapped. It also creates enclaves that substitute corporate for democratic governance. The good thing is that protests are forcing the government to take its foot off the pedal.

The ultimate challenge for the government is to create a less unequal and more just society. This will entail massive redistribution of resources from the super-rich to the poor. Corporate affairs minister Salman Khursheed has said some corporate salaries are obscene. One can easily say the juxtaposition of extreme opulence and extreme poverty is equally obscene and a progressive taxation system ought to be in place.

That would, however, be expecting too much. Nobody expects the Congress to make any radical moves towards reducing inequality, but as long as they remain committed to a welfare agenda, incremental change would eliminate abject poverty in the country and at least provide food security to all citizens.

Suhit Sen is fellow at the Centre for Studies in Social Sciences, Kolkata