Despite its disproportionately large carbon emissions, the US wants proportionate restrictions on the developing countries 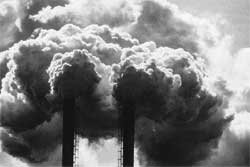 on october 6 a very significant environmental meeting was held in Washington dc. It was a meeting that policy-makers in the South should take serious note of, because, it could have serious impact on their future economy and environment.

The all-day meeting was called by the White House as a preparatory step for formulating the us stand for the forthcoming climate change negotiations to be held in Kyoto, Japan, later this year. It was chaired by president Clinton and vice president Gore and almost half of the us cabinet attended it. The meeting was significant from the perspective of the developing countries because it seemed to be marking the beginning of the end of one of the most important principles of global environmental policy -- the principle of shared but differentiated responsibility.

Despite the blurred rhetoric of the meeting, the message seemed to be that for the United States to be able to do anything on climate change, the South would also have to do its "share". Although the exact magnitude of this "share" was never specified, it was made clear that the us will look unfavourably at any treaty that does not spell out strict restrictions on carbon emissions for the developing countries.

If this turns out to be so, it would mean that developing countries would be asked to make 'similar', if not the same, percentage emission cuts as their industrialised counterparts. This, despite the fact that the historical and current responsibility for carbon emissions lies squarely with the North -- 80 per cent of the emissions come from the 20 per cent of the world population living in the North.

The case being made by president Clinton is that emission reductions in the developing countries are necessary because, owing to their higher rates of population and economic growth the emissions from the South will equal those from the North by 2035. If this is true, it means that the current emissions from the North are so disproportionately large (the us alone contributes 22 per cent) that it would take as many as 40 years for the South to catch up.

Despite all the talk of "fairness" amidst which the White House unwrapped its new policy, the South cannot be expected to react kindly to what was said at this conference. For the South, the real question is to figure out just how much of what was said in Washington represented a true change in the us policy and how much was pandering to domestic constituencies. At least, part of what transpired at this conference could have been part of the grand strategy -- having thrown down the gauntlet, the us can now shift the blame on to the South by claiming that while it is willing to do its part, the developing countries are holding the treaty back by not doing their "share".

However, at the same time it was also abundantly clear that much of Clinton's rhetoric was a response to the us $1.3 m advertising campaign that has been launched by industries opposed to a strong climate treaty.

These advertisements suggested that:

• the rest of the world is dictating policy to the us:

• prices of everything from gas to eggs will skyrocket as a result of this policy and;

• the developing countries are getting a free-ride while the us consumers are being handed the bill.

The success that this campaign seems to have had in Washington does not bode well for the climate change treaty and is certainly not a good omen for the South.