Bringing nature to your doorstep—I often use this cliche in my popular writings. A few days ago nature, literally, visited our doorstep. Anchal, my wife, called out to me to come to the front door.

With the wire mesh door closed, we often watch nature unfolding its secrets. A few feet from the front door is a large overgrown Rangoon creeper (Quisqualis indica). Clusters of lovely pink flowers adorn the creeper when it is in full bloom. In the monsoon, it acts as a food plant for larvae. One of the caterpillars that is seen on it every year is that of the moth Thyas coronata. The caterpillar grows up to three inches in length, and its brown colour with dark stripes helps it camouflage really well on the brown stem of the plant.

On one occasion, when one of the babblers caught what seemed a particularly juicy “cat”, another bird tried to steal it. A comical sight followed (not for the caterpillar, though). Each of the birds, with one end of the caterpillar in their beaks, tugged, pulled and fought over the “cat”. Finally, one of them prevailed, but this was one stretched caterpillar, by the time they sorted out their differences. 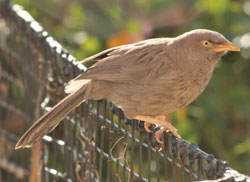 How well the babblers knew the caterpillar behaviour emerged when we saw them probing the ground. These caterpillars pupate under ground, where they make their cocoons. The birds began to dig up caterpillars that had just begun making their cocoons. On one occasion, a particularly hungry babbler actually pulled up a cocoon and proceeded to feast on it.

Just like in life, success breeds copiers in nature too. Watching the babblers feeding on the caterpillars attracted a Himalayan bulbul, two Red-vented bulbuls and a male House sparrow. Of course, none of these birds were successful in hunting down the “cats”. They relied on unsuccessful attempts to steal a morsel or two from the babblers.

In the 20-odd minutes that we spent observing the birds, each of the seven members of the babbler flock would have eaten four to five caterpillars each, or perhaps even more. How the birds knew the caterpillars would be here, and how they knew that they pupate underground in soft soil, remains a mystery. As for the caterpillar, there are many more of them still on the Rangoon creeper. So completion of their life cycle and emergence of the moths does not seem to be a problem.

Sanjay Sondhi is with conservation organisation Titli Trust in Dehradun