Will the southwest monsoon arrive on time over the Andaman and Nicobar Islands?

Will the southwest monsoon arrive on time over the Andaman and Nicobar Islands? 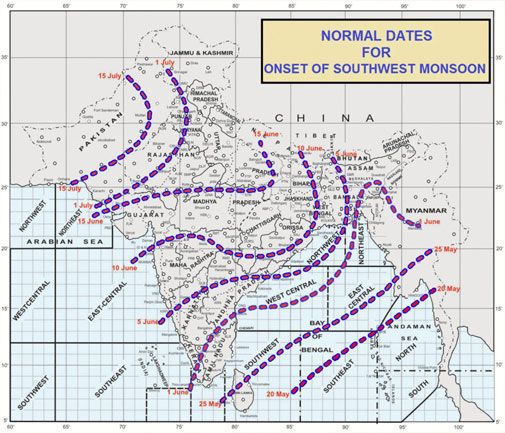 As May begins, the countdown to the onset of the southwest monsoon in India has started. As per the standard timetable, it is normally expected to reach the Andaman and Nicobar Islands region about two weeks from now. Usually, by May 15, monsoon reaches the south Andaman Sea. By May 20, it covers almost the entire Andaman and Nicobar Islands. By May 25, it covers most of Sri Lanka, some parts of Myanmar and by June 1, it arrives in Kerala, most of Tamil Nadu and southeast Andhra Pradesh.

However, it’s not that easy for the monsoon to follow a strict timetable, just like we find it hard to do so in our daily lives. There are many factors which determine not only monsoon’s performance, but also its timetable in a given year. The monsoon onset dates (shown in the image above) have been calculated by India Meteorological Department (IMD) based on rainfall recorded decades ago.

People often say that when they were children, monsoon used to arrive over the mainland of India on time, but they have been seeing variability in the onset of monsoon over the last few years. As a result of the natural variability in the monsoon system, these onset dates rarely hold true now (the southwest monsoon used to reach central India around June 10 earlier, but it doesn’t anymore). Hence, there is a strong need to follow new monsoon onset dates or a new timetable. Weather factors are also responsible for the variations in the onset date.

But sometimes, the monsoon tends to stall at some places on its way across the Indian subcontinent. An on time or early arrival at the Andaman and Nicobar Islands doesn’t guarantee a timely arrival in the rest of the country.

It has been observed that low pressure systems (such as cyclones) in the Arabian Sea and the Bay of Bengal during May and June can interfere with the onset of the monsoon. The position, intensity and timing of such low pressure systems determine whether their presence would help the monsoon or not. Monsoon’s bizarre progress in 2014 due to Cyclone Nanauk is a classic example. It helped the monsoon progress along the west coast of India, but couldn’t help its progress in the interiors.

There are so many possibilities every year that the accuracy of a long-term forecast of monsoon onset dates is always low.

The monsoon journey in 2015

In my previous blog, I had explained how some basic parameters play a vital role in the monsoon’s performance. 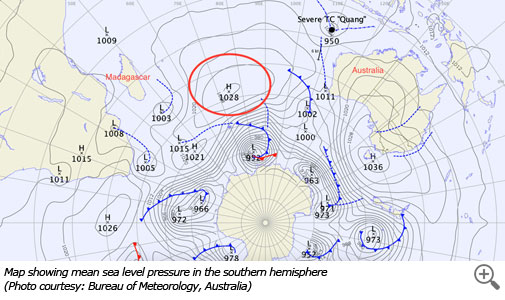 The first thing to look at will be the status of Mascarene High or the “powerhouse of monsoon”. The above image of April 30, 2015 of the higher latitudes in the southern hemisphere shows "H 1028” written in a red circle. H 1028 means a high pressure region having mean sea level pressure of 1028 millibar (we consider 1013 millibar as standard mean sea level pressure) and theoretically, this is the position of Mascarene High. It must also be borne in mind that no two monsoon setups can be exactly similar and hence, some variation occurs. However, this year's setup is fairly impressive if one compares it with that of last year when the monsoon had reached Andaman and Nicobar on time.

If we look at the situation on the evening of May 1, 2015, the star-trails (the winds) seem to be moving much slower as compared to last year.

The good news as of now is that long range weather models show the possibility of an improvement in this setup in the coming days. They also show an increase in the rainfall activity in the Andaman and Nicobar Islands towards May 15 with better organisation of surface winds. But such long range weather models fluctuate a lot and, hence, blindly believing them will not be a good idea.

As of now, the probability of an on-time arrival of the monsoon over the Andaman and Nicobar Islands is higher. In the coming days, we can expect to get a better picture of the expected status of El Niño and the Indian Ocean Dipole during the monsoon period and a close monitoring of conditions will help us have a better idea about this year's monsoon.