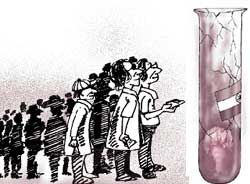 one of the reactions to the nuclear explo-sions at Pokhran has been the imposition of sanctions by the United States on various Indian institutions. These include all research institutes funded by the Depart-ment of Atomic Energy like the Tata Institute of Fundamental Research ( tifr ) in Mumbai and the Institute of Physics in Bhubhaneshwar and various other insti-tutes and companies which ostensibly work on projects that could be used for helping India's nuclear programmes. There has been a lot of hue and cry about the effects of such sanctions on Indian science. Already, a letter has been circulated among the various universities and institutes pointing out the disastrous effects this would have on scientific progress in India.

What do the sanctions mean? Scientists working in targeted institutions cannot collaborate with any institution in the us now. They will, in all likelihood, be denied visas for visits or conferences to the us . Equipment cannot be bought for laboratories from us companies. Are all these necessarily calamitous for Indian science?

What constitutes Indian science?
Before we can answer such a question, we need to ask ourselves what constitutes Indian science? Without going into debates about swadeshi vs international science, I think an operational definition could be that Indian science is what is done by scientists working in India. Though by no means a non-controversial definition, it is certainly the least value-loaded one. Once this is accepted, it follows that we need to look at the various dimensions of science as it is being practised in India.

With the second largest scientific human resources in the world, we certainly have an impressive scientific infrastruc-ture. We have a large network of laboratories associated with atomic energy, space and defence. Besides, there are csir laboratories, regional research laboratories as well as the research institutes like tifr and Indian Institute of Science, Bangalore. At the lowest level, we have some 225 universities. Of course, the scientific world is also divided into "haves" and "have nots". The budget for atomic energy, space and defence is presumably huge though the government rarely discloses the allocated amount. Research institutes, which are relatively few in number, get a disproportionately large percentage of the total amount of funds.

The universities, on the other hand, are constantly starved of funds for even basic facilities. So we have a scenario where a few research institutes are lavishly funded in terms of infra-structure as well as other scientific resources, while the univer- sities by and large languish with a chronic shortage of money even for teaching, let alone research facilities. The state of libraries, classrooms and laboratories in most of the univer-sities, including prestigious ones like Delhi University, has to be seen to be believed.

It is no one's contention that the research institutes are not doing good science. The point is that the whole idea of promoting a few islands of excellence while depriving many others is short sighted. If for nothing else, the science planners have to realise that science is ultimately done by human minds and if the nursery for scientific talent -- the universities and colleges -- are starved of funds, there will never be an overall promotion of science in the country. The result: a caste system within the scientific community.

If you are one of the lucky ones working in the research institutes or the lavishly-funded labs, you have access to the lat-est equipment, journals and, of course, foreign trips. On the other hand, if you happen to one among the vast majority who teach in the universities, you have to contend with libraries which have no funds for journals, labs which have no mainte-nance grants to repair equipment and, in some cases, class-rooms with no lights. It is under these circumstances that the average scientist at a university works, for whom just routine duties are a chore, leave alone path-breaking research. Yet, they do their bit. Occasionally, one finds a paper written by some scientist teaching in some small town in international journals.

Sanctions: what do they entail?
The atomic energy, space and defence establishments have always been restricted in terms of their access to latest technology. Yes, there will be restrictions on their personnel travelling to the us for visits. The denial of visa to Professor R Chidambaram for attending the crystallographers confe-rence is just one example. But other than that, there will not be too much change since they have been operating with quasi-sanctions for a long time.

The people most affected by the sanctions will be the handful of scientists working in research institutes. Most of these people travel frequently to the West for purposes of academic visits and conferences. In some cases, there are active collaborations with institutes and laboratories in the West. These activities will definitely be curtailed.

As for their poor country cousins working in the univer-sities, their horizon is limited to the next Indian Science Congress being held in Jaipur or Chennai. For them the sanctions have no meaning. Occasionally, some university department may face problems in importing some equipment, but this will be rare.

This whole debate about sanctions reminds one of the situation faced by the former Soviet Union and China in the last several decades. Scientists working in these countries had almost no access to information (in the pre-Internet days), exchange visits and certainly no equipment (including computers) from the West. This meant that they had to reinvent the wheel and look for alternatives in which this embargo had minimum effect. Yet, even in the face of this adversity, they came up with world class science. Be it space programme or invention of particle accelerator, the facilities created by them can claim to be among the best in the world while their researchers in many fields are world class.

Contrast this with the situation here. In 1911, Dutch scien-tist H K Onnes discovered superconductivity. To get to the low temperatures, he needed liquid helium which he made from the sands obtained from the Malabar coast of India. Ironically, even today we cannot build a liquid helium plant by ourselves. In all these years, can any one of our laboratories or institutes claim to have made any extraordinary contribution to science? We shall not even comment on these ivory towers doing relevant science, since even the basic design of a bullock cart wheel has not been improved in our country for the last millennia or so.

A positive outlook
There are many reasons why science in India is in such a bad state -- centralisation of decision-making, excessive bureau-cratisation, skewed priorities to name a few. But I think there is a important reason which contributes to the present state of Indian science: lack of self-confidence. A majority of our scientists work on research problems which have already been explored by their Western counterparts. Research agendas are decided by the dons working in Princeton and Berkeley. Rarely do we see a new field being explored by them or even any new fundamental idea being generated. It is then obvious that these people who tread the trails blazed by their brethren in the West, will also seek recognition by the West. This explains the visits and conferences to the West, of course at a cost of the exchequer. The efficacy of these visits in promoting good science in the country is certainly questionable.

The sanctions imposed by the West need to be seen in this perspective. It could, in fact, have a very positive impact on Indian science. May be our scientists will finally be forced to leave the apron strings of their Western counter-parts. Who knows, in this process we may even see the blossoming of truly Indian science, one which is not only practised here but is born out of the minds of researchers who are intellectually free.