COVID-19 lockdown: A ventilator for rivers

Of 36 monitoring units placed in the Ganga, water quality at 27 points was found suitable for bathing and propagation of wildlife and fisheries in the lockdown period.

The novel coronavirus disease (COVID-19) lockdown has put millions in the throes of adversity — and yet, there is a reason to celebrate. Over a month into the nationwide lockdown, air and water pollution levels have shrunk and the wildlife is free.

We have inadvertently been cruel to nature, but the lockdown elicited a change of course. They say ‘Coronavirus is Earth’s vaccine. We’re the virus’. Perhaps, it’s true.

Status of rivers in India

India’s water bodies are in a poor state. In the name of economic growth, most rivers and streams have been turned into sewer canals and are getting difficult to be treated.

It is estimated that every day, almost 40 million litres of wastewater enters rivers and other water bodies; only 37 per cent is adequately treated. 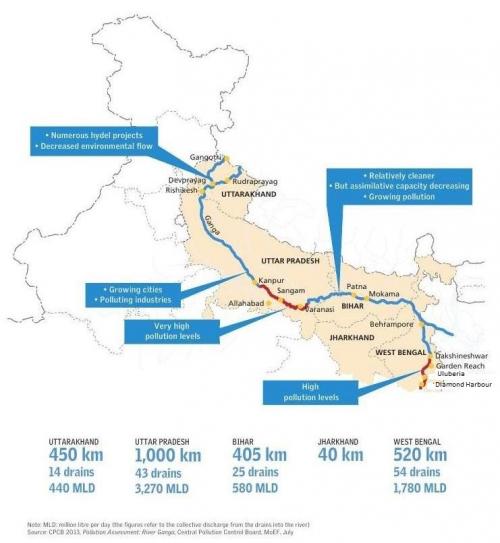 A Centre Pollution Control Board (CPCB) report showed that critically polluted river stretches in the country have increased from 302 stretches in 2016 to 351 stretches in 2018. The finding was based on Biological Oxygen Demand (BOD).

The intensity of the situation can be assessed through the figures presented by CPCB to National Green Tribunal in August 2018. Only five of 70-odd monitoring stations had water fit for drinking; and seven had water fit for bathing.

The Ganga water quality imporved remarkably during the lockdown period. The 2,500-kilometre river has been an important part of India’s history, identity, religious beliefs and economy for thousands of years.

But the river became a dumpyard for untreated sewage and industrial waste. According to CPCB, more than half of wastewater treatment plants in the basin do not comply with the discharge norms.

In 2015, the biggest-ever initiative, Namami Gange was launched with a budget of over Rs 20,000. Despite numerous programmes and huge funds, the Ganga still runs polluted.

The Ganga enters Uttar Pradesh in Bijnor district and passes through major districts such as Meerut, Bulandshahar, Aligarh, Kanpur, Allahabad, Varanasi, among others.

The nationwide lockdown was imposed on March 25, 2020, and within 10 days, signs of improvement in water quality started surfacing. According to the real-time water monitoring data of the CPCB, out of the 36 monitoring units placed at various points of the Ganga river, the water quality around 27 points was found suitable for bathing and propagation of wildlife and fisheries.

On April 4, at Varanasi’s Nagwa Nala, the Dissolved Oxygen (DO) values were found increased to 6.8 milligram/litre against 3.8 mg/l on March 6, showcasing an extraordinary improvement of 79 per cent in DO values.

PK Mishra, professor of chemical engineering at the Indian Institute of Technology, Banaras Hindu University, attributed these changes to industrial lockdown and rainfall on March 15 and 16 that increased the water levels of Ganga.

He stated that 30 per cent of the total BOD load was due to industries along the river, which amounted to 130-150 tons per day.

The total effluent dumped into the Ganga was around 6,500-6,700 million litres per day (MLD) in its UP stretch and onwards. Around 10 per cent was toxic load from industries, around 700 MLD.

Since all major polluting industries are closed, the toxic load is off the river.

Ganga water at Haridwar and Rishikesh was reported fit for drinking due to 500 per cent decrease in sewage and industrial effluents. A dip in the number of visitors at ghats in Haridwar also helped the river water quality.

The Ganga water has become fit for ‘achaman’, which means ritual sipping, after a long time, according to BD Joshi, an environmentalist.

In a CPCB assessment report, it was found that most stretches of the Ganga from Garhmukteshwar in Uttar Pradesh to West Bengal were not only violating drinking water standard, but recorded very less dissolved oxygen and high of total coliform (bacteria from human and animal waste) levels.

Many of the same stretches, according to CPCB’s real-time water quality monitoring of the Ganga on April 19, met the drinking water standards; the biological oxygen demand was < 3 mg/l, dissolved oxygen was >4 mg/l and pH 6 to 9.

More than 80 per cent of pollution in the Ganga is due to domestic sewage from surrounding towns and villages. The rest is contributed by industrial waste.

During the lockdown, domestic sewage would have increased owing to increased demand for water to maintain hand-washing hygiene. Industrial waste, however, stopped entering the Ganga.

Other activities such as tourism, fairs, bathing and cloth washing near the ghats were curtailed. Experts said these observations reflected that domestic sewerage was not the only cause of concern.

Zero industrial pollution increased quality of water in the Ganga, According to another analysis by Manoj Mishra, convenor, Yamuna Jiye Abhiyan.

Mishra said that “when sewage is mixed with industrial effluents, it gets difficult for the river to assimilate pollution. One more reason was high number of western disturbances which brought rain and improved the flow in the river leading to dilution”.

“Improvement in Ganga water is a function of quality and quantity. Water is not being lifted by industries, so there is more flow in the river and pollutants are getting diluted. At the same time, effluents are not being discharged.

He added: “If you leave nature on its own, it survives and comes back to life. But levels will go back up as soon as we reopen the economy.”

There is an urgent need to:

An important question here is: Do we really want such changes to happen at the cost of a pandemic? Or is there an opportunity to reconsider our development paradigms, lifestyles and economic pursuits so that there is less impact on our planet?

Unanimously, synergy for absolute symbiosis between nature and human being is the need of the hour.