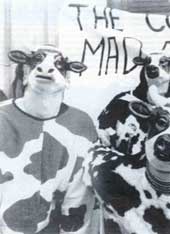 PITY lexicographer. His job is hard as it is. But imagine how difficult it would be if, on defining the word 'up', it was necessary to add that it might just as well mean 'down'. It would be a very Alice-in-Wonderlandish dictionary, which might be worse than no dictionary at all.

It has not quite come to that yet, and although people of my age regret the transmogrification of once useful words like 'gay' and 'nice', at least they do not mean quite their opposite. But there is a grim satisfaction to be derived from what has happened to the phrase, "the authorities say there is no cause for alarm". This now quite simply means: "Sit up and get scared because something awful has ,happened and nobody with responsibilities knows what to do."

Such phrases usually show only surface and one gets little chance to see what lies beneath. However, the mad cow disease is providing a rare and revealing exception. Its scientific name is bovine spongiform encephalopathy (BSE), and it has brought about a worldwide ban on the import of British beef. And at times you may be forgiven for thinking that it i also bringing down the British government, propelling Britain out of the European Union (EU), ruining the lives of the hundreds and thousands in the food trade all over Europe, and may be turning hundreds of thousands of humans as mad as today's dying cows - depending on how alarmed you are by the authorities' denial.

It is a story with nearly everything in it. And it is full of environmental morals. It did not start in March 1996, but has been rumbling on since 1986, when the first cases Of BSE were discovered. It was believed by government scientists that the probable infective agent could not jump species, at least not species as far apart as humans and cows. Nevertheless, everyone believed that the agent prion, a protein smaller than a virus, had come from sheep infected with a similar disease known for 200 years as scrapie.

The name came from the habit of the distressed animals rubbing their heads on walls and fences. But how had the disease spread from the sheep to the cows? Not sure. But a likely pathway from sheep to cows was afforded by the practice of providing high-protein cattle feed containing ground-up dead sheep. This feed, which helped the animals gain weight, was used to supplement the normal diet of grass.

It took two more years after the discovery Of BSE for the practice to be banned and BSE was declared a notifiable disease. The government then ordered the compulsory slaughter of all infected cows. Only three years into the outbreak did the government finally ban the use of offal (including brains and spinal cords) in pies and sausages.

According to a grand old British government maxim, "the scientist should be on tap, but never on top". But this binary regime can have exceptions, especially when political authorities get nervous. By 1989, they were just that. An invitation went out to a senior and very distinguished Oxford zoologist, Richard Southwood to study the problem. His committee promulgated the first environmental moral caution. The committee's report highlighted the "unnatural feeding practices" in modern farming and asked whether feeding mammalian flesh to herbivores enormous might not lead to the transfer of pathogens. The issue had been raised long, before by a Royal Commission on Environmental Pollution, but the authorities (business and political) had seen no cause for alarm.

The Southwood group thought it was unlikely that BSE could be transmitted to relations humans. Other scientists, neither on tap to the government nor in the thrall of agribusiness, were more blunt in their warnings. They stopped their own families from eating beef Quite unlike the minister of agriculture of the day, who put his own child eating a beef burger on television to show there was really no cause for alarm!

The Creutzefeld-Jakob disease or CJD, with which BSE has been linked, was very rare and usually found in older people. It was when it turned up in the young that the authorities warned the public and produced a cause, if not for alarM3 at least for concern. The minister for health told the House of Commons on March 20 that what appeared to be a variant of CJD had surfaced in 10 recent cases, with the average age of the victims being 25. The most likely explanation was that the cases were linked to exposure to BSE before the introduction of the offal ban in 1989.

The effect was electric. British beef was banned from being imported into Europe and beef sales dropped all over the continent. The livelihood of farmers producing French3 German or Italian beef was severely damaged by mere association. Other governments in the EU were forgiven for keeping British beef out until their respective citizenry were convinced that BSE was removed from the food chain.

The British minister for agriculture embarked on weekly trips to negotiate with the European Commission for a relaxation of the ban, with politicians at home calling for reprisals against European products imported into Britain, like French apples. Cynics soon remarked that BsE haicome to mean "Blame somebody else". Meanwhile, the Tory Party is tearing itself apart, especially over the threat to the pound sterling from plans for a single European currency. The beef ban was invoked to prove how British sovereignty had ebbed away to Brussels.

In short, there is a huge mishmash of half-truths, illogicalities, misrepresentations and enormous losses to farmers, food processors, transport companies and shop keepers, with damage to relations with friendly countries to boot.

One of the few positive aspects of the whole affair is the public revelation of what really goes on in Britain's ',highly efficient (as economists see it) farming industry. The actual cost of cheap food may be far higher than environmentalists ever thought. The option of slaughtering all of Britain's cattle at a cost of f 12 billion (us $18 billion) in compensation alone, has actually been mentioned. A horrified populace has now come to learn that cows have been fed on sheep carcasses - brains, hooves and bones too; that chicken manure and bits of beaks and claws are fed back to poultry, and that the most farmed herbivorous animals are fed industrial fish (fish of any kind and size intended for processing on an industrial scale, raiher than for sale in shops), vacuumed up from the polluted and nearby North Sea. Incidentally, such fishing bits lowered the fish stocks to dangerous levels and affected the survival of sea birds. The public have learned about the boiling and processing of carcasses, hides and bones after the butchers have taken the meat for human consumption.

It would be nice to report that the 'virtuous' organic farmers with disease'-free herds - fed on grass - have emerged with increased respect and improved prospects. Alas3 the government's gesture to restoring public confidence involves slaughtering all cows 30 months old.

Perhaps the most important lesson for the authorities is to be found in a smaller letter in the British Medical Journal. A number of doctors interviewed 155 residents of south London on their knowledge Of BSE, and changes in their behaviour due to the knowledge of the risks involved. They concluded that even before the current scare, "The public seemed to have picked up on the uncertainty about the scientific evidence in the media, made up their minds and acted accordingly. The public are more sophisticated than we give them credit for; public health messages should take this into account. If people are given absolute answers to questions for which the evidence is uncertain, they seem not to get the message."

So, instead of arrogantly saying that "there is no cause for alarm", authorities might try something like: "We know you are somewhat worried about - whatever it is. So are we, and we have our best scientists trying to get as near as possible to the truth."