The protection of Geographical Indication is not a guarantee that the artisan or producer will benefit; traders can corner the premium 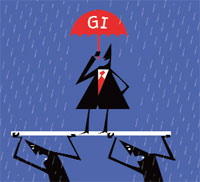 India’s love affair with Geographical Indication (GI) never stops, and never ceases to amaze. From Alleppey coir, Sujini embroidery and Sikki grass work to Central Travancore jaggery, a baffling range of goods and crafts have been granted GI, a form of intellectual property (IP) based on geography and tradition that involves some unique means of production.

This column has noted on several occasions the passion of many people for their traditional crafts and crops, all of which they want to protect with a GI tag—lamps, drums, stringed instruments, textiles, rice, jasmines, roses, grapes, mangoes, snacks, broths and even a wet grinder! This penchant for GI is curious. What drives, say, a milk cooperative in the small town of Srivilliputtur in Tamil Nadu to apply for GI for their palkova? And what, pray, is palkova? It’s nothing but a sweet made from boiling milk for some hours, condensing it and adding sugar towards the end. I have no doubt that Srivilliputtur’s confection is justly famous in the region. But to go through the tedious process and getting a GI, preparing the documentation and paying the costs of protecting this IP for 10 years at a time makes little economic sense. It beats belief that competing makers of such condensed milk concoctions, from near or far, would want to pass off their stuff as the Srivilliputtur McCoy.

Perhaps, such IP protection makes sense in the case of pashmina, a fine cashmere wool made from the fleece of the high-altitude pashmina goats of Ladakh. The weaving of pashmina fabrics, usually shawls and stoles, is a heritage craft of Kashmir that has been badly hit by machine-made lookalikes that use a combination of other wools mixed with pashmina to earn the premium that the genuine article commands. Kashmiri pashmina got its GI registration some four years ago but it was only in August this year that a high-tech, tamperproof label was introduced to protect its IP.

Such measures cost money. In the case of pashmina, the Jammu & Kashmir government is footing the bill for the project which reportedly cost `4.4 crore. But that’s small change given the objective: to revive traditional processes of making pashmina in Kashmiri homes. The idea behind the labelling is to eliminate mechanisation in the manufacture of the shawls since it’s here that the mixing of wools takes place.

In general though, GIs appear to be a mixed blessing for the artisan. Take a look at the famed Banaras sari, at one time the ultimate choice for wedding finery. In recent decades, the iconic silk sari has been mauled by technology and trade liberalisation. Powerlooms produce these brocade fabrics once made by master weavers, and synthetic silks from China have forever destroyed its purity. But that’s not all of its problems. A dissertation study by Amit Basole of the Graduate School of the University of Massachusetts, Amherst, shows that GIs create their own set of problems on the question of authenticity. Banaras saris and brocades were given the GI in October 2009, following which attempts were made to standardise the Banaras sari to protect its authenticity against competition from imitation items made on powerlooms.

Basole found that the criteria of authenticity had been developed mostly without consulting artisans and as a result tended to be overly restrictive.

“And it changes nothing with regard to the structural factors that keep weavers poor. In the process it can punish those weavers who try to compete by means of technical change, since they are told they can no longer avail of their product's brand value.”

Because the GI outlines both production practice and design specifications in great detail in order to make a strong case for the uniqueness of the product, it tends to stifle innovation by enforcing rigorous standardisation of the processes and practices.

In general, it turns out, GIs do not always enable producers to get a fair share of the benefits of this IP protection unless they have strong bargaining power. In a paper presented at a 2011 WIPO Worldwide Symposium on GIs, Cerkia Bramley of the University of Pretoria says that producers even in Europe do not automatically benefit from a GI. And in India, the situation is worse, because “it is the traders and not producers that capture the largest share of the economic benefits that flow from the GI.”

Although GIs clearly have the potential to improve livelihoods of producers in developing countries, “this is highly dependent on how equitably the actual benefit is distributed along the supply chain,” says Bramley. Indian researchers have also been flagging this issue. In a 2009 journal article, Surbhi Jain of the Ministry of Commerce had pointed out that most GIs in South Asia are linked to products in sectors that provide livelihoods to the poor. As such, the entire supply chain needs to be examined to ensure that the development implications of GI protection are not nullified.

Any second thoughts in Srivilliputtur?