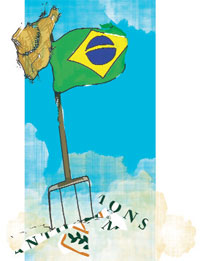 Patent laws governing the use of genetically modified (GM) seeds are downright crazy. For one, royalty on GM seeds never ever ends. While all other products are governed by the “doctrine of exhaustion”, which means that a patent-holder’s rights in a particular product are “exhausted” when that product is sold to an end user, in the case of GM seeds, companies such as Monsanto can impose royalty even on third and fourth generation seeds. And thereby hangs an irrational tale of royalties.

It is a double whammy for farmers, particularly in the US. Farmers who do not wish to grow GM crops and opt for conventional seeds or want to be organic farmers get penalised if their crop gets contaminated. Instead of being penalised for contaminating non-GM crops, Monsanto gets paid for it in a crazy patent system in which those who suffer the consequences of contamination are held liable.

The Vernon Bowman v Monsanto case in September 2011 is a telling example (see ‘Monsanto does it again’, Down To Earth, May 1-15, 2012). That’s when the world’s largest biotech seed company prevailed yet again. The Indiana farmer was fined $84,456, although he had planted seeds sold in a mix of undifferentiated “commodity” seeds. The Court of Appeals in Washington affirmed a lower court decision that favoured Monsanto.

Commodity seeds come from farms that use Roundup Ready technology as well as those that do not without differentiation. Buyers do sign licensing agreements that are normally required with such seeds.

Here’s the bizarre twist: Although the court found that those agreements do not extend to second-generation seed, it said growers could not replicate Monsanto’s patented technology by planting it in the ground to create “newly infringing genetic material, seeds and plant”.

Since farmers don’t win lawsuits against Monsanto it’s natural that any case where they do so makes headlines and is cause for celebration. Right now farmers in Brazil are jubilant that they have won their case against the American multinational on unjust royalty collection.

The tables appear to have been turned in the South American nation where five million farmers, large and small, banded together to take on Monsanto in a class action suit four years ago. They have won so far, although Monsanto can still appeal to the country’s Supreme Court. The US multinational brazenly collected 2 per cent royalty or trait fees from Brazilian farmers, although its patents had long expired! Brazil is the second largest soybean producer in the world and an overwhelming majority of farmers use Monsanto’s GM seeds.

In 2009, farming syndicates in the southern state of Rio Grande do Sul contested the levy or royalty, arguing that it was an unjust tax and that it was virtually impossible to keep Roundup Ready soybeans separate from conventional varieties.

The point is that GM soy is highly contaminating and farmers were being penalised for something beyond their control. But the seed giant maintained that it had right to charge the 2 per cent fee—this is charged on each farm’s total soy sales—in perpetuity once their seeds were found to contain some of its patented genetic traits.

There is an interesting history to GM soybean in Brazil. Transgenic soy seeds were smuggled into Brazil from neighbouring Argentina from the late 1990s since the use of this technology was banned and subject to prosecution until the last decade. Since legalisation, Monsanto has charged Brazilian farmers 2 per cent of their sales of Roundup Ready soybeans, which accounts for close to 85 per cent of the country’s soybean crop. Monsanto is also careful to test even those soybean sold as non-GM, and if they turn out to be Roundup Ready, it charges the farmers a higher trait fee—3 per cent of their sales.

In April, a judge in Rio Grande do Sul ruled in favour of the producers and ordered Monsanto to return royalties paid since 2004 or a minimum of $2 billion. Monsanto appealed and a federal court ordered that the ruling would apply nationwide. Now Monsanto will have to pay the $7.5 billion back. “The law gives producers the right to multiply the seeds they buy and nowhere in the world is there a requirement to pay (again),” argues the farmers’ lawyer. A decision on this may take years and meanwhile Monsanto continues to collect royalties. But Brazilian farmers expect they will win in the end. If so, it could spark a series of legal challenges elsewhere, too.

In India, Monsanto has collected trait fees amounting to an estimated Rs 2,000 crore since 2002 when its GM cotton made its debut here. It charges an upfront technology fee of Rs 50 lakh each from its Indian licencees and also collects royalty on every packet of its Bollgard Bt seeds. The trait fee accounts for as much as two-thirds the cost of each packet. Wait and watch what happens in Brazil.