By S A Shah 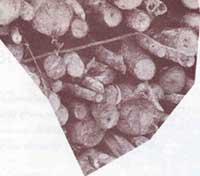 A TIME will soon come when the health and wealth of a nation will be measured in terms of its biodiversity. This will be the foundation of the development of future technologies. It is this wealth that is facing destruction today.

Biodiversity is a part of the larger ecosystem in which all life forms are inter-woven. The developing countries' record regarding the commercial use of renewable resources is not satisfactory. In Gujarat, commercial exploitation of Gum Kadaya and Gum Gugal has virtually wiped out the plants producing them. Also, some of the flora associates of teak have become extinct from some areas where they previously existed. The situation elsewhere in the country is no better.

The real question is, therefore, how to contain this destruction of biodiversity? First of all, we should study all the aspects of the current exploitation practices -- the identification and cataloging of plants currently exploited unscientifically. I have seen a few areas where introduction of conservation practices have yielded excellent results. In Dantali village of Vyara taluka of Surat district, illicit commercial felling was so heavy that the forest functionaries could not enter the forest. An innovative forest officer, R S Pathan, brought about a remarkable change, which resulted in conserving biodiversity there, and at the same time satisfying the people. He converted illicit felling into organised cultural operations.

Two fundamental issues do not appear to have been addressed in all the discussion preceding***, since the earth summit. One: do we have adequate ecological knowledge of how much to harvest, maintaining ecological stability? And, 2: do we have a complete biological inventory of the plant species in the developing countries? Unless we have this knowledge I do not think we have a moral right to exploit plant products for commercial purposes.

Another fundamental issue that concerns the present use of several plant products by the local forest dwellers. Their knowledge regarding the usage is not fully documented anywhere. In such a situation, commercial exploitation of some of these products may undermine the cultural and emotional fulfillment of the forest dwellers.

Participating of the local people is a must. I fear that under the garb of the biodiversity convention, money will flow into the developing countries and the plant products would flow out of them, without adequate attention being paid to sustainability.

The convention has recommended the identification of the important components of biodiversity. In nature's scheme, however, every lifeform has its own ecological niche and importance. Therefore, to rank some lifeforms as important, and, by implication, the rest as unimportant, is inconsistent with ecological principles.

The recommendations regarding the establishment of Protected Areas is excellent. It should be implemented at once. But the local people should be active participants in establishing them, and then become the major beneficiaries. The protected area should in no way reduce the local people's access and utilisation. But this is not going to be an easy task.

As is well known, the developing countries, rich in biodiversity, are hard pressed for foreign exchange. There are all the chances, then, that the developed countries may dictate the terms of agreement in this inequal trade.

The time is not yet ripe for commercial exploitation of biodiversity. We must first learn how to conserve it before we start exploiting it. Let us admit that our knowledge of research for conserving biodiversity in tropical forests is, at best, inadequate. In the given state of affairs, the commercial exploitation of biodiversity to support the consumerist and wasteful lifestyle of the industrialised countries, and the affluent elites of the developing countries, in utter disregard of the laws of nature, is immoral. Nay, it is a heinous crime against nature.

---S A Shah is a former officer of the Indian Forest Service.