Crimes against the environment 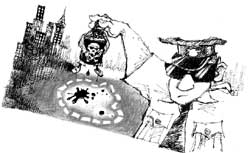 on an evening in April 1980, a series of explosions rocked the two-acre site in Elizabeth, New Jersey, where 40,000 drums of chemicals were stored. In no time, a savage fire with fierce colours lit up the sky over the New York metropolitan area. It took more than ten hours to control the flames.

The president of the company where the chemical fire started was sentenced to three years in jail. Thereafter, the politicians resolved to criminally prosecute polluters in New Jersey. Each investigator within the bureau was trained and equipped to respond to environmental crime and to collect evidence. ecb investigators developed field testing procedures to screen samples with the potential to exhibit characteristics of hazardous waste, and in addition began receiving and maintaining federal occupational safety health act certification for working in areas where contact with hazardous material is likely.

In the early 1970s, the us Congress laid the groundwork for environmental enforcement on the federal level with the enactment of criminal provisions in the Clean Water Act, Clean Air Act, and the Resource Conservation and Recovery Act. However, it was only in 1981 that the environmental protection agency opened its office of Criminal Enforcement. By that time New Jersey had already started actively combating environmental crime at the state level.

The unique aspect of New Jersey's ecb is that it has more authority, since it is one of the very few states where the criminal justice division falls under the state attorney general, who is the chief law officer in the state. The ecb, here, has access to multiple expertise because of the way it is set up.

There are a number of departments like technical and forensic skills, judicial, investigative (police), and environmental. All of these are placed under one roof to work as a team and to eliminate the red tape of working through multiple departments and borrowing of expertise.

The state of New Jersey is the most densely populated and industrialised state, with chemical, pharmaceutical, and petroleum industries representing large and vital components of the state's economy. While the chemical industry is the largest industry in the state, the second largest is tourism. It contributed over $20 billion to the state's economy in 1995. Therefore protecting the state's shore and highland areas is important from both economic and environmental point of view.

Edward Bonanna, current supervising deputy attorney general and deputy chief of the ecb , has been with the division of criminal justice for the last ten years. According to him, "environmental crime has evolved in the last one-and-a-half decade and instances of midnight dumping of toxic waste have now become more sophisticated and part of the more organised crime network. The result has changed law enforcement tools and techniques accordingly, making them more modernised and effective. For instance, devices like thermal imagers, which detect heat differentials to pick out hazardous material more easily have been introduced to combat dangers of being exposed to hazardous chemicals and to minimise risks to public and investigators.

Bonanna said that the ecb was focusing more and more on strengthening their investigative expertise since experts were needed in a variety of backgrounds such as corporate law and finance. Thus the ecb not just targets midnight dumpers but also those who pose the grave threat to the integrity of the regulatory system. Petty environmental crime still occurs and is attended to by county prosecutors and if necessary by the ecb. However, the focus is now more on nabbing big time offenders.

Investigations into environmental crime are no different from investigating homicide or robbery. A crime scene is secured and investigated thoroughly through forensics and laboratory research followed by legal action against perpetrators.

The case to follow is an example of how the results of an environmental crime can often be as deadly as other crimes. In November, 1996 a sanitation worker was killed when he came in contact with corrosive acid that had been improperly discarded. Another co-worker was seriously injured. The New York city has a 117-member Sanitation Police Department, whose focus is not drug dealers or murderers but the 30,000 tonnes of waste that New Yorkers produce each day. One of their main duties is to see that hazardous and toxic wastes do not enter the city's waste streams.

These officers are trained much like other city police officers, wear the same uniforms and bullet proof vests and carry the same guns. The only distinguishing feature is the arm patch that reads sanitation police. The sanitation police undergo a six-week training program. They have the authority to book violators. In the case of the dead sanitation worker, the Sanitation Police, the New York Police Department and the Department of Environmental Protection are working closely to bring the violators to book. A criminal investigation is on, with prosecutors trying to establish grounds for a murder charge.

The Ciba-Giegy case was the New Jersey ecb's first foray into complex environmental litigation. In 1984, the ecb investigated the disposal practices at the Ciba Giegy Corporation's landfill site in New Jersey. This landfill was not permitted to receive hazardous waste. In 1985, Ciba-Giegy Corporation and two of its officers were charged by a state grand jury with water pollution and abandonment of hazardous waste and toxic pollutants. Six years of pre-trial litigation and two appeals later, the individual defendants were charged us $25,000 each while the corporate defendant paid a criminal fine of $3.5 million and a $5.5 million civil penalty. As part of the settlement, Ciba-Giegy Corporation also paid for remediation under the Comprehensive Environmental Response, Compensation, and Liability Act and for oversight costs.

In 1990, yet another big industry name was under the microscope. Exxon Oil was indicted for a spill of some 567,000 gallons of heating oil affecting the waters of both New York and New Jersey. Under the joint investigation, Exxon pleaded guilty in federal court to a negligent violation of the federal Clean Water Act. Under the terms of the joint settlement Exxon paid a total of $5 million in fines and costs of prosecution to New Jersey, New York, and the federal government. Additionally, a civil settlement was filed in federal court requiring Exxon to pay $10 million for natural resource damage.

It is interesting to note that the money from these fines goes into the state treasury and is used among other things for various types of environmental cleaning up work.

Among the success stories there are those which do not result in direct impact. In the case of mishandling of medical waste, the ecb prosecuted a blood lab and its vice-president for dumping blood vials, some of which tested positive for hepatitis B virus, into the Hudson river. However, the court did not rule favourably in this matter. This was because the evidence showed that the presence of the hepatitis B surface antigen was 'potentially infectious' rather than 'actually infectious' and the legal conclusion that a single isolated incident of discharge does not constitute a water pollution violation.

Despite the adverse result, the ecb deterred similar activity and convinced the legislature that criminal provisions to proscribe the mishandling of medical waste were needed to fill a statutory void. As a result, the Comprehensive Regulated Medical Waste Management Statute was enacted in 1989.

One of the frustrations for the prosecutors of environmental crime has been that the juries are not able to relate to the intensity of damage, nor assess its far reaching consequences. Therefore in many cases it was difficult to obtain sentences.

The changing face of environmental crime and a general resource crunch is also affecting the program. The ecb cannot afford to take on every violator. It needs to narrow down environmental policing to concentrate on the big 'bad actors', it may mean that smaller crime may go unnoticed in some cases.