Faced with food surpluses, farmers in the UK are being encouraged to plant trees on part of their land and sell wood as fuel for heating or generating electricity. 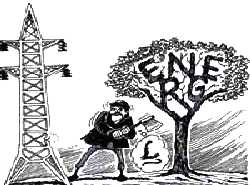 THESE are difficult times for UK farmers. Food surpluses are forcing land to be taken out of food production. In many instances, farmers are being paid to leave their land idle - the system of "set-aside" payments - but this fails to compensate fully for falling incomes. Farmers have been looking for other ways of making money from their land and some have even been forced to sell their land.

Fortunately, and to the relief of all those who wish to see the countryside retain its essentially agricultural character, an option that is now emerging is arable energy coppice - growing wood specifically for fuel.

Some wood - the residue from conventional forestry operations - is available for exploitation as an energy source right now. But if wood is to make a major impact, a greater resource will be required. Research sponsored under the UK government's Wood as a Fuel Programme has shown that 5 million he of land will be surplus to arable requirements by 2010 and if this land was utilised for coppice-growing, wood could meet more than half of UK's electricity generating needs. Besides, the growing of coppice requires minimal tending, improves soil fertility and composition and ensures regular income to farmers.

The Wood as a Fuel Programme was launched in the late 19708. Initially focusing on basic research and development, the programme's 'emphasis later progressed to coppice-growing trials at experimental sites around the country. Most recently, work has begun to concentrate an coppice production and utilisation.

As a result of these efforts, the basic steps in successful coppice-growing are now well-known. Resilient, fast-growing species such as willow and poplar are best suited to UK's climate. Poplar is most appropriate to lowland sites and willow to more marginal areas. The cuttings can be planted about a metre apart, at a density of 10,000/ha.

To ensure the plants grow well during the first year, conscientious weed control is essential. When the trees are a year old, they are cut back to just above ground level. This is known as the "maiden cut" and allows the stem to sprout several shoots, thereby increasing the potential yield of wood from one tree. It is this sprouting process that is known as "coppicing". Harvesting of wood can then be carried out every three to five years.

Although traditional harvesting techniques can be employed, a specially designed coppice harvester can cut through sticks of willow or poplar with a circular saw, pull them into a bundle and bind them up. Once harvested and dried, the wood is chipped, ready to be burnt as a fuel to provide either heat or electricity.

These basic principles have been put into effect at energy coppice research sites all over UK and have demonstrated that arable coppice is a viable option for the country.


Despite this potential, it was recognised that some farmers might be discouraged from turning land over to energy crops because of the capital outlay needed to bring about such a switch. To solve this problem, UK's Forestry Commission has made establishment grants available and has extended its Woodland Grant Scheme to include short rotation coppice.

Innovative work has been undertaken in recent years to appraise the potential of arable coppice for energy in the UK. That potential is now apparent, but there remains some i4ay to go before it is realised. There are two major hurdles that remain. One is information: How can farmers switch over to energy coppices if they are unfamiliar with the concept? The second hurdle is even more fundamental: the current lack of a market for wood fuel in the UK. With fossil fuels dominant, wood is a minor source of energy even in rural areas.

To combat lack of awareness, the Wood as a Fuel Programme is striving to make the facts known through targeted publications and conferences. But the market obstacle gives rise to a dilemma: If a market for wood fuel does not exist, how can farmers be persuaded to grow cappices? And, if farmers do not produce wood fuel, how can a market develop in the first place?

A clear indication of the future of wood fuel will be provided by farmers' cooperatives. Their success or ultimate failure will reveal how soon and to what extent wood - a valuable yet often overlooked energy source-can help the UK meet its future energy needs.