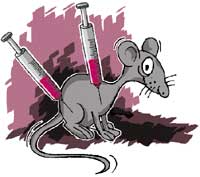 are the interests of humans and animals accorded equal weightage? Or, do human beings, who represent the highest form of life, have supreme rights? For the past 200 years, these questions have become points of controversy in the West, between bioscientists, who felt that animal experiments were indispensable for learning about humans, and animal lovers, who hated the suffering that the creatures were subjected to under experimentation. While arguing that it is sinful to ignore the rights of animals just because it was not human, they urged the researchers to consider whether an animal can suffer.

There is no denying that the role played by animals in the progress of medicine has been invaluable. But during the past 30-40 years, increased concern for animals among the public, as well as scientists, is changing the way in which animals are being used for research. From the 60s, efforts were on to develop alternative methods of research in order to eliminate the need for animal experiments. These efforts received financial support from both governments and private organisations. The alternatives to animal research included cell cultures, statistical techniques and epidemiological studies.

However, most research studies involving complex organ systems cannot be replaced by tissue culture and other techniques. Animal research remains a necessity, but legislation in several countries has ensured a more humane environment for animals.

The repercussions of the animal activists movement has been felt in India too. The animal welfare acts passed by several governments led to the steep increase in the cost of the care and maintenance of laboratory animals; so much so that many laboratories found themselves unable to cope with escalating expenses. Multinationals, attracted by lower costs, set up laboratories in the developing countries. Soon the animal activists turned their ire on these companies, medical colleges and institutions where dogs from municipal pounds were used for teaching and research. They were able to force the local self government to ban the practice of catching stray dogs even at the risk of spreading rabies.

They succeeded in arousing public sentiments against the use of animals in experimentation. It was not long after that the Committee for the Purpose of Control and Supervision of Experiments on Animals ( cpcsea -- a body set up by the Animal Welfare Board of India) imposed restrictions on all animal research in the country.

The cpcsea laid down a set of rules which were published in the Extraordinary Gazette of India on September 8, 1998. The rules state that every experiment using animals in the country would require the prior permission of the cpcsea. Animals can not be used for teaching purposes or acquiring surgical skills. The transfer/export of certain strains of laboratory animals was banned.

The government was forced to implement these rules, which ensured that all research work came to an absolute standstill due to the non-availability of animals. Biological scientists rallied as one against the threat to their profession and organised various symposia and seminars to present their side of the story. At these gatherings, scientists reiterated the importance of humane treatment of all experimental animals. They also agreed that Animal Care and Use Committees should be established in each institute, which would supervise the day-to-day procedure in animal research. The rules state that ecological considerations should to be given top priority when dealing with the use and export-import of animals caught in the wild.

The scientific community kept up its pressure, forcing the government to intervene and prevent the cpcsea from implementing its rules. The upshot of all this is that this body modified its rules and agreed to assume the role of a central controlling authority. It relaxed the rules governing only the import of animals but not the export of the same. The cpcsea also refused to define the term animal even in its modified document.

The controversy ended in a major victory for the Indian scientific community but it also carried a few important lessons. Prime among these is that ethical considerations should strictly govern the use of animals in research and needless animal experimentation should be avoided. Modern animal facilities with suitable environmental controls would ensure the quality of the animals used. The scientists should ensure that the number of animals used in their studies is just sufficient. Every institution should have proper Ethics Committees to implement the necessary guidelines for the use of animals in research and teaching.

The author is a free-lance writer based in New Delhi