The storm damaged houses, crops and livestock of people in the tribal belt but government has not even taken note of it

The storm damaged houses, crops and livestock of people in the tribal belt but government has not even taken note of it 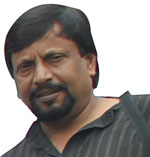 Cyclone Hudhud that landed near Visakhapatnam and destroyed infrastructure in coastal Andhra Pradesh had a devastating effect on Odisha as well. Thousands of trees were uprooted and tribal huts damaged on October 12 and 13 by high speed winds and incessant rains.

This was first cyclone experience for the people in Koraput’s history. Senior citizens say they have never experienced such kind of wind speed in their life. As per government records, the highest wind speed was 170 km per hour and lowest was 50. Koraput people had experienced flash floods but not cyclone of such intensity.

Though I had experience of some cyclones (being born in coastal plain of Odisha) but had an impression that I am protected as far as cyclone is concerned because I have been staying at Koraput for the past 20 years.

The sudden cyclone exposed the lack of preparedness of the government, civil society and people. Suddenly, there were announcements about the need for evacuation of hill slope villages to nearest safer places like schools and anganwadi buildings. In a desperate mode, I passed the message to all my 165-team members to help people in evacuation.  But I wondered how safe would be the schools and anganwadi buildings. I know about the poor quality of construction of government buildings in the tribal areas because of the corruption involved. There are many instances when children in tribal pockets are injured by wall collapse in schools. Even patients are injured in primary health centre (PHC) buildings while undergoing treatment. I thought the tribal huts would be a safer place as nobody will die because of mud wall collapse. My fear was that if some government school building will collapse there would be loss of life.  Many such schools and anganwadi buildings collapsed on the night of October 12 night, but thank God nobody were inside these structures.

Many people, out of fear, came out from their villages to take shelter in school buildings. But at many places the schools were locked and keys were with teachers who stayed far away. The teachers did not bother to come to open the locks, though government had instructed all its employees to help community in evacuation and providing food during the shelter. In many places, our team members broke the keys and entered the building. But there was no food available during night. At some places, our team members broke the storage room of the school as there was stock of rice and daal for the mid day meals provided to children. They prepared food for the night.

The district administration instructed the lower level officials to distribute five quintals of rice and other materials to each gram panchayats but lower level officials hardly ever carry out orders in tribal areas. At many places people remained hungry as they thought it would be a crime to break the key. Radio is still popular among the tribals and through it they came to know about the cyclone warning.

The night of October 12 was very painful for all; the sound of wind, rain and felling of trees was furious.  Many villagers came to the schools with only the clothes they were wearing. When they returned to their village on October 13 in the afternoon, all their food stocks were damaged.  No food relief came from the government.

As these so called “uncivilized” tribals have the values of community feeling, other villagers served food to homeless people.  In Koraput region, people have small huts with thatched roofs; only a few people manage to build tiled, tin or asbestos roofs with their hard labour and after taking loans from money lenders. Most of the vulnerable families like the landless, single women, widows and old people have the homes made of mud walls and thatched roof.

The only relief from government is polythene sheets and that too in insufficient numbers. Many roofless and homeless have taken shelter in the verandas of homes of other people.

The damage to livestock and crops was also huge. Many people found their goats, cows, bullocks and poultry dead.  They also found standing crops of paddy, ragi, minor millets, maize, pulses, horticultural crops like tamarind, mango, cashew, coffee, cotton, pepper on the highland hill slopes destroyed. Koraput region practices rainfed agriculture and they have to wait another 365 days for the next crop. Many people lost their seeds and they have to borrow from moneylenders to purchase seeds for next year’s crop. There is already distress migration in the region and in coming days it will double as people in search of job will be desperate.

If MGNREGA is implemented properly some people may remain in their village.

On October 15, the Odisha chief minister declared Rs 5 crore aid to Andhra Pradesh and 7 per cent dearness allowance hike for employees from the last July. But he remains silent about rehabilitation and compensation to tribals of south Odisha. On October 16, the chief minister shot off a letter to the Centre for Rs 500 crore as assistance; it is clearly evident that he has passed the responsibility of relief and rehabilitation to the Centre.

They suffer in silence

On the ground there is priority to restoring the electricity line, which is only needed in urban pockets. Majority of villages are off grid; if at all they get electricity under Rajiv Gandhi Grameen Vidyutikaran Yojana, only the poles and wires exist but there is no power. As per government, the assessment of loss is going on but nobody knows whether the officials will calculate crop and livestock losses properly. The tribals have no political clout, so the state is indifferent and it seems that already marginalised people will be discriminated against even in a disaster situation. If similar or less intense disaster were to happen in coastal region, the response of the state would have been different. By nature tribals are silent and for that only they are suffering. Many opposition leaders visited Koraput region on October 17 and shed crocodile tears but I am sure they would have responded like the present dispensation had they been in power.

Last week’s experience has imparted quite a few lessons and raised many questions. The learning is that there is need to build preparedness in tribal pockets of hilly region against cyclones and other disasters.  We cannot afford to ignore it anymore.  There is need for cyclone shelters in this region also. All school buildings and other government buildings should be strong and earthquake resistant structures.

All tribal people are talking that the high hill God (Dongar Devta) saved Koraput region by controlling the wind speed and protected them from large-scale devastation like the one in Vishakhapatnam area. But the way bauxite mining is going on in the Koraput region, what will happen when each high hill and God will disappear from the landscape? The big question is a cyclone visited Koraput region for the first time. Even Britishers have never documented any instance of cyclone in this region. Is it the impact of climate change, global warming? If it is the impact of climate change, then thinkers and policy makers have to shift their focus from coastal plains to highland regions. The innocent tribals who are living and nurturing the nature and environment without any carbon footprint will suffer in future for things they are not responsible.

Bidyut Mohanty is founder and secretary of non-profit, Society for Promotion of Rural Education and Development (SPREAD), based in Koraput